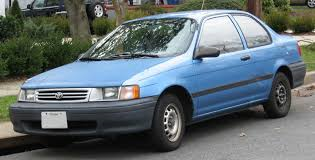 GLOUCESTER COUNTY, Va. – The Gloucester County Sheriff’s Office is looking for a 31-year-old female suspect that they believe allegedly stole a Toyota Tercel from a senior citizen, according to officials.

The suspect is Gloucester resident Cathy Marie Chapman, and deputies say that on January 28 she stole the blue 1996 Toyota Tercel, Virginia tag WXM-5654,  from the senior citizen victim.

Officials believe that Chapman could be in Newport News.