VIRGINIA BEACH, Va. - A man and a teenager have been displaced after a mobile home fire Wednesday morning.

The Virginia Beach Fire Department was called to the 2400 block of Oconee Ave at around 8:45 a.m. after calls from neighbors about a mobile home on fire.

Heavy smoke and fire could be seen coming from the home. Fire officials said it took a little over 20 minutes to get the fire under control.

No one was injured in the fire, officials said.

The two displaced occupants, a man and his son, are being assisted by the Red Cross.

The son and other kids were getting on a school bus just feet away when the flames started.

"As we got on the bus, the entire trailer has flames on top of it and I didn't know what was going on," said Billy Grey, 11.

The fire was contained to the one unit although the unit next door sustained some minor damage cause by the heat from the burning home.

Virginia Beach Fire Investigators said the fire was accidental in nature but the exact cause remains under investigation.

The homeowner didn't want to speak on camera, but tells News 3 an electrical issue was behind the flames and that home and everything inside were destroyed.

A GoFundMe account has been set up to help raise money for the family. 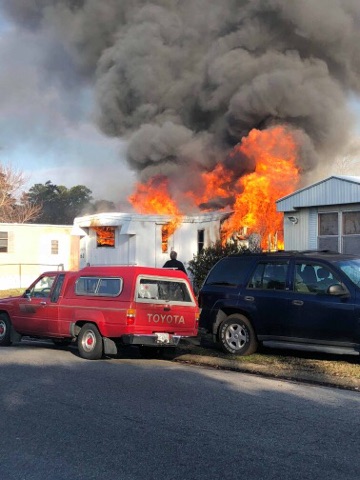