VIRGINIA BEACH, Va. - The Virginia Beach Police Department responded to a vehicle crash on Monday involving a school bus that sent seven people to the hospital.

Four of the seven taken to the hospital are children, all reportedly with minor injuries, according to a Virginia Beach Police Department tweet.

The incident was at the intersection of S. Independence and Edwin Drive, which is near Mount Trashmore.

According to an official with Virginia Beach City Public Schools, the bus is school bus number 325, and the bus was traveling from the Secep Program at Renaissance Academy. Parents have been notified and that there was an administrator at the scene of the crash.

The intersection of the incident is closed because of the crash and traffic in both directions is being diverted, according to officials.

This is the second school bus in Virginia Beach that was involved in a vehicle crash within the last week. The last school bus crash was on February 5.

Traffic on I-264 had been affected because of the crash but is now back open.

Stay tuned for updates from News 3 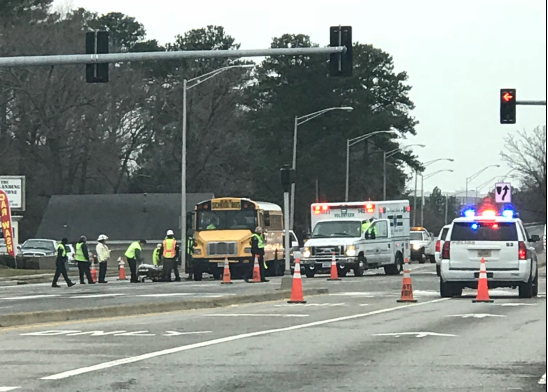 7 people transported to local hospital due to accident at S. Independence and Edwin Drive. 3 adults and 4 students, all reporting minor injury. More to follow when it becomes available.