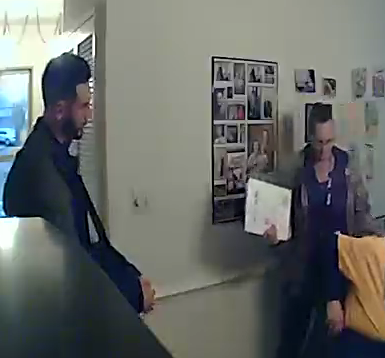 NEWPORT NEWS, Va. – The Newport News Police Department is asking for the public’s assistance in identifying the suspects involved in an attempted larceny on January 11.

Around 9:58 p.m. on the date of the incident, police responded to a home in the 100 block of Rexford Drive West for a report of a suspicious person.

Authorities were advised that the 100-year-old homeowner was home alone when a white female and a white male came to the house offering services to work on roofing, siding and windows. The woman identified herself as “Kelly” and had dark hair in a bun, wore glasses and appeared to be in her late 30s to early 40s.

The couple walked into the kitchen and the woman picked up an envelope containing cash, taking out the money.

The victim told them that his wife was watching the entire incident on home surveillance cameras and yelled at the woman through the camera to put the money back. The woman dropped the money, picked up her business card and the couple ran out the door.