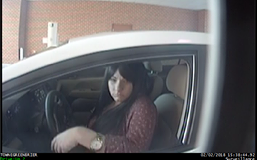 Deputies with the department responded to the 300 block of Village Ave. on February 1, after a report of vehicle larcenies in the area. The two victims had window damage from the car break-ins.

Officials say that among the stolen items were multiple checks, and the photos provided by YPSO are of the alleged suspect passing checks at various bank locations in Suffolk, Virginia Beach, Portsmouth and Chesapeake.

If you’re able to identify this subject or you have any information regarding this incident, please contact the York-Poquoson Sheriff’s Office at 757-890-4999 or Crime Line at 1-888-LOCK-U-UP. Please reference case # 1800415.