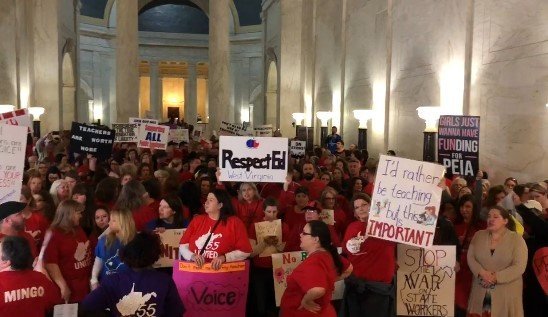 Public schools across West Virginia will remain closed through Monday as teachers and other school employees hit the picket lines, demanding higher wages and better benefits.

Teachers from across the state congregated in Charleston Friday morning, continuing the demonstration that had begun at the state capitol Thursday. Locally, teachers are walking picket lines in front of individual schools, according to Christine Campbell, president of the American Federation of Teachers-West Virginia. Every public school across the state’s 55 counties is closed Friday, according to data from the West Virginia Board of Education.

Organizers reported large crowds Thursday, with lines to get into the capitol to protest wrapping around the building. Campbell told CNN on Friday morning that similar lines were already beginning to form.

West Virginia employs nearly 20,000 classroom teachers in its public schools and has more than 277,000 students enrolled, according to Alyssa Keedy of the West Virginia Department of Education.

Protest at the capitol

On Thursday, teachers walked into the state capitol building in Charleston, according to Campbell. While some sat in the gallery during legislative sessions, others gathered outside the full galleries and continued their protests.

In other public areas of the capitol building, teachers chanted, “You work for us!” and “55 united,” a reference to the 55 districts that are closed. They also carried signs with slogans such as “Respect Ed” and “No recess until YOU clean up this mess.” Campbell told CNN that the line to get inside wraps around the building.

“The most important thing for us right now is public education and that we’re standing up for our students and our colleagues,” Campbell told CNN on Thursday.

While their teachers are picketing, students are getting some support in their communities. Teachers’ unions organized educators and service staff members to work with food pantries to send children home with extra food in advance of the school closures. Some community centers and churches are also hosting programs for students so working parents don’t have to stay home.

“We need to keep our kids and teachers in the classroom,” Justice said in a statement after signing the pay raise bill. “We certainly recognize our teachers are underpaid and this is a step in the right direction to addressing their pay issue.”

But the bill did not address further concerns of teachers, including issues with the teachers’ public employees insurance program, the rising costs of healthcare, and a tax on payroll deduction options, according to Campbell. The pay raise, which amounts to 4% over the next few years, is a reduction from an earlier version of the bill that proposed a 5% total increase in wages, Campbell said, also remarking that teachers in surrounding states make anywhere from $5,000 to $20,000 more than teachers in West Virginia.

“These things got everyone here, brought everyone here, and signing a bill at 8 o’clock at night wasn’t going to change that,” Campbell told CNN from Charleston on Thursday morning.

Lee, with WVEA, said the group told the governor “from day one” that the proposed pay hikes were not enough.

Passing cars are honking their horns in support of the teachers as they drive by the strikes, Lee told CNN on the phone from a picket line in Charleston Thursday morning.

“The support we’re getting is truly amazing,” he said.