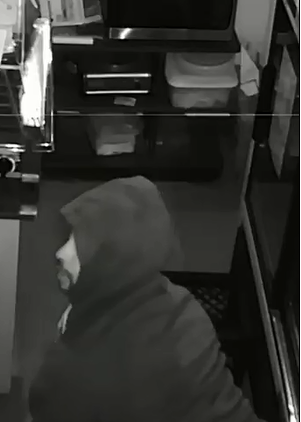 SUFFOLK, Va. – Police in Suffolk are looking for a burglary suspect that they believe is involved in two burglaries in the city.

Officials say that both burglaries happened on Bridge Station Road.

The first burglary happened in the 1600 block of Bridge Road around 10 p.m. on January 16.

This is when the suspect, police believe, forcefully entered the BP gas station on the road and stole a large amount of cigarettes from the store before fleeing the scene. During this incident the suspect was wearing a black sweatshirt with a white t-shirt underneath.

The second burglary happened on February 11 around 2 a.m., at a Shell gas station located in the 3700 block of Bridge Road.

The suspect, which police believe is connected to both burglaries, forcefully entered the store and stole a large amount of cigarettes. The suspect in this case was wearing red tennis shoes.

If anyone is able to identify the subject, please contact Suffolk Police or the Suffolk Crime Line.