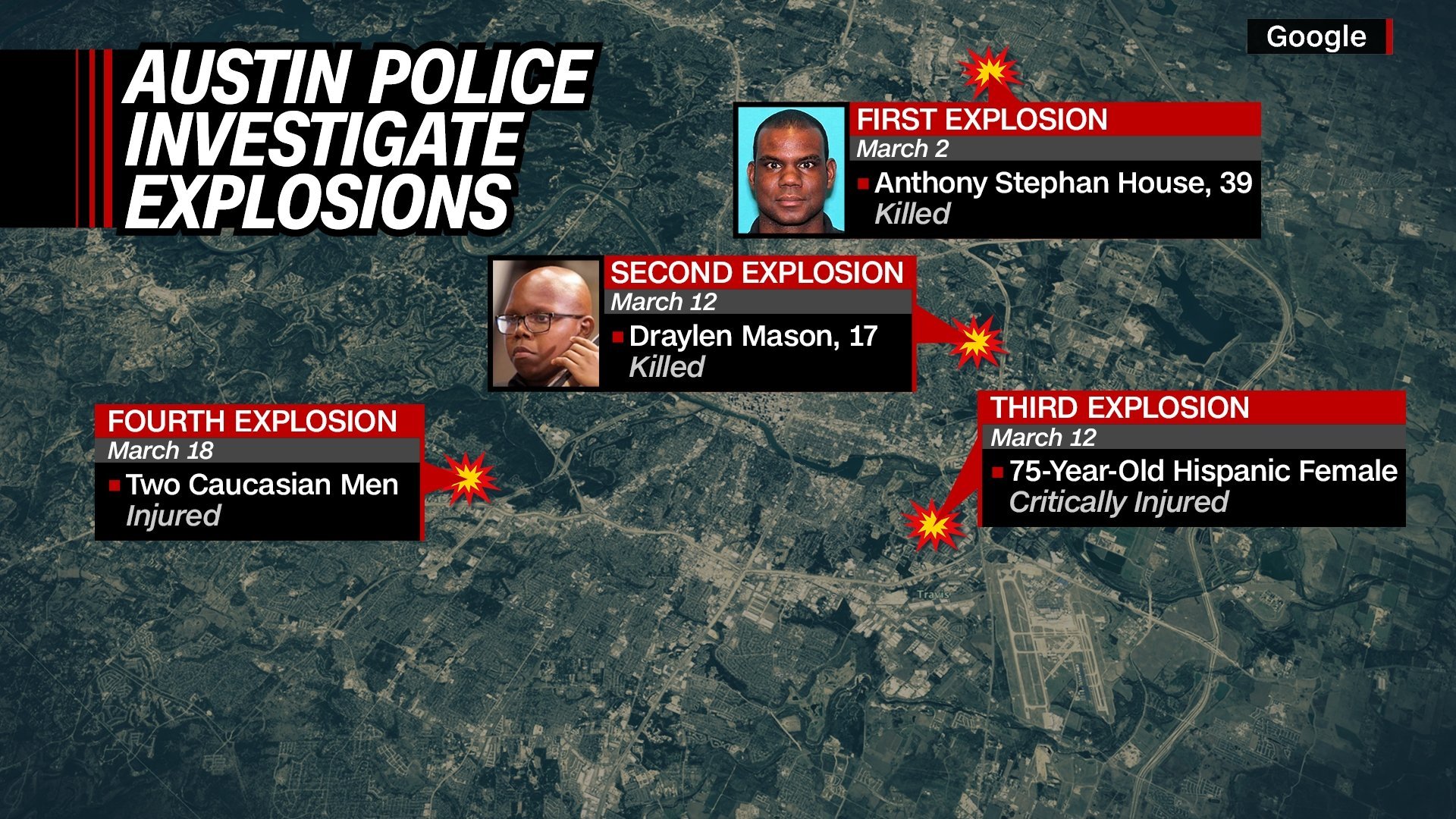 Austin police just confirmed what residents have feared for weeks — a suspected serial bomber is attacking their city.

For the fourth time this month, a device exploded on Austin residents. What makes Sunday night’s blast especially terrifying is that the device was left on the side of a residential road and triggered by a tripwire, police said Monday.

Investigators have found similarities between that device and three previous bombs, which were stuffed inside packages and left on residents’ doorsteps, Austin Police Chief Brian Manley said.

“We are clearly dealing with what we expect to be a serial bomber at this point,” he said.

Timeline of the bombings

And unlike the victims of the previous blasts, the two men wounded in Sunday’s explosion are white, Austin police said. Both men are expected to recover.

Many minority residents in Austin have been on edge since the bombings started, as the first three bombings killed or wounded minorities.

Several residents under lockdown Monday said they were stunned the latest attack happened in their neighborhood.

Unlike the first three bombings, which happened in east Austin, the latest attack happened in a predominantly white part of town.

Eliza May said because the first three bombings happening on the east side of the city, in predominantly minority areas, she hadn’t been following the news closely.

May said that as a resident of the affluent Travis Country neighborhood, she assumed she had nothing to worry about.

“We feel safe. This isn’t something that you’d expect around here,” May said.

Now, “it’s obvious that you have to be alert.”

“This was a random bomb,” she said. “This could have been any one of us.”

Neighbor Shonda Mace said the bombing “is going to be (a) life-changing event for our neighborhood.”

“I’m scared about what’s going to happen next,” she said.

Tripwire could give clues

“The use of a tripwire is far less discriminating than leaving parcel bombs at residences and suggests that the latest victims were not specifically targeted,” Stratfor Threat Lens said.

“The device’s success, despite significantly different design, further suggests that the bomb maker behind these attacks is an accomplished one, and has likely to have received some training, perhaps as a military or police explosive ordnance disposal technician.”

The latest blast came less than a week after police said the three previous explosions — in a span of 10 days — were connected. Those blasts killed a man and a teenager, and wounded two others.

The victims in those three explosions were African-American or Hispanic. Police have not discovered a motive, but have not ruled out the possibility those bombings could be hate crimes.

Police are working under the belief that the explosions are related. Manley said they’ll get a better idea with a post-blast analysis and examination of the device components.

In the meantime, Manley told residents not to touch or go near anything that looks suspicious.

“We now need the community to have an extra level of vigilance and pay attention to any suspicious device — whether it be a package or a bag, a backpack — anything that looks out of place,” Manley said Monday. “Do not approach items like that.”

Shortly before the fourth bombing, the reward for information leading to the arrest of anyone responsible for the three blasts increased to a total of $115,000, authorities said.

Officials have urged residents to call police with any tips they may have, even if the information seems to be “inconsequential.”