The states where disease and death are highest: A visual guide 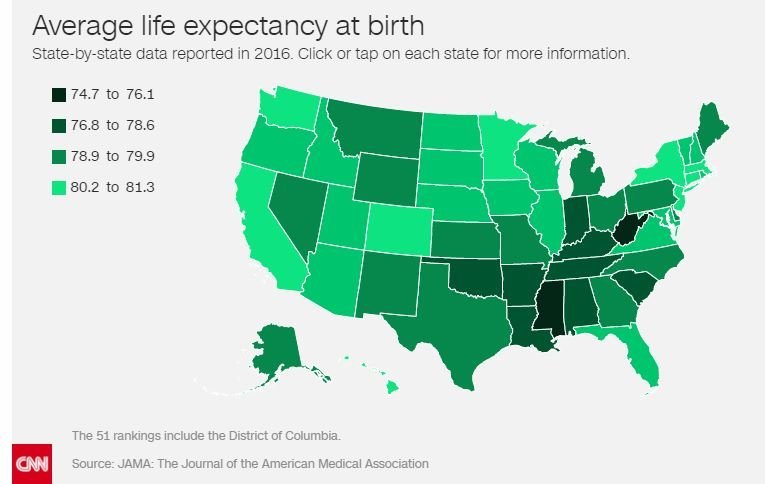 There’s no question that the impact of diseases varies drastically across the United States, depending on which state you live in.

Now, a study published Tuesday in the journal JAMA details just how wide those state-by-state differences are when it comes to how diseases, injuries and risk factors impact America’s youth, adults and older populations.

“There’s so many different levels of health in the US, so many different disparities across states and age groups,” said Dr. Christopher Murray, a professor of global health at the University of Washington and director of the Institute for Health Metrics and Evaluation, who was lead author of the study.

“The top five risk factors — diet, obesity, elevated blood pressure, tobacco and physical inactivity — explain an awful lot of the differences across states,” he said. “Why those causes are getting worse in some states and not getting worse in the other states, I think, deserves more investigation.”

For the study, researchers analyzed data from the Global Burden of Disease study, a research tool that quantifies health impacts across countries and within the US using various data sources such as the Centers for Disease Control and Prevention, the National Health and Nutrition Examination Surveys and state inpatient databases.

Since 1990, the Global Burden of Disease study has collected and analyzed health data, with the most recent data coming from 2016. The data capture premature death and disability from more than 300 diseases and injuries in 195 countries, by age and sex.

“It turned out that the trends in health — and in this case being measured by the chances of dying at different age groups — basically in all 50 states were improving in kids and adolescents and in people over age 55, but then in the ages between 20 and 55, you had the US going in two different directions,” Murray said.

“You had complete divergent trends in those middle age groups, and that’s sort of surprising because usually, people think whatever is driving health would affect everybody pretty much the same,” he said. “The fact that we get these very divergent trends by state and age, I think, is really quite unusual.”

Limitations of the study included that the accuracy of the findings depended on the availability of data by time period and by state. There may have been state-by-state differences in data collection. Also, while the study examined disparities between states, it did not examine disparities within states.

The study found several outcomes across state lines, including disparities in death rates, life expectancy, years of life lost due to premature death and years lived with disability. Here are six highlights that might change the way you think about America’s health.

Hawaii is on top for life expectancy at birth

For both 1990 and 2016, Hawaii was the state with the highest life expectancy at birth for its residents. Meanwhile, Mississippi had the lowest of all states for both years.

Mississippi was the state with the lowest at 73.1 years, followed by Louisiana at 73.3 and South Carolina at 73.7.

Even though it’s not a state, the District of Columbia was included in the data and had the lowest of all at 68.4.

They wrote that “if each state were a country, Hawaii would rank 20th worldwide (after Ireland) whereas Mississippi would rank 76th (tied with Kuwait).”

The researchers also found that Mississippi ranked as having the highest probability of death for people between the ages of 0 and 20 between 1990 and 2016.

The probability of dying young, by state

Probability of death for this age group was interpreted as the probability in a particular state that a child would die before his or her 20th birthday. Data for the District of Columbia were not included in this analysis.

Overall, the change in probability of death from birth to 20, between 1990 and 2016, declined in all states, the study showed. The states with the most pronounced declines were South Carolina, Georgia, Alaska and New York. On the other hand, Maine had the lowest decline of probability.

The researchers pointed out that the nationwide declines were associated with improvements in neonatal disorders; other noncommunicable diseases, including congenital; and injuries, with slight increases from mental and substance use disorders.

In 2016, Mississippi, Alabama and Louisiana ranked in descending order as having the highest probability of death in that age group.

In descending order, California, New Jersey and then Massachusetts ranked at the bottom of the list with the lowest probability of death for that year.

The researchers also measured probability of death for adults between the ages of 20 and 55, interpreted as dying before age 55.

The health of young adults, by state

Between 1990 and 2016, the largest reductions in probability of death were seen in New York and California, and the highest increases were in West Virginia and Oklahoma, the researchers found.

Decreases in the probability of death in the US might have been influenced by declines in the prevalence of HIV and AIDS across all states, as well as declines in road injuries and neoplasms or tumors, the researchers noted in the study.

Meanwhile, increases in the probability of death might have been influenced by a rise in the burden of drug use disorders, alcohol use disorders and chronic kidney disease, among other factors, the researchers noted.

“Mortality reversals in 21 states for adults ages 20 to 55 years are strongly linked to the burden of substance use disorders, cirrhosis, and self-harm,” the researchers wrote. “This study shows that the trends for some of these conditions differ considerably across different states.”

Cardiovascular disease is a concern in older adults

For adults 55 to 90, all states saw a considerable reduction in probabilities of death between 1990 and 2016.

The highest point decline between 1990 and 2016 was observed in California, which ranked as having the second-lowest probability of death for this age group in 2016. Hawaii had the lowest in 2016, and Florida had the third-lowest.

Hawaii was the only state in which the probability of death was less than 65% for adults 55 to 90, the study showed.

The study also explored causes of death for all ages nationwide.

“These two risk factors pose unique challenges in the United States given that unabated, they have the potential to change the health trajectory for individuals in many states. Levels of overweight and obesity increased during the study period,” they wrote.

Between 1990 and 2016, ischemic heart disease was the top cause of years of life lost in the US, and lung cancer ranked second, without budging, the study showed.

Additionally, “one of the things we do in the study is look at things that don’t so much kill you but lead to loss of good health, things like back pain, neck pain and things like depression,” Murray said.

Low-back pain and major depressive disorders remained the first and second causes of years lived with a disability in terms of rates between 1990 and 2016, the study showed. During that time, diabetes moved from eighth to third, and musculoskeletal disorders were in fourth.

A loss of health tied to a condition was measured in terms of disability in the study. “What’s interesting to me was the rise in low-back pain,” said Dr. Georges Benjamin, executive director of the American Public Health Association, who was not involved in the study.

“I don’t know whether that correlates in any way with the opioid epidemic, but low-back pain increased to be the third leading cause in 2016 in their study,” he said. “You wonder whether or not there is some correlation there, particularly with the rise in opioid use.”

“It doesn’t take a whole lot to notice that opioids and drugs more generally have shot up in the rankings and increased hugely over the period of this study,” Murray said.

“We did these analyses in other countries as well, and it’s very unusual to have opioids, or drugs more generally, as such a dominant cause of ill health,” he said.

How to fix America’s health problems

The findings in the study mirror what other research has shown when it comes to state-by-state disparities in health, Benjamin said.

“What’s interesting to me is that we still see that the states that tend to straddle the bottom of the rankings in all those kind of other studies are pretty much at the bottom of this study as well,” Benjamin said.

“Mississippi, Alabama, Georgia tend to still be at the bottom of the rankings — Alaska as well. Yet some of the states that tend to rank pretty high, like Hawaii, rank fairly well on just straight mortality and disability rankings,” he said.

“This demonstrates again that we have enormous disparities between states and how long you live.”

Strategies to deal with these state-by-state inequalities across the country should be threefold, the researchers wrote.

They stressed addressing modifiable risk factors such as diet and exercise; tobacco, alcohol and drug use; improving access to quality health care; and addressing the social determinants of health, such as the conditions in which people work and live.

Policy makers can use the new study and Global Burden of Disease results to reconsider the current national stance toward disease prevention, Koh and Parekh wrote in their editorial.

“Clinicians and policy makers can use these analyses and rankings to reexamine why so many individuals still experience preventable injury, disease, and death. Doing so could move the entire nation closer toward a United States of health,” they wrote.