NORTHAMPTON CO., N.C. - A man is accused of hiding in the walls of a building for hours while trying to escape law enforcement, according to the Northampton County Sheriff's Office.

Padgett, of Williamsburg, North Carolina, is accused of kidnapping, resisting arrest and probation violation, among other related charges.

News 3 spoke to Captain Patrick Jacobs, who helped bring the suspect into custody after a more than 20-hour standoff.

They said someone from Enviva Pellet Plant reported that a man possibly armed with a gun kidnapped a tractor trailer driver and forced him to drive from New Hanover County.

After authorities arrived on scene, they said they negotiated with Padgett for hours:

“After about 3 hours of standoff officers were able to deploy OC pepper spray in cab of the truck. Approximately 30 seconds later Kylen Padgett Jr. exited the cab of the truck through the driver side window with his hands held high appearing to give up to law enforcement. At that point Kylen Padgett Jr. turned his attention to escaping from law enforcement and climbed through the rafters of the building never setting feet on the ground. Throughout the day officers were able to hear and see Kylen Padgett Jr. within the rafters and steel beams of the building interior roof but were unable to negotiate with Padgett and unable to reach his position as he was wedged in between the building exterior wall and steel beams.” – Northampton Sheriff’s Office.

“He just climbed up in the ceiling area. He just climbed up, never even touching the ground. Negotiators tried to get him down,” said Captain Patrick Jacobs of the Northampton County Sheriff's Office.

Captain Jacobs said he and other law enforcement officials even got onto a construction machine lift at the plant in their attempts to reach the suspect.

“No matter how much we negotiated with him to come down, he would never respond to our commands. He would never even say a word to us,” said Captain Jacobs.

He said Padgett was allegedly on the move in the building.

“We saw him a couple times, but he was in areas in between the walls and the steel beams,” said Jacobs.

"Officers cut holes in the building deploying more OC Pepper Spray in an attempt to get Padgett to surrender to law enforcement. With no success officers then cut larger holes to use cameras and visually inspect the area Padgett was last seen wedged in wall of building. Law enforcement was no longer able to see Padgett upon late afternoon as he continued to evade capture. Late afternoon at approximately 4:00 pm Padgett was located within the building walls but he was able to successfully evade capture after a brief negotiation with law enforcement and refusing to comply with commands.

Law enforcement stayed on scene as darkness fell and at approximately 11:30 pm law enforcement was able to cut additional holes in the opposite west side of the building where more negotiations were used with Padgett. Law enforcement on scene were eventually able to apprehend Padgett as he gave up from exhaustion. Medical care was provided to Padgett by EMS and later Padgett was transported to the Northampton Co. Jail where he was processed and served outstanding warrants. He was placed in Northampton Co. Jail under a $326,000 secured bond.

“It was a long and exhausting day,” Jacobs said.

He praised the surrounding agencies that helped in their efforts.

Luckily, no one was hurt.

Padgett was served outstanding warrants for three counts of probation violation and one count of kidnapping, all out of New Hanover County.

An additional warrant was served for resisting, delaying and obstructing arrest. He is currently being held in the Northampton County Jail on a $326,000 secured bond. 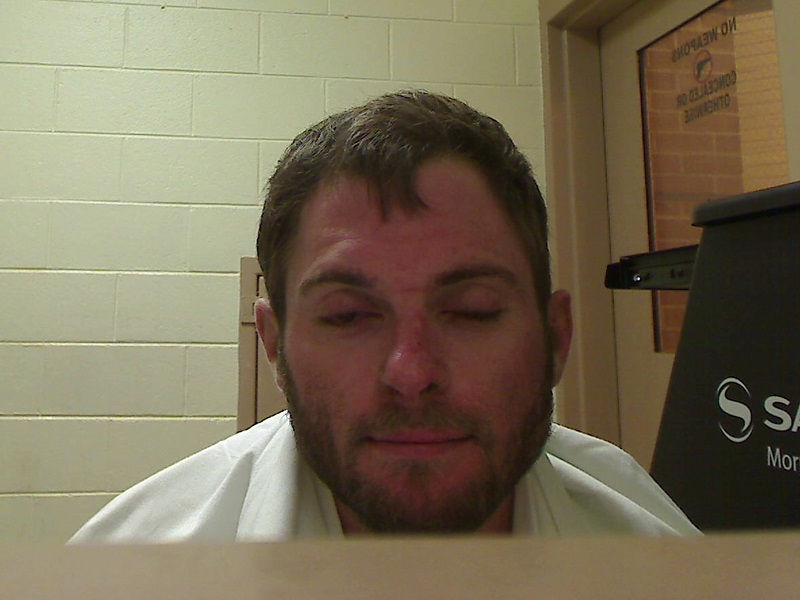