When the engine on the left wing broke in mid-flight, the pilots of Southwest Airlines Flight 1380 had to deal with a 737 that suddenly banked left on its own, well past any angle they would use.

The plane was pitched at an angle of more than 40 degrees for a few unnerving seconds before it leveled out and began an emergency descent, National Transportation Safety Board Chairman Robert Sumwalt told reporters Wednesday in Philadelphia.

Jennifer Riordan, has been identified as the victim in Tuesday’s deadly incident aboard Southwest Airlines Flight #1380.

The plane was ascending past 32,500 feet Tuesday morning and 144 passengers were settled in for a three-hour flight when a fan blade in the No. 1 engine apparently broke. A window next to a passenger in row 14 shattered and she was sucked into the hole while other passengers struggled to pull her back into the cabin.

The woman — identified as Jennifer Riordan of Albuquerque, New Mexico — died at a hospital. Seven other people had minor injuries.

Riordan died from blunt impact trauma of the head, neck and torso, a spokesman for the Philadelphia Department of Public Health said.

Sumwalt said investigators do not know how the window broke. There was no acrylic found in the plane, he added.

He said the plane rolled to 41 degrees, when pilots rarely go to 25 degrees.

Tammie Jo Shults’ name has not been officially released by Southwest, but her alma mater and the passengers have identified her as the pilot of the Southwest Airlines flight that made an emergency landing on April 17, 2018.
Credit: Kevin Garber/MidAmerica Nazarene University

Pilots: We were doing our jobs

Captain Tammie Jo Shults and First Officer Darren Ellisor shrugged off praise for their actions in landing the plane without further loss of life.

“We all feel we were simply doing our jobs,” Shults and Ellisor said in a statement posted on the airline’s social media pages. “Our hearts are heavy. On behalf of the entire crew, we appreciate the outpouring of support from the public and our coworkers as we all reflect on one family’s profound loss.”

The pilots said they would not be doing any media interviews.

Engine got a recent look-over

The flight was 20 minutes into its trip from New York to Dallas.

Suddenly, alarms blared in the cockpit as what passengers said sounded like an explosion boomed from the left side of the plane. Oxygen masks swiftly dropped from the ceiling.

What followed was a terrifying sequence of events that left Riordan dead, seven others injured and precipitated an emergency landing. The plane’s engine had undergone a visual inspection just two days before.

Southwest said in an email that on Sunday workers had looked at the inlet, exhaust, cowlings, and fairings.

“The next scheduled blade lube, and the first ultrasonic inspection on the No. 1 engine of aircraft 772, was scheduled to be accomplished in December of this year,” Southwest said. 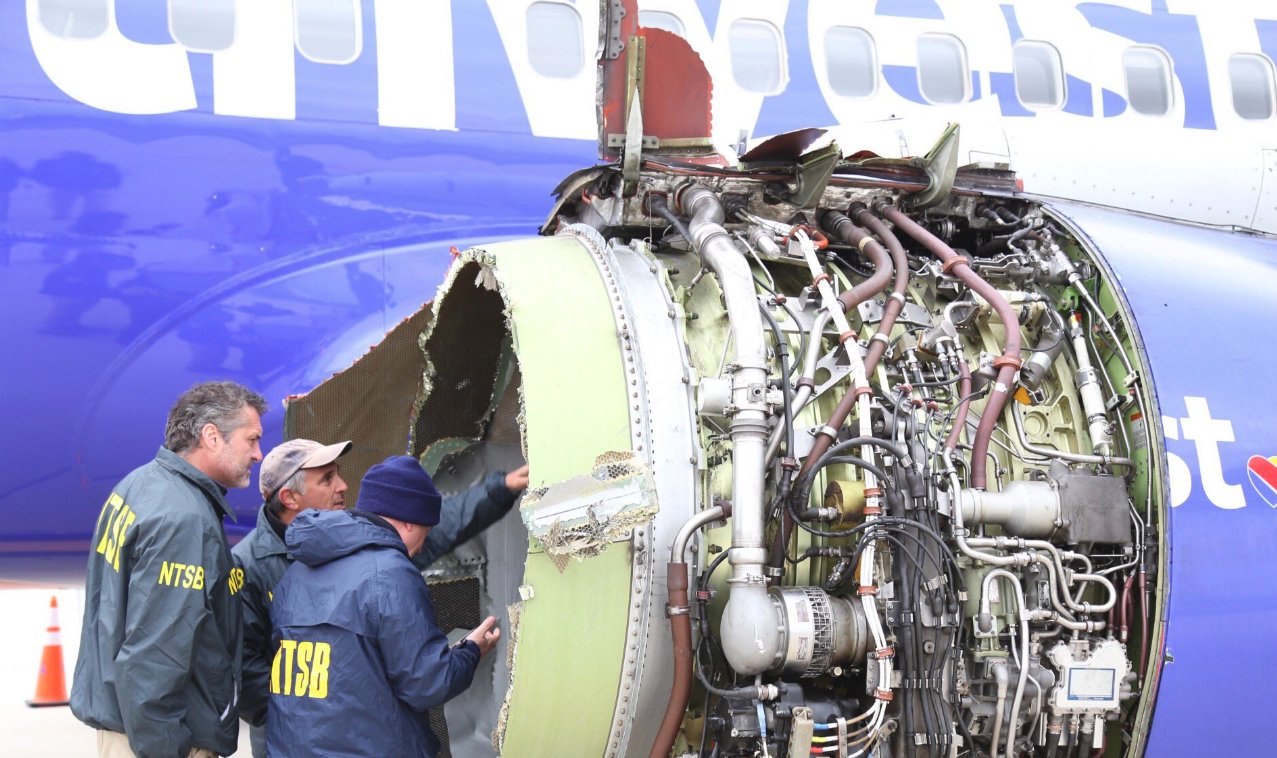 ‘Everybody was going crazy’

Southwest Airlines Flight 1380 took off from LaGuardia Airport at 10:27 a.m. and landed in Philadelphia about 11:23 a.m.

The Boeing 737 was headed to Dallas with 144 passengers and five crew members. For about 20 minutes, everything seemed calm. Then “a loud boom” suddenly jolted the plane, passenger Marty Martinez said.

“About five seconds later, all the oxygen masks deployed,” he said. “I immediately knew something was wrong. It just didn’t register what could have been.”

Something in the engine broke apart midair and burst through the window, passengers said. A woman was sucked toward the hole where the window once had been as passengers struggled to pull her back in.

“Everybody was going crazy, and yelling and screaming,” Martinez said. “As the plane is going down, I am literally purchasing internet just so I can get some kind of communication to the outside world.”

As the plane quickly descended and passengers continued scrambling to pull the woman away from the window, other passengers stuffed clothes and jackets into the hole, said Martinez, who was sitting two rows away from the woman. Those items got sucked out of the plane, too, he said.

“We could feel the air from the outside coming in, and then we had smoke kind of coming in the window,” Martinez said.

In the chaos, it was hard to hear anyone. Flight tracking website Flightradar24 estimated the plane descended from 31,684 feet to 10,000 feet in about five minutes.

“It was very loud, so announcements from the pilot or any other crew would not have been heard,” passenger Amy Serafini said.

“Everyone kind of descended on where this hole was,” he said.

He thought about his family and whether he’d see them again. The thoughts were terrifying.

After trying to pull the woman back for several minutes, a man in a cowboy hat and a second man finally got her into her seat, Serafini said.

A nurse aboard the flight performed CPR.

“We started CPR on the lady, which we continued for about 20 minutes. We were still doing CPR when the plane landed,” Peggy Williams said. “We made every effort that we could possibly make to save this woman’s life.”

Martinez said it was a rough landing, and he wasn’t sure if the plane was going to crash. The jet could have been landing on a freeway for all he knew, he said.

“I didn’t know if we were going to be running into a building. I didn’t know what state the plane or even the pilot was in, if we were in condition to land,” he said. “Finally when we … came to a halt, of course, the entire crowd was (in) tears and people crying and we were just thankful to be alive.”

Before the plane landed, the pilot asked the air traffic controller to send medics to meet it on the tarmac.

“Injured passengers OK, and is your airplane physically on fire?” the air traffic controller asked.

“No, it’s not on fire, but part of it is missing. They said there’s a hole and that someone went out,” the pilot responded.

“Um, I’m sorry, you said there was a hole and somebody went out? Southwest 1380, it doesn’t matter we will work it out there,” the air traffic controller said.

The controller asked other planes to prepare for the airport to be shut down.

The National Transportation Safety Board said a preliminary look at the engine shows one of its 24 fan blades was missing.

There was evidence of metal fatigue where the blade attached to a hub, Sumwalt said.

“In aviation, there should be inspection techniques and procedures in place to detect something like that. What we want to find out is why was this not detected ahead of time,” Sumwalt told CNN on Wednesday.

Metal fatigue is not something that could be seen at a glance, and because it was internal, even a careful maintenance inspection from outside the engine may have missed it, he said. The fan blade spins at several thousand revolutions per minute, so when it was “liberated,” Sumwalt said, it basically broke into shrapnel.

It was not an explosion, he said, likening it more to a car’s combustion engine throwing a rod, which bangs around the engine.

“More than likely, when the engine fan blade separated, it caused the cowling to separate and end up in this small town northwest of the airport,” he said.

The cowling was found about 70 miles from where the plane landed. The FBI has asked anyone who find parts of the aircraft to contact the agency’s Allentown, Pennsylvania, office. On Wednesday, Pennsylvania State Police secured a hunk of debris found 8 miles north of Reading, near Blue Marsh Lake.

The flight data recorder and the cockpit voice recorder have been sent to Washington, Sumwalt said.

Sumwalt told CNN that Kelly assured him Tuesday night that Southwest will be conducting “an aggressive ultrasonic inspection campaign for their entire fleet.”

The engine had been used for 40,000 cycles (takeoffs and landings) and had been overhauled 10,700 flights ago, Southwest said.

The Federal Aviation Administration said Wednesday night it will issue a directive in the next two weeks requiring inspections of certain CFM56-7B engines. The directive will require an ultrasonic inspection of fan blades when they reach a fixed number of cycles.

Passenger identified as 43-year-old mother of 2

Riordan, 43, worked for Wells Fargo in Albuquerque, New Mexico, according to the bank. Southwest said hers was the first in-flight death in company history.

“This is a sad day and our hearts go out to the family and the loved ones of the deceased customer,” Kelly said. “We will do all that we can to support them during this very difficult time.”

In a statement, Wells Fargo called her “a well-known leader who was loved and respected.”

She is survived by two children and her husband, Michael Riordan, who was once the chief operating officer for the city of Albuquerque, CNN affiliate KOAT reported.

Her family said in a statement that her impact on those she touched “can never be fully measured.”

“She is the bedrock of our family. She and Mike wrote a love story unlike any other. Her beauty and love is evident through her children,” the statement said. “In her memory, please remember to always be kind, loving, caring and sharing.”

Southwest pilot praised by passengers for ‘nerves of steel’ during emergency