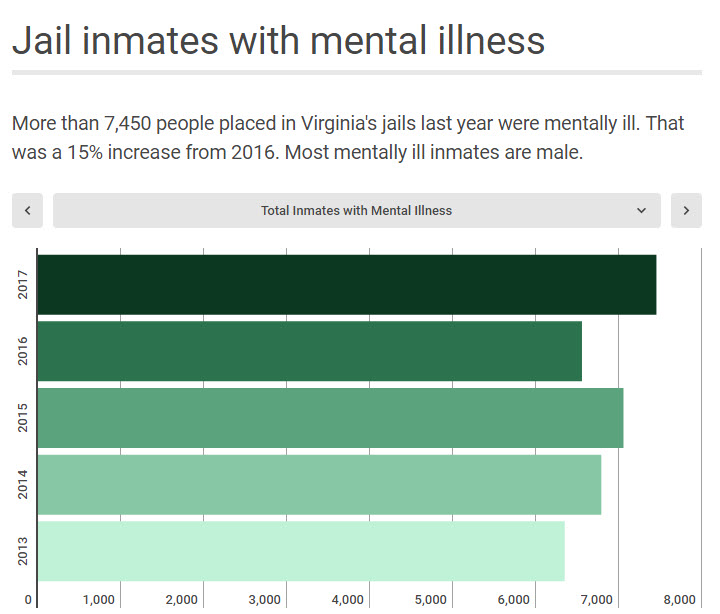 RICHMOND – Arrested for taking $5 in snacks from a convenience store, Jamycheal Mitchell was placed in a cell in the Hampton Roads Regional Jail in Portsmouth. Authorities planned to send Mitchell, who suffered from schizophrenia, to a mental hospital. But that never happened.

“I had to ask again: ‘You sure this is my cousin?’ ” Jenobia Meads told reporters after seeing Mitchell’s body at the funeral home. “It looked like he was 67 years old.”

Mitchell’s death underscored the prevalence of people with mental illnesses in Virginia’s jails. More than one in six inmates is mentally ill, according to a 2017 study by state officials. Despite years of discussion and attempts at action, lasting reforms have proved difficult to achieve.

“As a mental health reformer, I’ve told people for a long time it’s like eating an elephant,” said Sen. R. Creigh Deeds, D-Bath. “You take a bite and you feel full, but then you look at what’s ahead of you, the work ahead of you, and you realize that you haven’t really done much.”

A senator motivated by tragedy

In 2013, Deeds was stabbed multiple times at his home in Bath County by his 24-year-old son, Gus, who then committed suicide. Gus Deeds had been diagnosed with bipolar disorder, but mental health care system officials released him after they could not find an open bed in the state psychiatric system during the six-hour window allotted by law at the time.

The tragedy motivated Deeds, a member of the state Senate for 17 years, to become an advocate for mental health reform. He heads the Joint Subcommittee to Study Mental Health Services in the 21st Century.

The subcommittee expects to issue a report on its findings by the end of 2019. In the meantime, members of the panel have endorsed several budgetary and legislative proposals on such issues as alternatives to incarceration, crisis and emergency services, and housing.

“The joint subcommittee is at a critical point in our work, as we only have about a year and a half of life left,” Deeds said. “We cannot afford to lose one inch of ground or one moment of time.”

Deeds said he looks forward to working with Melton to achieve the subcommittee’s goals.

The move will be closely watched in the state, which has struggled to improve mental health services. Among the challenges has been the loss of thousands of psychiatric beds since the 1960s, when mental health advocates pushed for community-based programs and the deinstitutionalization of patients.

Community-based treatment is cost-efficient in managing mental health problems and establishes a level of care that can address problems before they become emergencies. But psychiatric hospitals and other residential facilities are necessary in the event of a mental health crisis like the one experienced by Gus Deeds.

According to a 2017 survey by the nonprofit Treatment Advocacy Center, Virginia has about 1,500 psychiatric beds – not nearly enough to meet the needs of people with severe mental illnesses.

When left untreated, severe mental illness may result in behavior that can put the person in the custody of law enforcement – placing the burden of psychiatric treatment on correctional facilities.

“People with mental illness are sometimes caught up in situations where paranoia, or whatever drives them to do something that somebody may consider a criminal act, and the result is they wind up in jail,” Deeds said. “There’s probably a better way for us to respond to that.”

Individuals with psychiatric diseases like schizophrenia and bipolar disorder are 10 times more likely to be in a jail or correctional facility than in a hospital bed, according to research by the Treatment Advocacy Center. About 4 percent of U.S. adults have a serious mental illness, while 20 percent of inmates are diagnosed with a severe mental disorder – leading some to characterize prisons and jails as America’s “new asylums.“

The Hampton Roads Regional Jail, where Mitchell was held at the time of his death, has become an unofficial mental health institution for Newport News, Hampton, Norfolk, Portsmouth and Chesapeake. Nearly half of the jail’s 1,100 inmates are diagnosed as mentally ill, according to a study by the Virginia Department of Corrections and state Compensation Board.

The Compensation Board works with sheriffs and other constitutional officers. The General Assembly has directed the board to issue an annual report on the number of jail inmates with mental illness. The board’s 2017 report put the number at more than 7,450 – almost 18 percent of the statewide jail population.

The punitive approach of correctional facilities creates an environment ill-suited for the rehabilitation of mental illness, critics say. The Compensation Board reported that 1,335 jail inmates diagnosed with mental illnesses were placed in solitary confinement last year.

Another death, this one in Fairfax County

Jamycheal Mitchell wasn’t the only mentally ill person to die in a Virginia jail. Natasha McKenna, who also suffered from schizophrenia, died in the Fairfax County Jail in 2015. A lawsuit filed in 2016 against the Fairfax County Sheriff’s Office alleges that insufficient training factored into McKenna’s death.

McKenna, 37, died after being repeatedly shocked with a stun gun by correctional officers trying to move her to another cell. Attorney Harvey Volzer, who is representing McKenna’s mother, declined to comment on the case. However, when Fairfax County Commonwealth’s Attorney Ray Morrogh investigated the case in 2015, he determined that no crime was committed and that no charges would be filed against the officers.

The Treatment Advocacy Center has found that individuals diagnosed with severe mental disorders are more likely than other offenders to end up back in jail.

“We need to make sure we have discharge plans, that we have a way for them to kind of parachute into the community and seek and receive treatment services,” Deeds said. “We need to be looking at the whole person and the way we can treat them.”

Addressing that need, the 2016 General Assembly awarded six regional and local jails $3.5 million to establish pilot programs that provide mental health services to inmates while incarcerated and after their release.

In 2014, the General Assembly passed a bill proposed by Deeds that extended the time limit on emergency custody orders, established a registry of available psychiatric beds in public and private hospitals, and designated state hospitals to serve as facilities of last resort. The legislation sought to ensure that beds would be available for citizens, including inmates, who experience a mental health crisis.

Deeds has asked the Institute of Law, Psychiatry and Public Policy at the University of Virginia to study alternative solutions for people having severe mental health issues.

Having options is crucial because the state hospital system is overcrowded, said Rhonda Thissen, executive director of the National Alliance on Mental Illness in Virginia. “If we can find alternatives for people that are in the community, that are not in jail, it would make it easier for people in jail to get a bed in the state hospital.”

Deeds said possible solutions being examined by his subcommittee include:

“All of that is pretty ambitious,” Deeds said. “We need to be looking at the whole person and the way we can treat them.”

By Yasmine Jumaa and Irena Schunn