Dog stolen from Virginia Beach couple’s home has been found

VIRGINIA BEACH, Va. - A dog stolen from a Virginia Beach couple Tuesday has been found!

"I drop to my knees and I started crying," said Leah Bullock, when she was reunited with her dog Friday morning.

The couple, both Navy Sailors, told News 3 someone kicked in their apartment door and stole their French bulldog, Denver.

It happened at the Choice of Holland Windsor apartment complex off Holland Road.

"Words can't really explain how happy I am to get one of our best friends back. We just want to thank everybody that helped us. Everyone that shared our story helped contributed to find Denver. We don't even know how to say thank you," said Joseph Schuessel.

Bullock told us how the dog has helped with depression and anxiety. She's pregnant and expecting the couple's first child in June.

“He just brightens up your day. You could have a bad day and you come home to him and everything changes,” said Bullock.

Her boyfriend,  showed us where the door was kicked into their apartment.

“Whoever took him: know you basically took part of our life away,” said Schuessel, “It's like a little piece has just been ripped from you.”

Schuessel said Denver and his crate were the only things missing from the apartment. Denver has a brother named Jax who was also home when the break-in took place.  Jax is a one-year-old bulldog.

On Friday, Virginia Beach Police confirmed to News 3 that the dog was located running in the street and was picked up and taken to a shelter.

The couple tells News 3 they found him posted on a website for a Chesapeake animal shelter. They arrived at the shelter on Friday morning to pick him up.

"I can't even describe how I'm feeling. I'm so excited. I'm so happy. My heart is full again. I got my best friend back. My family is complete," said Bullock. 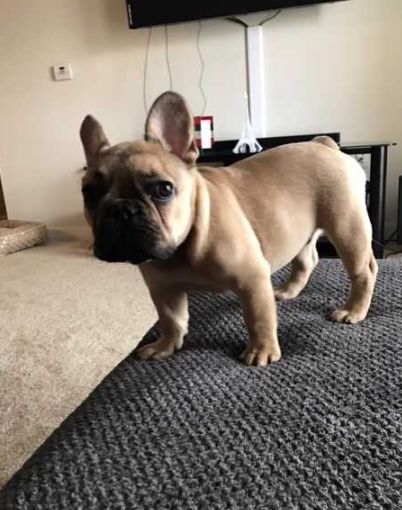