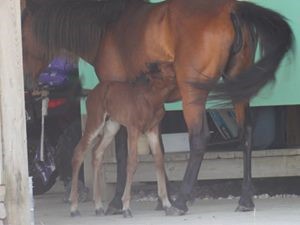 COROLLA, N.C. – Mother’s Day was special for lots of moms out there but the day was extra special for a horse on the Outer Banks!

Corolla Wild Life Horse Fund announced that one of the Spanish Mustangs had a baby on the holiday.

They have decided to name the colt Castano II which the group said means “brown, chestnut, auburn.” The wild horse fund said there was previously a Corolla stallion named Castano, hence the “II” on this cutie’s name.

Follow the Corolla Wild Horse Fund on Facebook for updates on their work with the wild horses!