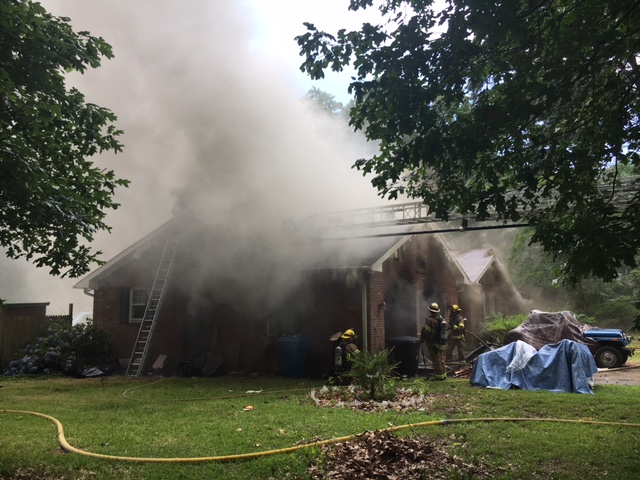 When firefighters arrived at the home in the 1100 block of Crabbers Cove Lane, heavy smoke could be seen coming from the roof. No one was inside at the time of the incident.

Firefighters attacked the fire from the outside and entered the home to difficult conditions. The thick smoke made visibility extremely limited on top of the intense heat.

Crews had a hard time trying to access the fire due to numerous obstacles inside the home. Accessing the home from the outside was also difficult due to the narrow road leading to the home, making it hard to set up heavy equipment needed. Damaged flooring also made it difficult for them to move around once inside.

It took more than an hour to bring the fire under control. Firefighters remained at the scene long after the fire was extinguished to due heavy damage to the home.

The hot weather also made firefighters’ job difficult, and extra efforts were made to make sure they stayed hydrated. Medics were also at the scene to monitor firefighters’ vital signs and to check on the well-being of firefighters coming out of the building.

There are no injuries reported.

The cause of the fire is unknown at this time.