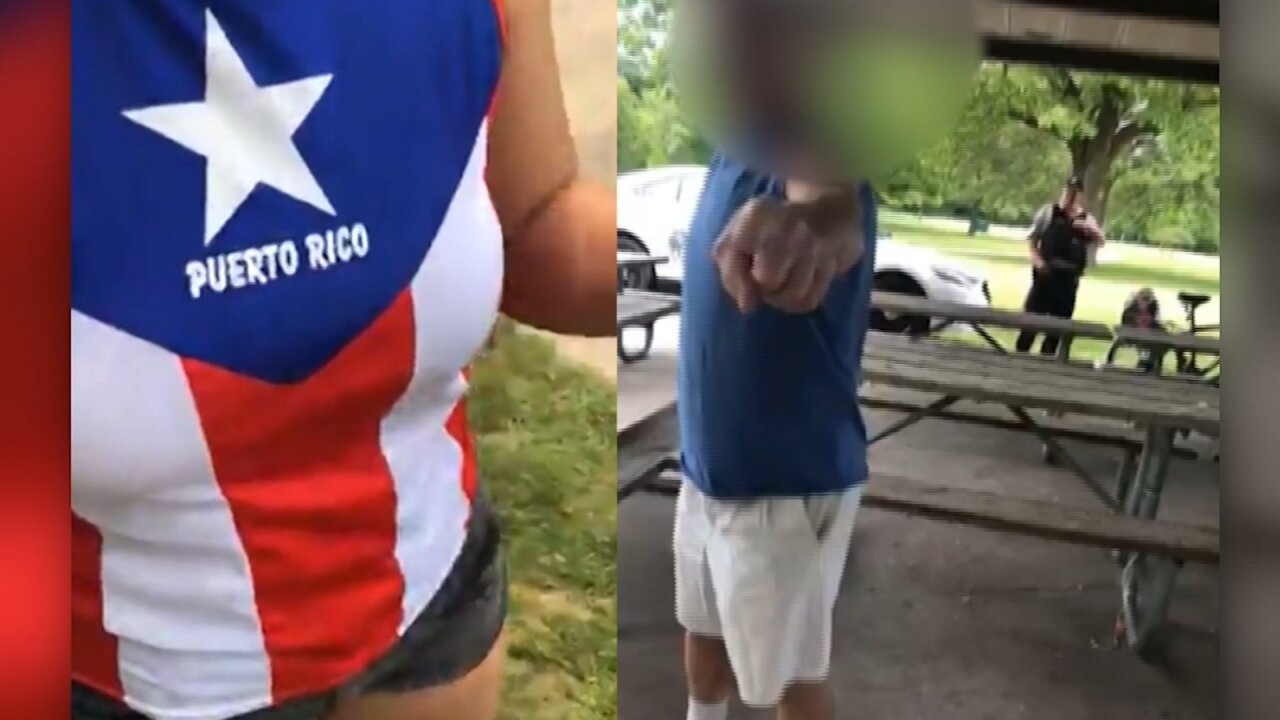 An Illinois police officer has resigned after being criticized for not intervening as a man harassed a woman for wearing a Puerto Rican flag shirt.

An Illinois police officer has resigned after being criticized for not intervening as a man harassed a woman for wearing a Puerto Rican flag shirt.

In the incident caught on video at a northwestern Chicago park last month, the woman pleads for help as a man harasses her, saying her shirt is un-American. The officer initially appears to ignore the pleas.

Mia Irizarry says she was celebrating her 24th birthday at Caldwell Woods park when the man approached her and asked her why she was wearing the sleeveless Puerto Rico flag shirt. It also had “Puerto Rico” written below the neckline.

Irizarry recorded the encounter on her phone, saying she felt threatened, and posted the video to Facebook.

On Monday, Forest Preserves of Cook County, which administers the park, tweeted that it was aware of the June 14 incident and video, and that it had launched an investigation.

An attorney for the Illinois Fraternal Order of Police Labor Council, which is representing Conner, said that the video “does not look good,” but cautioned that the video may not tell the whole story.

“Given his decision to resign, he won’t be offering any additional comment on what might have happened during this situation,” she said. “He’s very distraught and not happy about having to leave employment much sooner than he intended, but because of the strong reaction from the public and political figures, he thought it would be unrealistic to stay as an officer.”

Pope said Conner feels “he wasn’t given a fair shake,” and that “he was very remorseful.” But Conner resigned before investigators could ask him what happened during a disciplinary hearing, Pope said at a news conference Thursday.

“(Conner’s) personnel file will reflect that this officer did not resign in good standing, with a note indicating that he left the district with discipline pending,” the park agency’s general superintendent, Arnold Randall, said.

Timothy G. Trybus, the man police say harassed Irizarry, was arrested on the day of the incident on charges of assault and disorderly conduct, according to a police report. The report alleges he was intoxicated.

Cook County Commissioner Jesús “Chuy” García had called for such charges against Trybus a day earlier.

“A charge for simple assault or disorderly conduct is not sufficient,” García said. “We cannot allow that ugly rhetoric to be the norm in Cook County.”

Randall, the forest preserves superintendent, said his agency has apologized to Irizarry and refunded the money she had paid for a permit to gather at a picnic table area on the day of the incident.

He said his agency would re-examine the diversity training for its officers and other employees.

“It’s up to each and every one of us to present a better model to demonstrate with our own actions how to treat each other with more respect,” he told reporters Thursday. “We might start with the fine example presented by Mia Irizarry and her family, who handled this ugly incident with great composure, never stooping to the level of the man who attacked her.”

In the footage, a man can be seen approaching Irizarry saying: “You should not be wearing that in the United States of America.” He gets closer to her and asks “Are you a citizen? Are you a United States citizen?”

Irizarry says Puerto Rico is part of the United States and the man approaches her multiple times. She asks a park police officer to help, saying, “I am renting this area and he’s harassing me about the shirt that I’m wearing.”

Later she says: “Officer, I feel entirely uncomfortable, can you remove … please officer” as the officer is seen walking away from her.

Then she says: “Officer, I’m renting, I paid for a permit for this area. I do not feel comfortable with him here, is there anything you can do?”

The officer can then be seen talking to the man who gesticulates back and tells him to “shut the f*** up.”

More police arrive and Irizarry says she still doesn’t feel safe. The man resumes his abuse, saying: “You’re not American, if you were American you wouldn’t wear that. You know that right?”

A female officer asks to see his ID and can be heard telling him that he’s intoxicated, to which he replies, “Well that’s your judgment.” She explains that Irizarry has a permit and she warns him that he could be arrested “for not being compliant.”

“You don’t come here harassing people,” the officer continues. “People have just as much right to be here as you and when you’re drunk, you don’t belong here.”

The female officer then speaks with Irizarry, who gives her version of the incident and the officer explains that they were called to the area after a report that a man was choking a woman.

Eventually the first officer on the scene takes notes of Irizarry’s account of the incident and says that he was at the scene due to the separate incident, noting that she was not being attacked though acknowledging she felt threatened.

Irizarry can be heard explaining to the officer that the incident began when they had asked the group the man was in if they could move as they had a permit for the area. She said the group politely complied but her Puerto Rico shirt appeared to act as a trigger to the man.

Puerto Rico is a US commonwealth with its own constitution, rather than a state. Puerto Rican residents have been American citizens since 1917 and have the right to vote in US presidential primaries, but not in presidential elections.