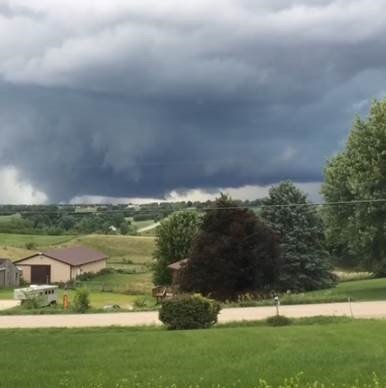 Several tornadoes tore through Iowa on Thursday, including one that sent seven people to the hospital, officials said.

In the southeastern part of the state, in Pella, a company that manufactures industrial and agricultural equipment reported “major damage.”

The Vermeer Corporation said that the severe weather hit multiple facilities at 4 p.m., when about 400 dealers and customers were on site as part of a 70th anniversary event.

Vermeer CEO Jason Andringa said those sent to the hospital had minor injuries; they were later released. Others were treated at the scene. Two plants had significant damage, he told reporters.

Another tornado hit the city of Marshalltown, the agency said.

At least 10 people were treated at UnityPoint Health in Marshalltown after a tornado struck the area, about an hour northeast of Des Moines.

None of the patients are in critical condition, hospital spokeswoman Laura Rainey said.

Julie Owen from Des Moines was visiting her daughter in Marshalltown when the tornado hit.

She was not in the area where the tornado hit, but went into town to help pick up her granddaughters from day camp.

“It was bad. I’ve seen a lot of tornado stuff (in the past),” she said. “It’s not like the whole town is destroyed, but downtown, a city of this size, it was something else.”

Photos taken by Billie Blocker Rice show damage to buildings on the north side of town.

Trees have crashed down into roads, house are missing many shingles, a large industrial building is missing sections of a wall and debris is littered over vehicles in the parking lot.

“Everyone is advised to stay away from downtown Marshalltown until further notice,” she said in a statement. “We also ask that people stay off cell lines unless necessary, to allow for emergency phone traffic.”

About 27,000 people live in the town. Many of them were without power; Alliant Energy reported 6,800 homes and businesses were without electricity.

According to CNN affiliate WOI, another tornado damaged houses in Bondurant, about 10 miles from Des Moines.

The storm knocked out power and telephone service at city hall, officials said.