Suspect and police K9 killed in Sussex Co. shootout after I-95 chase

SUSSEX COUNTY, Va. - A suspect and Virginia State Police K9 are dead after a police pursuit on Interstate 95.

The chase ended in a crash and gunfire Wednesday morning.

Campbell says Poole was wanted for the murder of 28-year-old Tyekqua Nesbitt who was shot to death in front of her two children in New Haven, Connecticut on May 31.

Poole was also wanted in New Haven for the first-degree shooting assault of his wife on May 7.

A $30,000 reward was offered by the U.S. Marshal’s Violent Fugitive Task Force and States Attorney’s office, to anyone who had information on Poole.

Wednesday's incident started around 8:15 a.m. when a State Police Trooper identified a vehicle that had been reported stolen out of Connecticut, according to state police.

Shots were fired from the suspect's vehicle as officers with the State Police Drug Interdiction Task Force initiated a traffic stop on I-95 south of Sussex County, according to Virginia State Police spokesperson Sgt. Michelle Anaya.

One of the suspect's bullets struck a state police narcotics detection canine riding in the back-seat compartment. The canine did not survive his injuries.

The suspect's vehicle eventually exited I-95 north at Exit 24.

Once off the interstate, more shots were fired from the suspect's vehicle toward police, Anaya said.

The situation ended with a crash near the intersection of Bell Road and Loco School Road in Yale, Virginia.

Once the vehicle was stopped, Virginia State Police said troopers returned fire with the male suspect, who was pronounced dead at the scene.

A female passenger in the suspect vehicle was transported to the hospital with non-life-threatening injuries. She has since been released.

No Virginia State Police troopers were hurt in the incident. 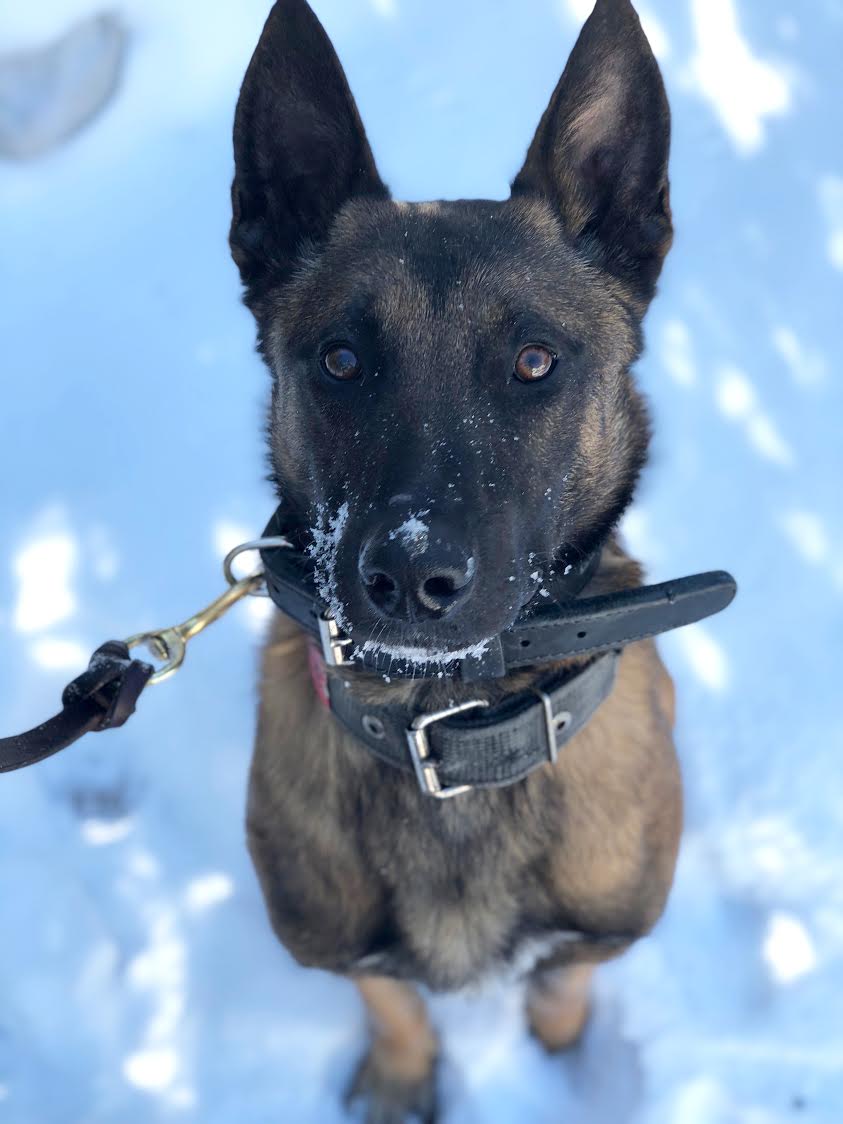 The fallen K9, identified as Vader, was been given full honors, including lights and motorcycles, and escorted back to Richmond. The 2-year-old Belgian Malinois graduated from Virginia State Police Narcotics Detection Training in December 2017.

On Thursday, State Police said they're currently working on arrangements for a memorial service to honor Vader. A VSP blue and gray K9 vehicle has been placed in front of the VSP Administrative Headquarters on Midlothian Turnpike as a memorial to the K9 officer.

"Our canine program is essential in so much of what we do as a Department to achieve our public safety mission," said Colonel Gary T. Settle, Virginia State Police Superintendent. "We are all deeply saddened by the loss of Vader and are forever grateful for his sacrifice and selfless service to the state police and the Commonwealth. For our canine handlers, their dogs are more than just a partner on the job. They are their protectors, their constant companion and confidant on the road. Vader was family."

Three Virginia State Police troopers have been placed on administrative leave, as is standard after all officer-involved shooting incidents.

Along Bells Road in Sussex, people are used to seeing trees and mailboxes not police pursuits that end in gunfire.

As the police pursuit exited I-95 neighbor Dwayne Tomlin hear sirens and saw the vehicles heading down Bell Road.

"I heard a gunshot," said Tomlin.

"That had spun out and run into the ditch and was turned over and was smoking when I got there," said Tomlin, referencing to a vehicle involved in the crash.

David Hornberger was walking down his driveway; when he saw the suspect vehicle speeding down Bell Road.

“Then less than a second or two behind it, there come police officer after police officer. I mean they came out the wood work,” said Hornberger.

“I’ve never seen such a barrage of police officers in my life,” said Tameisha Reed.