Scores of people in New Bern, North Carolina, have been rescued from the water

As Tropical Storm Florence unleashes a deluge upon North Carolina, the city of New Bern has found itself inundated with floodwater, forcing hundreds of residents to call for help.

After about 200 people were rescued overnight, 150 were left waiting for help Friday morning, according to a city spokeswoman.

By Friday afternoon, the number of New Bern residents who still hadn’t been rescued had dropped to about 40, according to Mayor Dana Outlaw.

According to CNN meteorologists, as of Friday evening, New Bern had already seen more than 10 feet of storm surge and likely more than 10 inches of rain.

New Bern, home to approximately 30,000 people, sits about 37 miles northeast of Jacksonville, North Carolina, on the banks of the Neuse River. Thursday, a CNN team in the area watched as the water spilled over the edge of the river and flooded Union Point Park in a matter of hours.

New Bern resident Peggy Perry told CNN she and three relatives were trapped inside her home.

“In a matter of seconds, my house was flooded up to the waist, and now it is to the chest,” she said. “We are stuck in the attic.”

“We have been up here for like three or four hours,” Perry added, “and there’s no windows up here in the attic, so I put a light in the window so they would know someone’s here.”

Roberts said rescuers were facing very challenging conditions, but assured residents help was on the way.

“We tell them to remain calm, not to panic, we will rescue them,” Roberts said. “Again, we’re having to be strategic about it.” 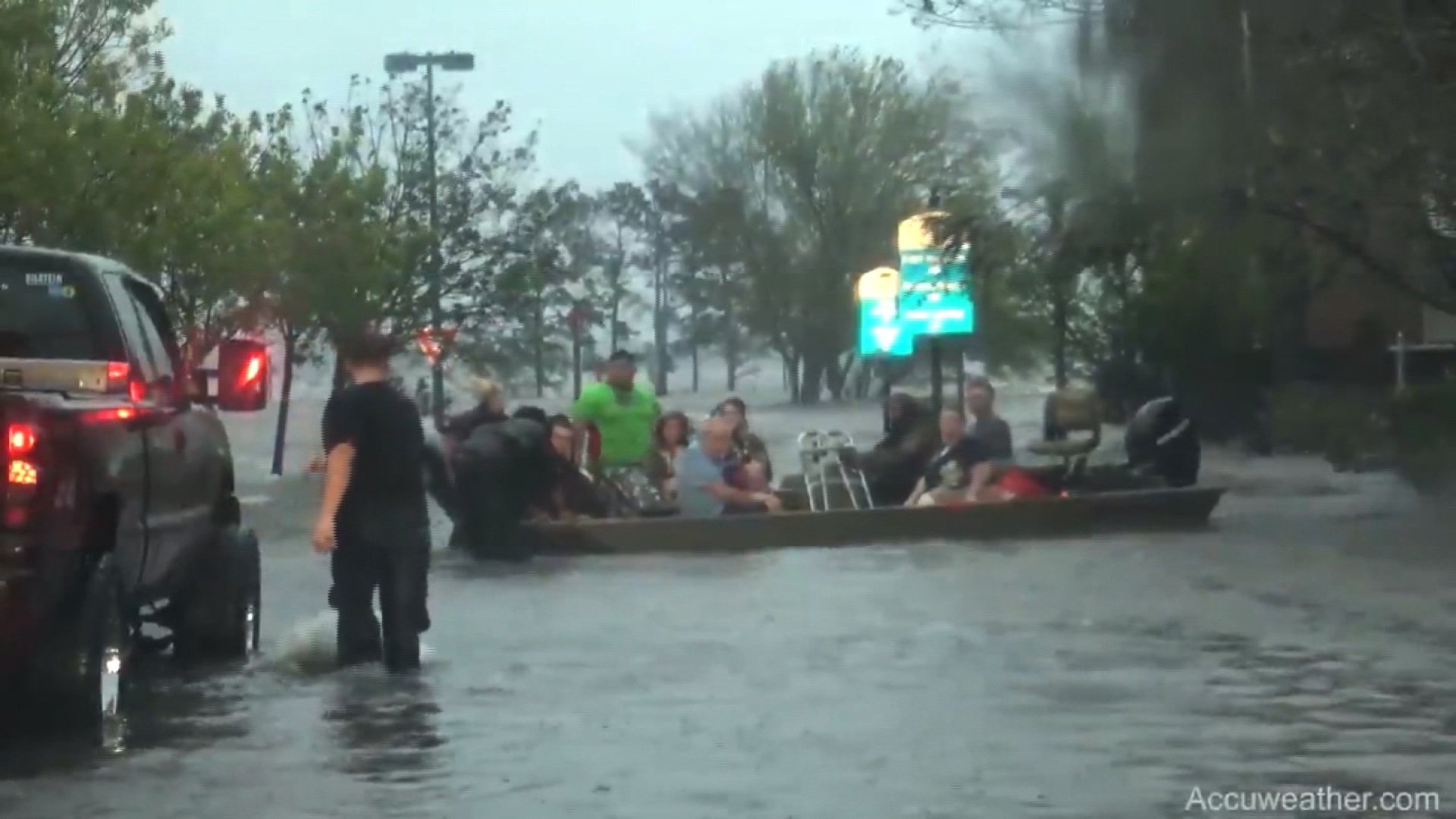 The storm surge had decreased to about 8 feet later Friday morning, Roberts said, but that was mostly attributed to changes in the Neuse River’s tide.

“And when the tide comes back up around noon, we will be inundated with additional storm surge,” she said. “So we really have a new hustle this morning to get the rest of those 150 people out.”

According to Roberts, citizen volunteers with their own boats have offered to help the city coordinate rescues.

“We are not turning away that help,” she said.

Among those volunteers was the Cajun Navy, a volunteer rescue organization formed in the aftermath of Hurricane Katrina.

Organizer Clyde Cain told CNN the Cajun Navy was staged in New Bern and had received more than 500 calls for assistance.

Jason Weinmann, a 47-year-old retired Marine, also joined the rescue effort. He brought with him a military transport vehicle that he bought at a government auction 10 years ago.

“That’s why I got this thing, to use in times like this,” he told CNN’s Ed Lavandera.

Weinmann plucked 10 people out of flooded neighborhoods and brought them to a shelter in New Bern.

One of the people who needed help was 22-year-old Felix Fisher, who lives in a house with his mother and grandmother. As the storm approached, Fisher said, extended family decided to stay back so no one would be left behind.

Jennifer Morales, 20, her husband and their young son were also evacuated from their home. Riding in the back of Weinmann’s truck, she told CNN, “We didn’t know where to go.”

Water began rising in their home Thursday night, Morales said. And because of the demand on first responders and rescuers, they didn’t make it out for 12 hours.

Another crew, the Maryland Swift Water Rescue team, assisted with between 35 and 40 rescues from rising waters since arriving in downtown New Bern at 4 p.m. Thursday, according to member Mitchell Rusland.

Amber Parker, a spokeswoman for Craven County, where New Bern is located, told CNN early Friday the county had already logged more than 100 service calls from residents trapped on their roofs or in their cars.

The county had been conducting water rescues since Thursday, Parker said.

Employees at CNN affiliate WCTI had to flee their newsroom in New Bern on Thursday night after floodwater began streaming into the building.

“The building has been evacuated,” meteorologist Donnie Cox told viewers on air. “Just so that you know, we are staying here to keep you up to date.”

WCTI anchor Valentina Wilson began streaming on Facebook Live to tell viewers the employees were on their way to a safe location, while Cox continued working.

“If you’re at home, please just heed the warnings, people,” Wilson pleaded with viewers. “Just stay indoors, be safe, continue to pray and somehow we will all get through this together.”

Ariel Heath broadcast on Facebook Live to share footage of the situation in the small town of James City, just south of New Bern.

She pointed her phone out the window on the second floor of a building showing the property covered in water, littered by downed trees. A short distance away an overturned trailer could be seen. Car alarms blared in the distance throughout the video.

Oil had mixed with the floodwater, Heath said, and she described an overwhelming scent of gasoline as she ventured downstairs.

The odor soon became so strong it forced her back upstairs to continue filming.

“We lost all of our cars last night,” Heath told her viewers, “because the water was above the headlights, even on our SUVs.”

“Last night there was water over the dead bolt locks on the doors,” Heath told CNN. “The water has gone down quite a bit.”

“We know water was inside houses, cars had water over the headlights,” she continued. “It’s just bad — winds are still really high.”