This fall, more than a million kids, teens and young men will line up on the hash marks for another season of football. Millions more will watch, either as rabid fans or, increasingly, as concerned parents and loved ones.

It isn’t just the looming threat of broken bodies or chronic brain injuries that gives people pause when it comes to the risks associated with football. Almost every year, a few young people lose their lives on the field or as an indirect result of their actions on it.

In June, University of Maryland offensive lineman Jordan McNair died as a result of heatstroke he developed during a practice in May. His death devastated the university’s football community, and inquiries into the school’s handling of his treatment are ongoing.

It’s a rare but reliable tragedy: rare in that the number of deaths at any level of organized football is a tiny fraction of the overall number of participants; reliable because the deaths happen for specific and recurring reasons, and program organizers across the board have to constantly consider ways to make this inherently brutal sport less so. 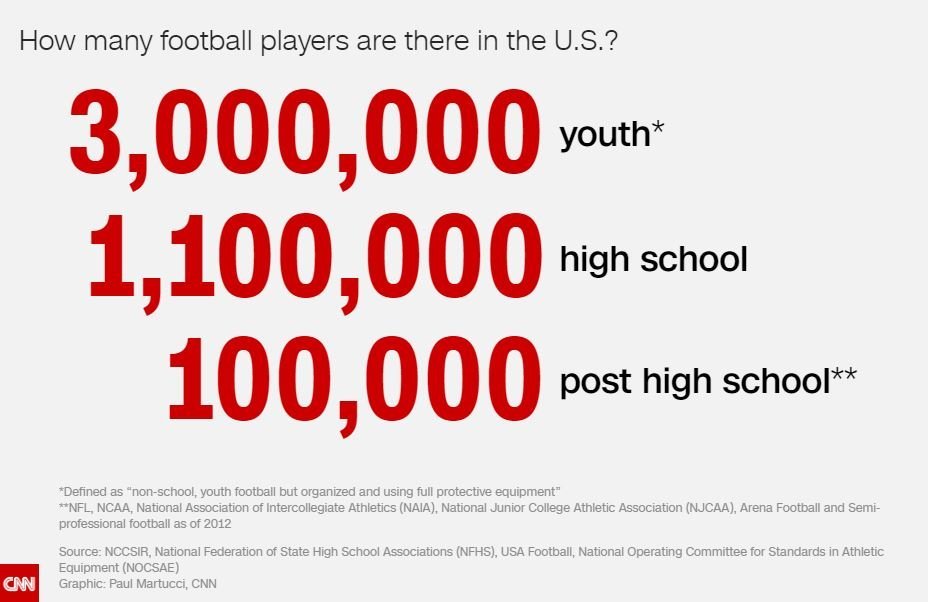 Football deaths at any level are very rare

When it comes to numbers, the National Center for Catastrophic Sport Injury Research publishes one of the most widely referenced annual studies on the subject of football deaths in the US. Its surveys use reports from coaches and other athletic department staff members across the country, as well as media reports and independent research.

According to its 2017 report, more than 4 million kids and young people played some form of organized football last year. Of them, 13 reportedly died as a direct or indirect result of play: four direct and nine indirect. The survey defines “direct” as traumatic results of on-field play: spinal cord injuries, organ lacerations, head injuries and the like. “Indirect” deaths are caused by systemic failures because of exertion: heatstroke and most incidences of cardiac arrest, for example.

Deaths can occur as a result of injury or exertion

Perhaps because of the rising awareness of chronic traumatic encephalopathy, called CTE, a lot of concern seems to focus on brain and spinal injuries as the biggest risk in the sport. In reality, football-related deaths have several causes.

In 2017, the four reported direct deaths were all due to brain injuries. The majority of the deaths that year — the nine indirect cases — were due to heatstroke (hyperthermia) and exertion-related cardiac arrest. Subarachnoid hemorrhage (bleeding on the brain) is another indirect cause of death.

Rarely, football players die as a result of injuries to internal organs. (Three instances were recorded between 1990 and 2010.)

Although there are risks involved in any sport and any type of exertion, the physical and contact-heavy nature of football means players are particularly at risk for brain and spinal cord injury.

“Football is a collision sport; traumatic injuries are frequent and can be fatal,” says a 2017 paper from the US Centers for Disease Control and Prevention.

In comparison, the National Center for Catastrophic Sport Injury Research found 34 instances of heatstroke death during that period.

Player safety is an ongoing challenge

Since the nature of the sport is so brutal, it is an ongoing challenge among health organizations, football organizations and schools and colleges to maintain effective safety policies and practices. And of course, avoiding death isn’t the only aim; traumatic brain and spinal injuries, exertion injuries and other physical consequences don’t need to kill to be devastating.

Player safety in high school, college and pro football organizations has gone through decades of evolution, often with similar measures in relatively the same time frame. In recent years, the NCAA and high school organizations have tightened their definition of and penalties for “spearing” or “targeting,” tackling moves that lead with the helmet and pose a serious brain and spinal injury risk to both the tackler and the target.

Shoring up conduct on the field is only one part of the puzzle when it comes to reducing football deaths and injuries. Recommendations from the CDC and other organizations on how to deal with concussions and exertion-related conditions point to a combination of vigilance, awareness and education.

In early September, the CDC released new guidelines for health care providers about identifying and handling concussions in children. Several involve the awareness and notification of a child’s teachers, coaches and other guardians so that a child’s recovery can be “monitored collaboratively.”

The CDC also has a partnership with the National Federation of State High School Associations for online concussion training. The National Center for Catastrophic Sport Injury Research recommends physicals for all football participants, proper conditioning exercises and an open channel of communication between players and athletic leaders so any signs of distress — whether from concussions, dehydration or hyperthermia — can be immediately addressed.