NORFOLK, Va. — The Old Dominion Monarchs made program history, beating Virginia Tech Saturday in barn burning fashion 49 - 35 and ending its victory in a sack at Foreman Field to run out the clock.

The Monarchs (1-3 overall) matched 13th ranked Virginia Tech's (2-1 overall) scoring ability down the stretch with the help of quarterback Blake LaRussa, who replaced ODU's Steven Williams in the first half of the game.

ODU outscored Virginia Tech in the fourth quarter 28 to 7, capping off its final scoring drive with a 40-yard touchdown run from Jeremy Cox with 1:34 left in the game.

"This is the loudest this stadium has been," said Monarchs Head Coach Bobby Wilder. "I've never had an ODU team represent the 11 letters on the front of their jersey like this team has." 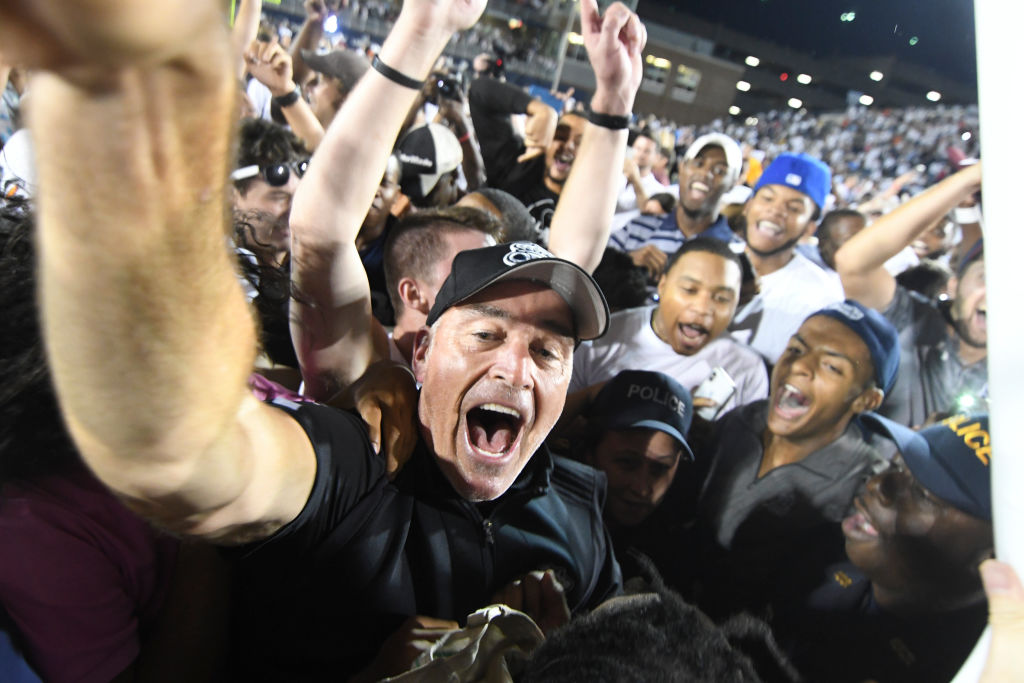 The Monarchs started the game in front of its biggest crowd at Foreman Field down 7-points to Virginia Tech, who scored on its second drive of the afternoon.

ODU would respond with a 14-yard touchdown pass from quarterback Blake LaRussa to J. Duhart. Both of them would find each other again before the end of the second quarter to tie the game.

LaRussa would tie the game at 21 apiece before Virginia Tech climbed to a 28 - 21 lead in the fourth.

The Monarch defense was a key factor though, with big stops late, getting the ball back to ODU's offense in a timely manner to allow them to gain the lead 42- 35 with five minutes to go in the fourth quarter.

The Hokies also hurt themselves over four quarters of football, collecting 7 penalties for 95-years compared to ODU's two penalties for only 10-yards.

"This is a moment I'll never forget," added Wilder in postgame interviews. He said he had 127 messages on his phone within only an hour or two after the game. "This is a life changing moment. Getting married, having two sons & beating Virginia Tech. In that order.”

Wilder is in his 12th year as the head coach for the Monarchs, and is the only coach in program history, taking the Monarchs from FCS to FBS and establishing the program after it had been dismembered in the early 20th century.

Before arguably the biggest win in school history, ODU lost its first three games of the season to Liberty University, Florida International and UNC Charlotte.

The Monarchs will travel to East Carolina to play the Pirates in Greenville, North Carolina, at 3:30 p.m. on Saturday.