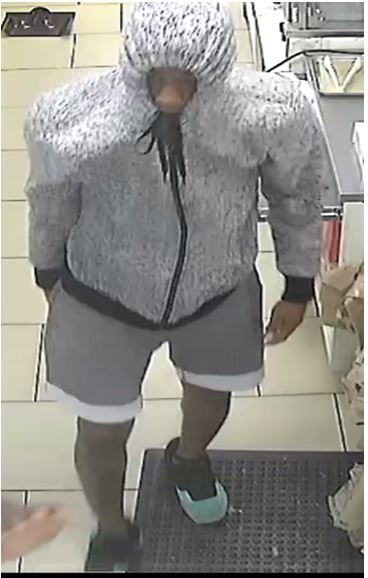 VIRGINIA BEACH, Va. – Virginia Beach Police are searching for two males who robbed the 7-Eleven on Euclid Road of cigarettes and money.

At approximately 11:48 p.m. September 25, the two males entered the 7-Eleven and demanded money. One of the males was armed with a handgun.

The two fled the scene after obtaining numerous cases of cigarettes and cigars, as well as an undisclosed amount of money. There were no injuries during this incident.

The first suspect is described as a black male, 5 feet 7 inches and weighing between 175 and 190 pounds. He was wearing bluish-gray shorts, a gray zip-up hoodie and distinctive-looking two-tone tennis shoes.

The second suspect is described as a black male, 5 feet 7 inches and weighing between 175 and 190 pounds. He was wearing a black Adidas brand hooded sweatshirt, blue jeans and black shoes. He was wearing glasses and had slight facial hair, possibly a thin beard and mustache. This suspect was carrying a blue backpack.

Police are seeking assistance from the public in identifying these two individuals, and are asking anyone with information to contact Virginia Beach Police at (757) 385-4101 or the Crime Line at 1-888-LOCK-U-UP.