Van Dyke, who was also found guilty of 16 counts of aggravated battery, sat impassively in a dark suit — his shoulders slumped — as the verdicts were read in the high-profile case. At one point, he sipped water from a bottle. He was found not guilty of official misconduct.

The officer’s wife sat stoically, arms folded, as the long verdict was delivered. His father lowered his head while some members of the McDonald family held hands.

Van Dyke’s bond was revoked and sentencing was scheduled for October 31. He was led out of the courtroom in handcuffs.

Though he was originally charged with first-degree murder, jurors were instructed Thursday that they also could consider second-degree murder.

Members of the jury later told reporters that Van Dyke’s testimony was not credible and seemed rehearsed. The jurors, who did not give their names, said the veteran police officer did nothing to deescalate the situation that led up to the fatal shooting.

One juror noted as damning testimony that Van Dyke told his partner, “Oh my God, we’re going to have to shoot the guy,” before arriving at the scene. Another juror, a black woman, said race did not factor in their deliberations in the racially charged case.

“We didn’t come here because of race,” she said. “We came here for right and wrong.” 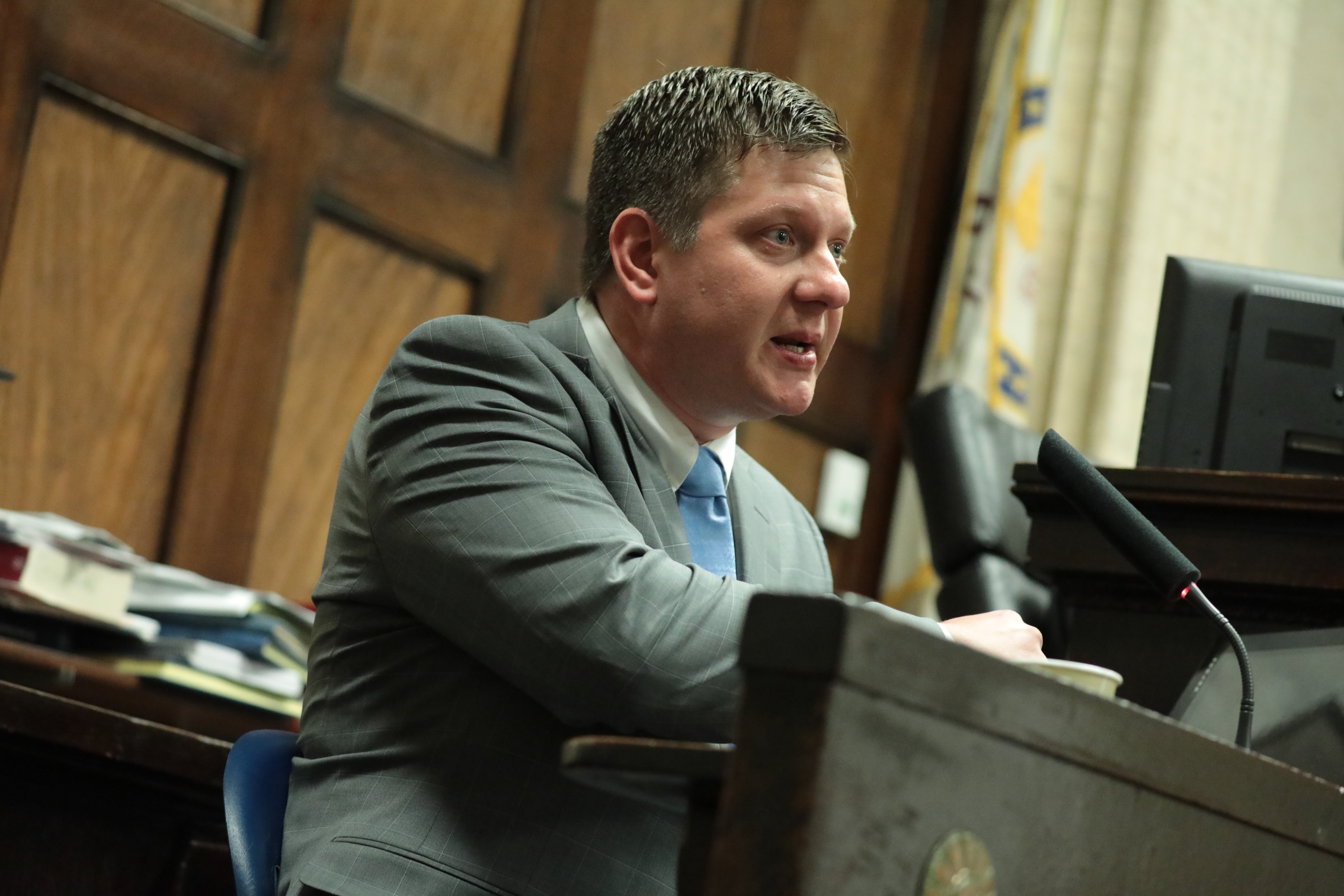 Van Dyke was the first Chicago Police officer to be charged with first-degree murder since 1980.

Defense attorney Daniel Herbert likened his client at trial to a boxer entering the ring with hands tied behind his back.

“We don’t believe the evidence supported the conviction,” he said.

Kevin Graham, president of the Chicago Fraternal Order of Police, said the conviction will be appealed.

“The Chicago Police Department is standing with an officer we think acted as an officer,” he said.

Video of the shooting led to protests, a Justice Department civil rights investigation, criticism of the city’s mayor and eventually the ouster of the police superintendent.

The city has been preparing for possible demonstrations in a case that already sparked protests.

“Let us continue to hear each other and partner with each other — as public servants, police and members of the public — and let us ensure our collective mission is what endures for generations to come,” the statement said.

“The effort to drive lasting reform and rebuild bonds of trust between residents and police must carry on with vigor.”

Still, groups of demonstrators took to the streets soon after the verdict, chanting, “The people united will never be defeated,” and “Sixteen shots and a cover up.”

The shooting was captured on a grainy police dashcam video. Van Dyke said he fired in self-defense after McDonald lunged at him with a knife. But the dashcam video — which a judge ordered the city to release 13 months after the shooting — showed McDonald walking away from police, rather than charging at them.

The city has been preparing or possible demonstrations in a high-profile case that already sparked protests.

“The Chicago Police Department has a comprehensive operating plan to ensure public safety in all of our neighborhoods while simultaneously protecting the rights of peaceful demonstrations,” police said.

What jurors heard in closing arguments

Before Judge Vincent Gaughan dismissed them for the day Thursday, jurors requested a transcript of testimony from former Officer Joseph Walsh, Van Dyke’s partner the night of McDonald’s death.

In closing arguments, a prosecutor said Van Dyke showed no regard for the life of the black teenager, while the defense portrayed him as a police veteran ensnared in a tragedy but not a murder.

“You heard what it was that he said, ‘I guess we’ll have to shoot him,’ ” Gleason said, referring to testimony about what Van Dyke told his partner before arriving at the scene.

“It wasn’t the knife in Laquan’s hand that made the defendant kill him that night. It was his indifference to the value of Laquan’s life.”

When Van Dyke took the stand Tuesday, Gleason asked about a statement he made to his partner as they approached the shooting scene: “Oh my God, we’re going to have to shoot the guy.”

“I thought the officers were under attack,” Van Dyke said.

Gleason told the jury Thursday, “We know the defendant contemplated the decision to shoot Laquan before he even got out of his vehicle. … And he never adjusted that mindset.”

Defense attorney Herbert, in his closing, sought to discount a piece of evidence at the center of the case: video of the shooting.

“We have to look at this from Jason Van Dyke’s perspective,” he said.

He added, “The state wants to watch the last two minutes of this movie without knowing the context.”

Herbert said there was no question the case is tragic but it did not amount to murder.

“It’s a tragedy that could have been prevented with one simple step,” he said. “At any step during that 20-minute rampage — if Laquan McDonald had dropped that knife — he would have been here today.”

Van Dyke told the jury Tuesday that McDonald’s face was expressionless — “his eyes were just bugging out of his head” — as the teenager kept “advancing” on him, holding a knife.

Standing about 10 to 15 feet away, McDonald “turned his torso towards me,” the officer testified.

“He waved the knife from his lower right side, upwards, across his body, towards my left shoulder,” the officer said, appearing to get choked up as he demonstrated the action to jurors.

The officer told jurors he then shot McDonald.