CHESAPEAKE, Va. - Crews with the Chesapeake Fire Department were called to the scene of a house fire in the 4400 block of Peach Road late Saturday night.

Units arriving on scene of a vacant house on Peach Rd. Flames through the roof. Water shuttle in operation. E10 in command. pic.twitter.com/y0npLO8FkA

Dispatchers received the call at 11:31 p.m. and arrived nine minutes later. When crews arrived, they found a single-story home on fire.

The house, located in the Sunray neighborhood in the Bowers Hill area of Chesapeake, was determined to be vacant. No other structures were impacted.

Crews extinguished the blaze and called it under control at 12:25 a.m. No injuries were reported, and the incident is still under investigation.

This incident was the first blaze crews responded two before going to Dock Landing Road for another vacant home that caught on fire three hours later.

News 3 spoke with a woman who said the home on Peach Road is her friend's parent's property and she had plans to use the home for a good cause.

"Devastated, confused, heart broken, don't understand it. I was hoping for this place to become an animal sanctuary to save animals," she mentioned.

Many neighbors in the are believe the fire on Peach Road and Dock Landing Road are connected, however that information has not been confirmed by officials. 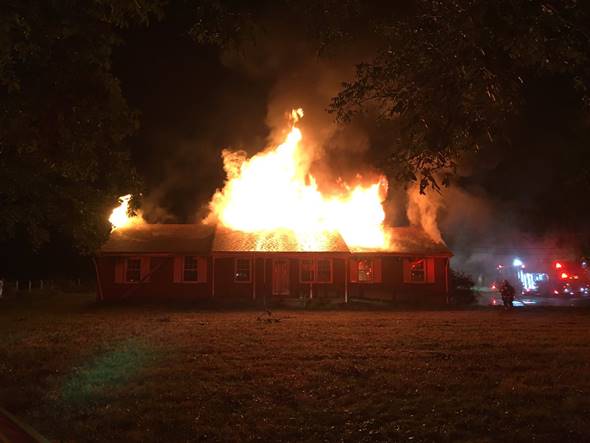