Mason Foster of the Washington Redskins reacts after making a stop against the New York Giants. (Photo by Elsa/Getty Images)

EAST RUTHERFORD, NJ – Behind a dominant defensive effort in a division game, the Redskins are 5-and-2 for the first time in a decade.

Sunday, Washington smothered Eli Manning and the New York Giants (1-and-7, 0-and-3 in NFC East) 20-13 at MetLife Stadium on its way to a third straight victory. The win, just Washington’s second at the Giants since 2011, keeps the ‘Skins alone in first place in the NFC East division.

Eli Manning of the New York Giants is sacked by Ryan Kerrigan of the Washington Redskins. (Photo by Elsa/Getty Images)

For the game, the Redskins (5-and-2 overall, 2-and-0 in NFC East) sack Giants quarterback Eli Manning seven times and intercept him twice. Both of Manning’s picks were snatched by safety D.J. Swearinger, who has four interceptions on the season. New York didn’t find the end zone until its final offensive play of the game.

At 5-and-2, the burgundy and gold lead the division by 1.5 games over the 4-and-4 Eagles, who, at 1-and-0 in the NFC East, are the only other team in the division yet to lose an NFC East game.

The Redskins, having won all five games this season in which they’ve scored first, opened the scoring with an Alex Smith to Adrian Peterson seven-yard touchdown connection in the first quarter to give Washington a 7-0 lead. Late in the fourth quarter, with his team clinging to a 13-6 lead, Peterson raced 64 yards for a game-sealing touchdown. For the game, Peterson runs for 149 yards on 26 carries.

Adrian Peterson of the Washington Redskins celebrates with Alex Smith after scoring a touchdown. (Photo by Elsa/Getty Images)

The remainder of the Redskins’ scoring comes courtesy of kicker Dustin Hopkins, who booted field goals of 53 yards and 39 yards.

For the game, Alex Smith completes 20-of-32 passes for 178 yards and a touchdown. Receiver Josh Doctson hauls-in a career-high five receptions for 49 yards.

On the defensive side of the ball, Matt Ioannidis recorded 2.5 sacks, while Ryan Kerrigan tallied 1.5. Linebacker Mason Foster leads the way with nine tackles. 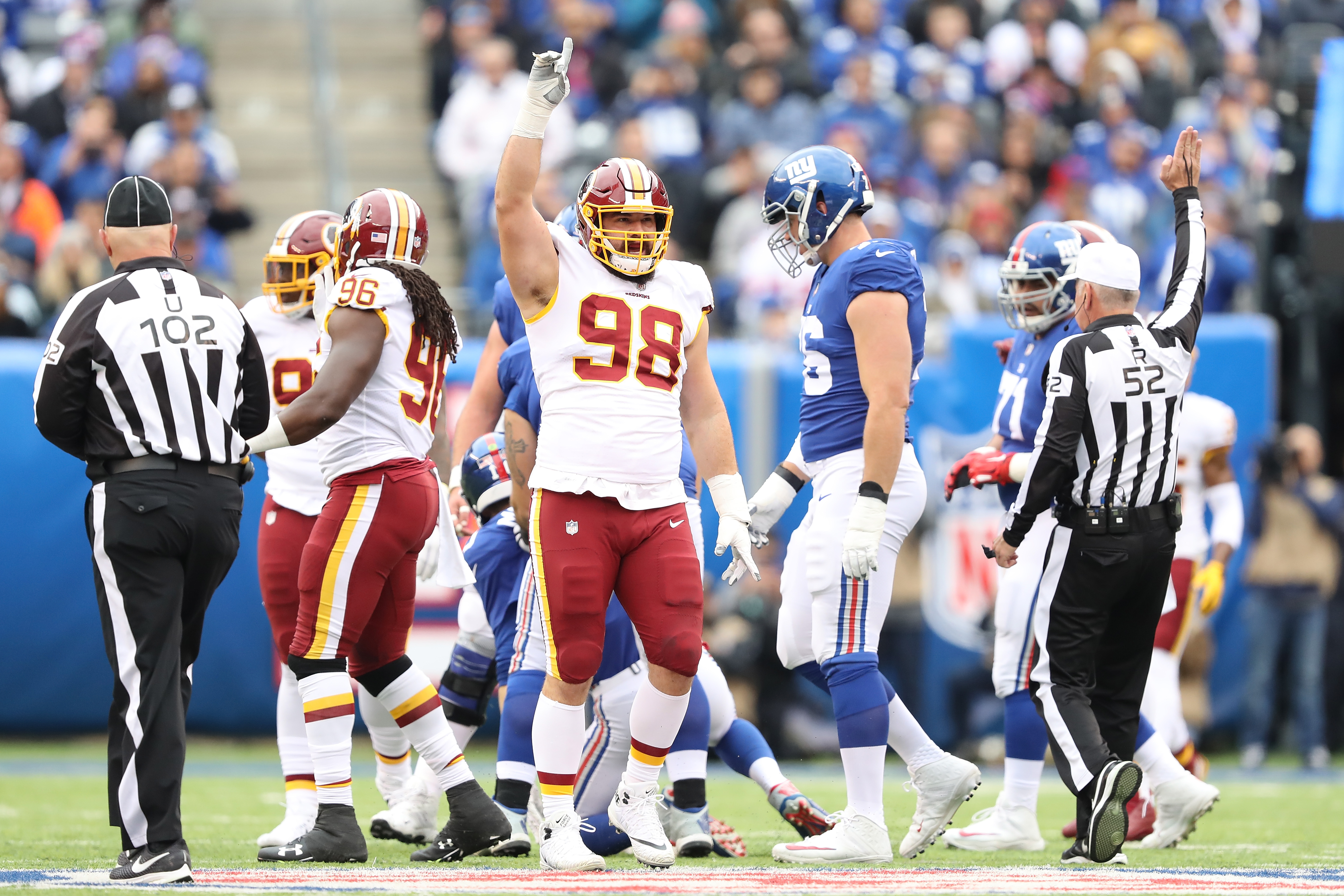