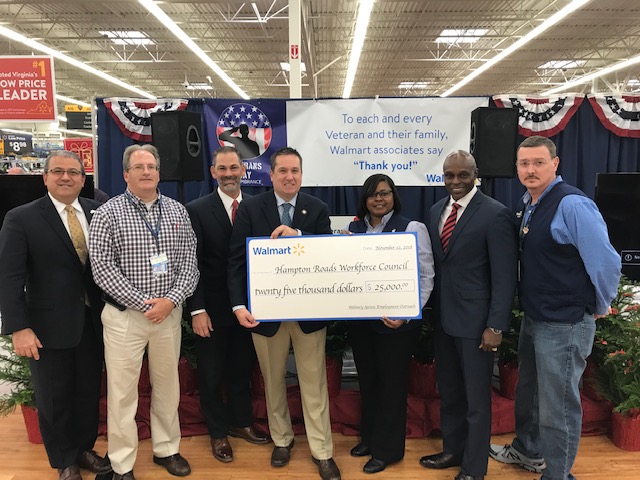 HAMPTON ROADS, Va. – Walmart is committed to serving those who have served our country.

In honor of Veterans Day, the retailer announced it has donated $75,000 to two non-profit organizations that serve Hampton Roads. Of the donations, $50,000 will go to the Travis Manion Foundation to jumpstart their “Character Does Matter” mentoring programs in local schools, while $25,000 will go to the Hampton Roads Workforce Council for efforts supporting employment for military spouses.

Walmart presented the checks on Monday.

The company also announced it has hired more than 640 veterans in Virginia Beach as part of the Veterans Welcome Home Commitment, which was established in 2013 and enhanced in 2015. Walmart will give hiring preference to military spouses, making it the largest American company to make such a commitment.

“After I left the Navy and completed graduate school, Walmart was my first job as a civilian,” said Valerie Ferrell, Walmart associate in Portsmouth and Navy veteran. “The leadership and organizational skills I learned through my training in the Navy helped me successfully transition and adapt into multiple positions at Walmart. In my role at Walmart I have been able to help recruit veterans and their spouses from every branch of the military and help them make the same successful transition. I am extremely proud to be a part of a company that focuses on hiring veterans and supporting their spouses and families.”

The Veterans Welcome Home Commitment is dedicated to hiring 250,000 military veterans by 2020. After the announcement that Walmart has hired more than 212,000 veterans nationwide since the implementation of the initiative, it is on track to surpass this goal next year.

Additionally, more than 32,000 veteran associates have been promoted since joining the Walmart and Sam’s Club teams.

“Military spouses are unsung heroes,” said Walmart President and CEO, Doug McMillon, today during a Veterans Day ceremony at the company’s headquarters in Bentonville. “They serve in partnership with their uniformed spouses, and we want to honor them and help them find a job or build an amazing career. To military spouses: You’ve got a home at Walmart!”

According to the company, there are more than 500,000 active duty military spouses across the U.S. While the national jobless rate is around four percent, military spouses face a 26 percent unemployment rate and a 25 percent wage gap in comparison to civilians.

While 77 percent of military spouses want or need work, the Department of Defense Military Spouse Employment Partnership says frequent relocation is often a barrier to finding and maintaining a rewarding career.

“We have a duty to honor veterans and military families,” said Retired Brig. Gen. Gary Profit, senior director of military programs for Walmart. “But, more importantly, they are tremendous assets to our business. Military spouses bring many of the same leadership qualities we see in veterans, yet they are disproportionately unemployed. We welcome them to Walmart and hope they will consider us for the next step on their career journey.”