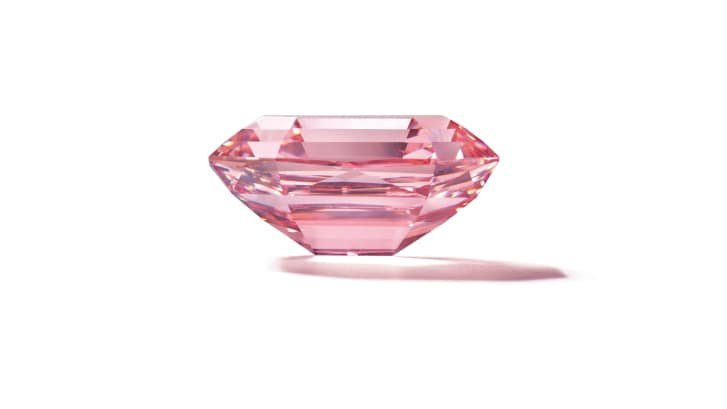 After five minutes of bidding, the 18.96-carat Pink Legacy became the world record holder for price paid per carat for a pink diamond at auction.

Christie’s international head of jewelry, Rahul Kadakia, said it was purchased by American luxury brand Harry Winston, and will be renamed the Winston Pink Legacy.

“You have to acknowledge first that the Pink Legacy diamond was a very special diamond,” Kadakia said. “It is one of the best and finest examples of pink diamonds at this size and color and it proved it with a new world record price per carat.”

The diamond went under the hammer as part of the annual Magnificent Jewels auction and attracted a huge amount of interest because of its large size and impressive color grading.

Pink Legacy is categorized as a “Fancy Vivid” diamond, the highest grade of color intensity. Only 1 in 100,000 diamonds receives the grading.

The diamond is an even rarer find because of its size, as Fancy Vivid Pink diamonds larger than 10 carats are “virtually unheard of,” according to Christie’s.

“This record-busting price fetched suggests the diamond trade is in good health and signals the market’s sensitivity to Australia’s Argyle mine’s imminent closure in 2020,” Eddie LeVian, CEO of jewelers Le Vian, said in a statement. “With Argyle producing 90% of the world’s pink diamonds, what do you think the value of this diamond will be in five years from now?”

Christie’s did not identify the jewel’s latest owners but it once belonged to the Oppenheimer family, who ran the De Beers diamond mining company for three generations until selling their stake in 2011.

The sale is the latest in a booming market for large pink diamonds.

In April 2017, a 59.6-carat diamond known as the Pink Star became the most expensive jewel sold at auction after going for $71.2 million at Sotheby’s in Hong Kong. It was the largest polished diamond ever auctioned.

Then in November 2017, the Pink Promise sold for $32.5 million at Christie’s Hong Kong. At almost 15 carats, the diamond sold for a record-breaking $2.176 million per carat. The sale of Pink Legacy has surpassed that, at $2.637 million per carat.

It is set to be a big week for Christie’s as a painting by British artist David Hockney is expected to smash the record for a work by a living artist sold at auction.

“Portrait of an Artist (Pool with Two Figures)” is set to be sold at Christie‘s Post-War and Contemporary Art Evening Sale at New York’s Rockefeller Center on November 15 for an estimated $80 million.