How they moved on after their houses of worship were attacked 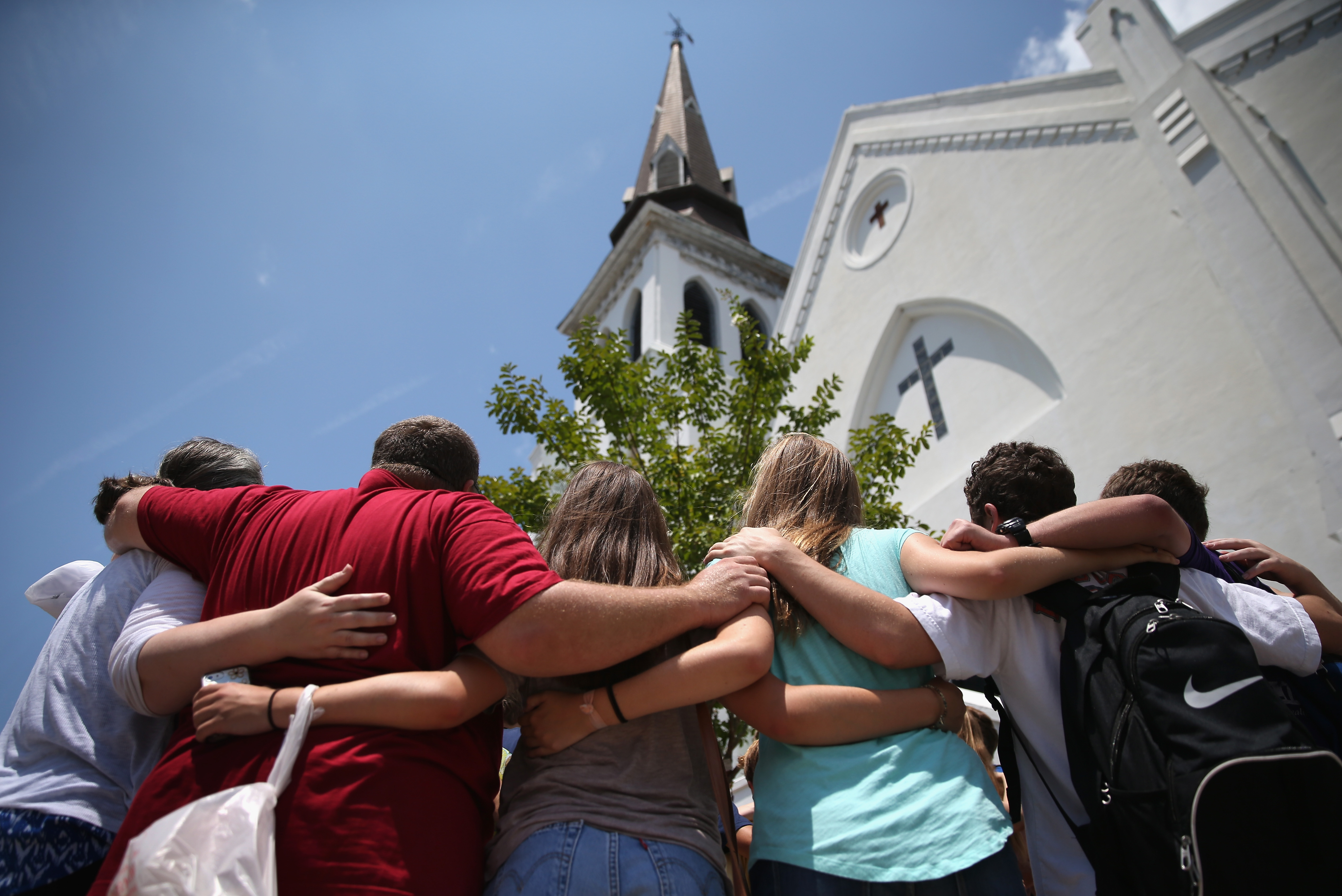 When a house of worship is attacked — when it becomes a crime scene, stained with blood — how do you move forward? How do you come back to worship and make it a safe, holy place again? How do you support your congregation as it reels from the loss?

The Rev. Eric Manning and the Rev. Frank Pomeroy were both forced to face these questions when gunmen stormed their sanctuaries.

In the aftermath of the shootings at their sanctuaries, Manning and Pomeroy have embraced the role of being shepherds to their congregations — exercising patience as members push through their grief, attending a murder trial, and facilitating discussions around difficult decisions, like what to do with the sanctuary.

Now, rabbis at the Tree of Life synagogue find themselves in a similar position, after a gunman killed 11 worshipers last month in Pittsburgh.

Manning and Pomeroy shared with CNN some of what they learned as they helped their flocks heal.

SUTHERLAND SPRINGS, TX – NOVEMBER 09: Visitors leave flowers at a memorial where 26 crosses were placed to honor the 26 victims killed at the First Baptist Church of Sutherland Springs on November 9, 2017 in Sutherland Springs, Texas. On November 5, a gunman, Devin Patrick Kelley, shot and killed the 26 people and wounded 20 others when he opened fire during Sunday service at the church. (Photo by Scott Olson/Getty Images)

Pomeroy, 52, was traveling with his wife on the morning of the attack. A guest pastor preached the day’s message. Pomeroy’s daughter, Annabelle — a 14-year-old who loved the color purple so much it covered the walls and carpet of her room — was killed.

To begin with, Pomeroy said religious leaders must make sure to focus on God and on the people around them.

“Even prior to the tragedy, you’ve got to make sure your church is focused on Christ, something bigger than yourself. So that in the aftermath, you’re not trying to run under your own power or focus on the things that are just about you,” he said.

“As long as you’re already focused on something greater than yourself or focused on others, then in the aftermath, you’ll be able to do the same. You’ll already have the habit of focusing on others through Christ.”

He recalls being “somewhat in a fog” for the first few weeks after the shooting, but said it is important to focus on the survivors. He tried to remind them they were not alone, he said.

“My immediate attention would be to focus on the lives first of the survivors, and the family of the victims, and then the rest of the body as a whole,” Pomeroy said.

Seven days after the shooting, Sutherland Springs held service again, this time in a community center next to the church.

“As a body, we felt like if we had skipped Sundays or closed the church, then evil won — even for a little bit,” Pomeroy said.

He said he can’t say whether he was coherent then. He went through the motions, relying on “muscle memory,” he said.

“The words just came forth,” he said.

‘There is no magical date’

CHARLESTON, SC – JUNE 21: Gloria Moore watches the church as parishioners take their seats at the Emanuel A.M.E. Church four days after a mass shooting that claimed the lives of it’s pastor and eight others at the historic Emanuel African Methodist Church June 21, 2015 in Charleston, South Carolina. Chruch elders decided to hold the regularly scheduled Sunday school and worship service as they continue to grieve the shooting death of nine of its members including its pastor earlier this week. (Photo by David Goldman-Pool/Getty Images)

Mother Emanuel Church was an active crime scene; it had to be returned to a house of worship before the church held service again four days after the fatal shooting.

“After it is released, they never clean it, they never turn it back to the way that it was before. So, then you have to go through the process of having professionals come in to clean it,” said Manning, 50.

And that was hard, said Manning, who was handpicked to shepherd the congregation a year after the shooting.

“Even though the cleaning crew did come in, they were never able to remove all the bullet strikes on the floor,” he said.

Manning said it’s important to be “mindful that, though there may be a push to get the sanctuary, the mosque or the synagogue reopened, don’t rush it.”

He said members of the congregation may have different feelings on when to hold service again.

Days after the shooting in Pittsburgh, Manning flew there to meet and offer comfort to Rabbi Jeffrey Myers, who lost several members of his congregation.

“I’ve been there,” Manning said.

Both Manning and Pomeroy said the congregation as a whole should decide whether to leave the house of worship, and when to return.

Manning said Emanuel’s leaders rededicated the lower level, where the shooting took place, to God in April 2017 “in a quiet prayer ceremony of anointing,”

“Now, people may say that really doesn’t do anything. But from a spiritual perspective, it does,” he said.

The congregation discussed remodeling the room where the shooting took place but decided against it, Manning said. He agreed.

“I don’t want anyone to forget the price that was paid and what happened here,” he said.

Immediately after the shooting, First Baptist turned its sanctuary into a memorial.

A new sanctuary is being built behind the memorial while the church holds service in modular buildings, Pomeroy said.

“That ground will always be hallowed ground, whether we leave the sanctuary there, whether it becomes a garden or whatever it may be,” Pomeroy said. “The church is within the people; it’s just concrete, wood and shingles to me.”

At some point, the congregation will have to decide what to do with the old sanctuary in the long-term, Pomeroy said.

Manning said part of his role was to be a shepherd through Roof’s trial. In the courtroom, he prayed for families of victims and wrote prayers for those testifying.

But he didn’t shoulder the burden alone.

A team of pastors prayed with Manning, reflected on scripture and sang songs of praise before the trial, he said.

He used sermons to address issues uncovered during the trial because it seemed the only way to address them was through scripture.

“At times, people would say through those sermons that I preached or in that time period, they got the feeling I was ministering to myself,” Manning recalled.

Remember that everyone grieves differently

NEW YORK, NY – OCTOBER 29: People participate in a candle light vigil in memory of the victims of the mass shooting at the Tree Of Life Synagogue on the steps of Queens Borough Hall on October 29, 2018 in New York City. Eleven people were killed and six more were wounded in the mass shooting that police say was fueled by antisemitism. (Photo by Stephanie Keith/Getty Images)

Both leaders say it’s important to not rush their congregation’s healing — to be patient with them, and sit with them when needed.

Pomeroy said he has encouraged survivors to seek professional therapy and counseling. “As a body, coming together and just trusting the Lord to bring this to be” helps with the healing, too, he said.

“It all comes down to whether or not we’re letting God work in our hearts and our lives,” he said.

He said it’s also important to remember that everyone mourns at their own pace; there are times when he feels he’s past the darkest days of his grief, while his wife, Sherri, is still struggling.

“Even though we’re in the same house, been married 32 years, we’re just different people,” he said. “Every person grieves a little differently.”

On the one-year anniversary earlier this month, Pomeroy read off the names of victims. It was “probably one of the most difficult things I’ve ever done,” he said.

But in the end, he said, it was very healing for everyone.