What if you could simply look at a screen for two seconds and check in for your flight?

Imagine glancing at a screen for another two seconds to drop off your bags at a luggage station? How easy would it be to merely look at another screen to breeze through ID checks at TSA security checkpoints or the departure gate?

All this, without having to use your passport.

Well, now you can.

“Atlanta airport — the busiest airport in the world, our largest hub — is the first airport in the US to roll this out,” Delta Chief Operating Officer Gil West told CNN at the terminal’s opening on November 29. “It saves nine minutes on the ground for the boarding process which is time that our customers won’t be spending in lines waiting to board the aircraft.”

The biometric ID technology being used here is facial recognition. It’s a camera-based system that compares scans of travelers’ faces to a database of verified ID photos curated by US Customs and Border Protection (CBP).

Delta’s competitors — including JetBlue, American Airlines and Southwest Airlines — have started pilot facial recognition programs at a handful of US airports for international boarding. But so far, Delta says Atlanta is the only airport to also offer biometrics for check-in, luggage and TSA ID checks.

CBP says America’s air travel industry is on a path toward widespread adoption of facial recognition verification at all US airports with international flights and eventually, say industry leaders, domestic flights too.

It’s the “next leap in airport security,” says Matt Cornelius, vice president of Airports Council International, North America. Although Cornelius is confident in the technology and it “continues to evolve very rapidly,” he says it “still has a lot of development to go.” 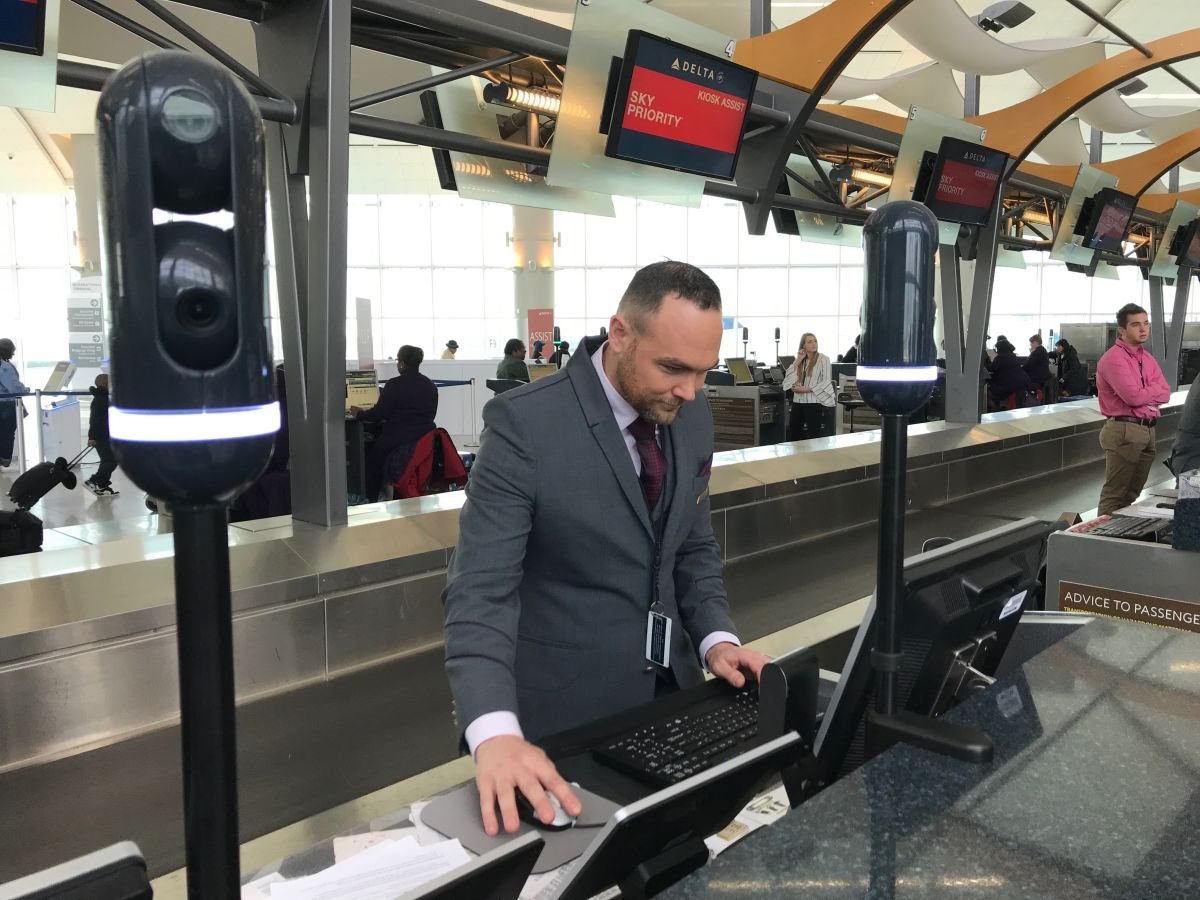 Using the system is totally optional.

Passengers who don’t feel comfortable using it can opt to go through traditional ID verification using their passports. Privacy groups say they’re worried facial recognition databases are subject to limited accountability and vulnerable to government abuse or lack of oversight.

Experts and authorities believe biometric ID technology will make airports and air travel safer in an era when aviation is targeted by criminals and terrorists.

Related: Jabbrrbox: An airport lounge all to yourself

Your face can be your passport

In a nutshell, here’s how it works:

— Check in to your flight at one of several kiosks in the international terminal by pressing a touch-screen tab labeled “LOOK: Facial Recognition” and looking into the screen. The image is compared to the image on file in the CBP database.

— Drop your luggage at the nearby airline baggage drop station by looking into a camera.

— At the TSA screening area, look into a scanner screen and show your boarding pass. No need to pull out your passport or driver’s license.

A typical stop at a TSA ID check station can take 11-20 seconds. With this — in less than three seconds — boom, you’re cleared to continue on through the TSA passenger and carry-on baggage screening lanes.

Next year at Atlanta’s international terminal, TSA plans to use facial recognition so participating travelers won’t have to show a boarding pass either.

Finally, at your departure gate, instead of having to pull out your passport before you board your international flight, just briefly stare into a screen set up at the jetway entrance. In 2 seconds, you’re cleared and bouncing down the jetway to your seat. An airline gate agent is staffing the screen to take care of any technical hiccups.

Yep, once in a while, the screen doesn’t recognize a face.

In fact, about 1% or 2% of the time, face scans aren’t able to verify passengers, said John Wagner, CBP deputy assistant commissioner. He blames that on bad scan images — poor lighting conditions, for example. “If you do get rejected, all you do is present your passport and your boarding pass.”

Wagner says the technology will be continually improved with a goal of 100% effectiveness.

When it does work, the CBP’s facial recognition database can help authorities nab travelers who use false passports. Recently three airline passengers at Washington’s Dulles International Airport were caught over a period of 40 days, according to CBP.

When authorities have your facial image in a database, you’re giving up control over how the government can use it, said Jeramie Scott at the Electronic Privacy Information Center, a Washington-based organization aimed at protecting privacy.

Delta’s West said the airline never has control of the CBP database — “only the ability to access it to verify identity.”

Privacy advocates are calling on lawmakers to create legal safeguards to prevent the abuse of these kinds of databases.

As for passengers, Keary King of Dothan, Alabama, said he was willing to try the CBP system. “We have no privacy concerns,” he said, waiting with his family to board Delta Flight 365 to Mexico City.

“Maybe it makes the boarding a little quicker,” King said. “That would be good, not only for me but for all the passengers.”

Most of the flight’s 124 passengers who originated in Atlanta used the facial scanner and boarded the Boeing 737-700 on time in about 10 minutes. Only a few had to show their passports because the system rejected their scanned images.

It’s expanding to other airports

Outside the US, airports such as Singapore’s Changi, Amsterdam’s Schiphol and Aruba International Airport reportedly already offer biometric check-in and boarding capability at some gates and terminals.

Meanwhile, Delta is expanding its biometric program. “We’ll look to scale this at all our hubs internationally, and aspirationally, throughout our entire operations,” West said, implying the addition of US domestic travelers. Delta plans to kickoff a facial recognition option for customers flying internationally out of Detroit in mid-December.

Passengers should always have the ability to opt out of any facial recognition system, Cornelius said.

Full implementation is “a number of years away,” Cornelius said. Wagner said the CBP hopes to have facial recognition boarding at all US airports serving international flights within 3 or 4 years.

Right now, airports’ main concern is getting these systems up to speed, Cornelius said.

If all goes as planned, airports believe facial recognition can reduce those annoying bottlenecks at security lines and make air travel safer for all of us.