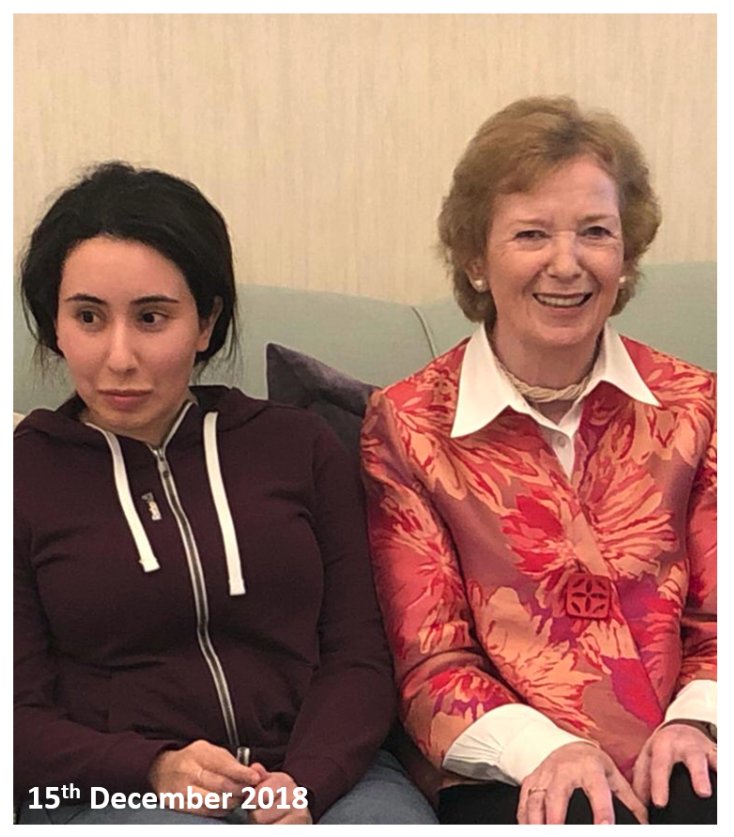 The United Arab Emirates has released pictures of a daughter of Dubai’s billionaire ruler, who hadn’t been seen publicly since she attempted to flee abroad earlier this year.

Sheikha Latifa bint Mohammed Al Maktoum was last seen in March onboard a yacht off the coast of India before a raid by Indian and Emirati forces took her back to Dubai, according to two people who had helped plan her escape.

Dressed in a dark hooded sweatshirt and gray jeans, Sheikha Latifa — the daughter of UAE Prime Minister Sheikh Mohammed bin Rashid Al Maktoum — either looks away from the camera or towards Robinson.

Robinson made the visit at the request of the ruling family, according to a communique the UAE mission in Geneva sent to the Office of Special Procedures at the High Commissioner for Human Rights for the United Nations.

“The documents respond to and rebut false allegations that have been made about Her Highness, providing evidence that she is alive and living with her family in Dubai,” the statement said.

Before her attempted escape, Sheikha Latifa recorded a 39-minute video detailing why she was risking a second attempt to flee Dubai and the ruling family.

She claimed she was tortured and detained for three years — sometimes in solitary confinement — following her failed attempt to leave the UAE in 2002 as a teenager.

“If you are watching this video, it is not such a good thing. Either I’m dead or I’m in a very, very, very bad situation,” Sheikha Latifa said in the video, which was posted online after her disappearance in March.

“They are not going to take me back alive,” she said.

Related: For 7 years, she plotted her escape from ‘caged luxury’

In the video, Sheikha Latifa complained of restricted movement and said she sought freedom for herself and her older sister Sheikha Shamsa, who reportedly tried to escape the family’s UK estate in 2000 but was found and brought back to the UAE.

Sheikha Latifa, once well known for her skydiving videos brandishing the Emirati flag, said she couldn’t leave Dubai without permission.

“If you are female, your life is so disposable,” she said.

She sought to escape with the help of a former French spy, Hervé Jaubert, who authored a book chronicling his own escape from the UAE in 2008 following corruption charges.

Jaubert, his yacht crew, and Sheikha Latifa’s Finnish friend Tiina Jauhiainen were briefly detained and released in March, according to Detained in Dubai, a UK-based group.

“Latifa’s allegations against Sheikh Mohammed are grave and warrant a full investigation,” Radha Stirling, CEO of Detained in Dubai said in March.

Months later, the Al Maktoum family released a statement to respond to BBC and PBS reports on the incident, saying Jaubert demanded ransom.

“Unfortunately, Sheikha Latifa was vulnerable to exploitation primarily by Mr Hervé Jaubert, a man with a criminal record. He and his accomplices demanded payment of a ransom of USD $100 million, shortly after Her Highness disappeared from Dubai, for her return,” the statement said.

CNN has reached out to Jaubert for a response to these allegations.

“If she is deprived of her liberty, she should have contact with lawyers and loved ones and access to all fair trial guarantees. If she is only held for having tried to flee the country or for any other reason incompatible with human rights standards, she should be immediately and unconditionally released and her right to freedom of movement, including travel abroad, should be respected,” Amnesty said in a statement.

In the video statement recorded before this latest episode, Sheikha Latifa said she looked forward to a life of freedom and choices.

“I have no reason to come back here,” she said.