The white casket of 7-year-old Jazmine Barnes, killed in a drive-by shooting, was carried into a church Tuesday, a tiara among the purple and white flowers that topped it.

Inside the casket, pink hearts adorned the words “Princess Jazmine.” On its side were the words, “Jazmine ‘Jazzy Fay’ Barnes,” the nickname for the girl who loved hugs, playing “classroom” and singing louder than the radio.

Despite police reporting the youngster was shot in the head, her family opted for an open casket viewing before the funeral ceremony. Jazmine wore a floral print skirt, pink blouse and pink cardigan. A bejeweled headpiece was wrapped around her braided hair.

Jazmine’s mother, LaPorsha Washington, opened the funeral by reading a letter — which she said was from her daughter in heaven — to the mourners who filled more than half of the 2,000-person sanctuary of Community of Faith Church in Houston.

“I am grateful to everyone,” she said, her arm in a sling from an injury she suffered in the shooting. “This is a celebration.”

Christopher Cevilla, the girl’s father, told congregants that Jazmine is “all of our daughters, everybody.”

“God blessed me and my family with an angel. He’s seen fit to take her back to heaven to be with him, but her job was done,” he said. “I know she’s smiling down, and God’s going to get the glory out of everything.”

Other speakers included Houston Mayor Sylvester Turner, US Rep. Sheila Jackson Lee and Harris County Sheriff Ed Gonzalez, whose office is investigating the shooting and who told the crowd, “I look forward to the day where I can truly say rest in peace to Jazmine. Justice has been served.” 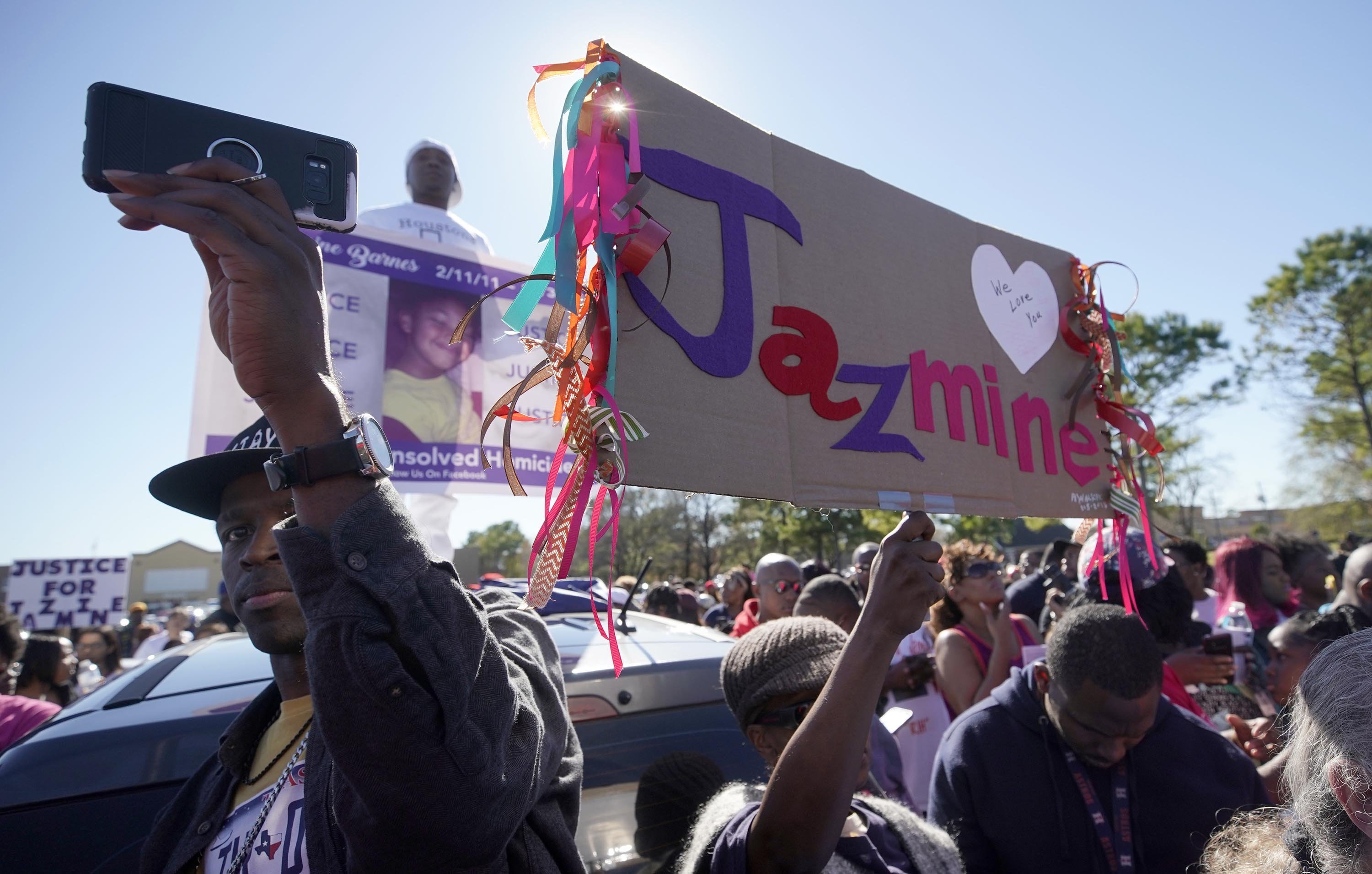 Jazmine was shot the morning of December 30 as she sat in the back seat of her mother’s car during a trip to Joe V’s Smart Shop. Washington said she noticed a red or maroon pickup stop next to them at a red light.

Soon after, shots began targeting their car, shattering windows and injuring Washington. Jazmine, who would have turned 8 on February 11, was shot in the head and killed.

The Harris County Sheriff’s Office filed capital murder charges against Eric Black Jr., 20. He is being held without bail.

Prosecutors said he confessed to driving the car from which Jazmine was shot, and a gun found in his home was consistent with eight shell casings found at the scene. A second man opened fire on the vehicle carrying Washington and her daughters, authorities said.

An anonymous tipster told police that Black and a second person, identified as “L.W.,” shot at the car after mistaking it for another one.

The community rallies behind Jazmine’s family

Hundreds gathered Saturday to honor Jazmine outside a Walmart near where she was killed.

“Every time I see one of y’all reach out for me, I can hold my head up,” her mother said. “I can get up in the morning.”

Jazmine’s case has moved thousands of people across the country.

A GoFundMe account set up to help cover funeral costs has raised more than $82,000 from nearly 3,000 donors.