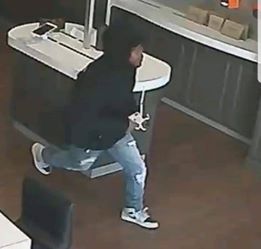 HAYES, Va. – The Gloucester County Sheriff’s Office is looking for the suspects who robbed a Verizon store on January 14.

The suspects stole two iPhones and two Samsung phones. The men then fled the store on foot and possibly left in a dark colored sedan.

The stolen phones were valued at more than $3,000.

You can help the sheriff’s office identify these suspects by contacting their office with any information and sharing these images.

Anyone with additional information about this incident is asked to contact Investigator Leo Mendoza at 804-693-6089 or call the Crime Line at 1-888-LOCK-U-UP.

Information which leads to an arrest would make the tipster eligible for a cash award of up to $1,000 and all Crime Line calls are considered anonymous.