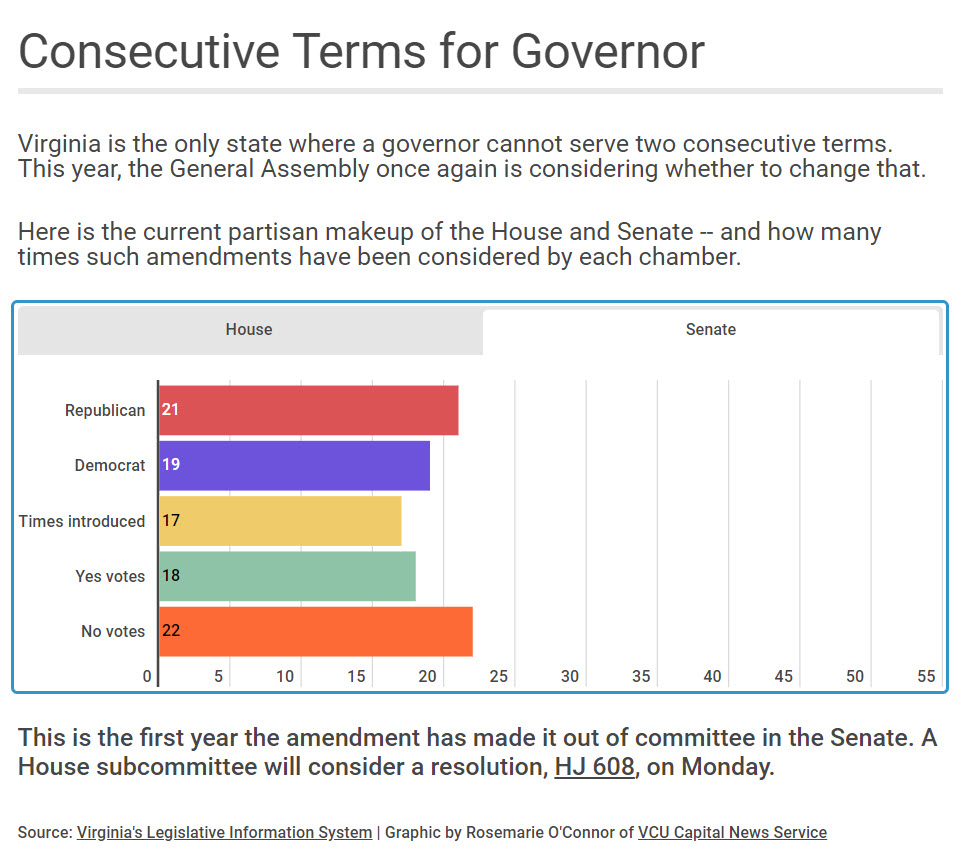 RICHMOND — Virginia is the only state where a governor cannot serve two consecutive terms. But if voters think their governor is doing a good job, why shouldn’t he or she be re-elected?

Democrats, who have won the past two gubernatorial elections, generally support allowing governors to succeed themselves. Republicans generally oppose it. Political experts say Virginia’s one-term policy for governors is rooted in history.

Del. Dawn Adams, D-Richmond, called the policy, which is enshrined in the Virginia Constitution, a “detriment to the commonwealth.” She is sponsoring House Joint Resolution 608, which would let governors elected after 2021 serve two terms in a row.

“Now is the time we should look to pass a constitutional amendment for consecutive but limited governor terms,” she said.

Last week, the Senate defeated an identical amendment, Senate Joint Resolution 250, on an 18-22 vote. Fifteen Democrats and three Republicans voted for the measure, and 18 Republicans and four Democrats voted against it.

On Monday, Adams’ resolution is scheduled for a vote by a subcommittee of the House Privileges and Elections Committee. The panel also plans to consider HJ 627, an identical proposal by Del. Mark Levine, D-Arlington.

Similar resolutions have been introduced since 2013 in the General Assembly but have never made it out of committee — which is why supporters were happy that SJ 250 even made it to the Senate floor. They say limiting the governor to one term doesn’t make sense given that Virginia operates on a two-year state budget.

Senate Majority Leader Thomas Norment, a Republican from James City County, voted against the amendment. In urging his colleagues to do the same, he mentioned two past governors — Democrat Terry McAuliffe and Republican Jim Gilmore — whom he wouldn’t have wanted in office for more than four years.

“I would very succinctly and ecumenically say two words: Gilmore and McAuliffe,” Norment said, drawing laughter from some fellow legislators.

Supporters of amending the constitution compare term limits on the governor to a business that gets a new boss every four years.

“What real challenge can any company overcome when its leader is but a blip on the trajectory of an employee’s career?” Adams asked.

Under Virginia’s biennial budget system, each new governor begins under the predecessor’s budget. The governor must wait until the second legislative session before proposing a budget that covers the second and third years in office. In the fourth year, the governor submits a plan for another two-year budget that a successor might or might not endorse but has little power to change.

Adams said the lack of continuity in leadership has led to “inefficiency, waste, duplication of services, low morale and low productivity.”

Opponents of changing the constitution note that while governors cannot seek re-election, they can still serve nonconsecutive terms. However, only one governor has done that since the Civil War. Mills Godwin Jr. was elected as a Democrat in 1965 and again as a Republican in 1973.

Virginia’s prohibition on governors serving consecutive terms has survived more than 160 years. Virginians did not directly elect their governor until 1851, according to the Encyclopedia of Virginia. Before that, the state constitution held the General Assembly responsible for choosing a governor.

Virginia’s anxiety over a powerful executive branch has roots in the American Revolution. The first Constitution of Virginia was enacted in conjunction with the Declaration of Independence. After declaring war on one king, Virginia was not eager to create another in the form of a powerful governor.

Matt Pinsker, a professor of constitutional law at Virginia Commonwealth University, said it all comes down to “tradition.” He said that although Virginia’s current system is “a unique anomaly among the states,” he believes it provides a well-functioning government.

Pinsker said that even if the amendment passes, it would likely make little difference in the day-to-day operations of Virginia government or the policies being pushed by the governor’s office.

That is because Virginia’s governors have typically used the position as a stepping stone for higher office, Pinsker said. Both of Virginia’s U.S. senators — Mark Warner and Tim Kaine — first served as governors.

“Our historical ties do have an impact,” said Robyn Diehl McDougle, director of the Center for Public Policy at VCU’s Wilder School of Government and Public Affairs.

McDougle said the General Assembly is reluctant to give up power to the executive branch, especially when partisan politics come into play.

“If I’m in the party opposite of who’s in the Governor’s Mansion, I’m less likely to vote for the possibility of their re-election,” she said.

Republicans control both the House and Senate, and Gov. Ralph Northam is a Democrat. Of the dozen legislators sponsoring HJ 608 and HJ 672, just one is a Republican: Del. Mark L. Cole of Fredericksburg. That could spell trouble for those measures to make it out of committee.

“I’m not saying it’s impossible,” McDougle said, “but I am saying it is an uphill battle.”