SUSSEX COUNTY, Va. - The owner of Three Brothers' Distillery in rural Sussex County calls a makeover from a Discovery Channel reality show a potential "million-dollar opportunity" for his "struggling" business.

With the click of ice cubes falling into a low ball glass on Friday, the scene wrapped up for the production company shooting an episode of the popular "Moonshiners Whiskey Business" series.

The premise behind the show, which features "Moonshiners" star Tim Smith, is giving a “makeover for a struggling distillery.”

Three Brothers' Owner Dave Reavis said he was excited when he was contacted by the show's producers about his distillery, which opened in 2017 and is located down a dirt road just across the Prince George County line in Sussex County.

“When an opportunity like this comes knocking at your door, to not grab hold of it with both hands and get as much out of it as you can, it’s absolutely a no-brainer,” Reavis explained to CBS 6.

Reavis added that he plans to debut an aged rye whiskey in May and that a rum is still in development.

"Moonshiners Whiskey Business" Director Ron Cornwall said Reavis was “a little off path, he lost his way a little bit and needed some help."

Reavis said the national TV exposure could open many doors for the distillery.

As with any reality TV show, there are big changes, which included transforming a well-worn 19th-century building.

Dino Lunsford is a local contractor hired by the show to build a unique bar.

“We had a few little tricks and details that we did in there,” Lunsford said.  “And I had some old wood that was perfect for what we did inside.”

With the potential for the distillery to grow and attract a national audience, it is also good news for the Sussex.

Cornwall is excited about what the episode, which is expected to be broadcast in April, will do for Reavis' business.

“I have no doubt that what we’ve done here will change Dave’s life," Cornwall said. "I’m sure of that.”

Right now the Tasting Room is open on Saturdays, but Reavis expects that will change once the episode featuring the distillery is broadcast. 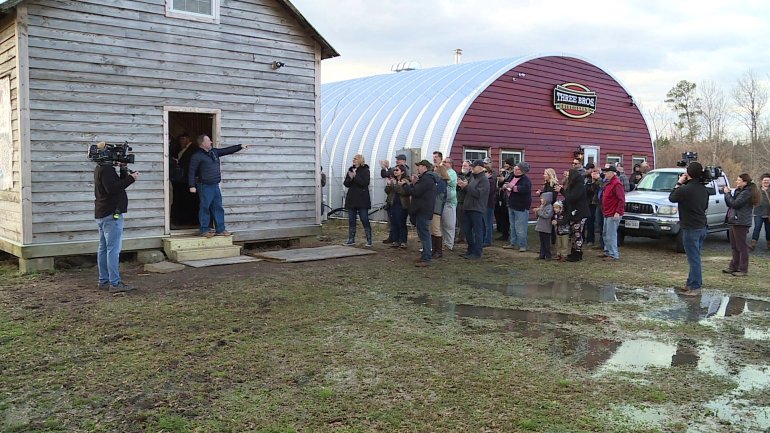