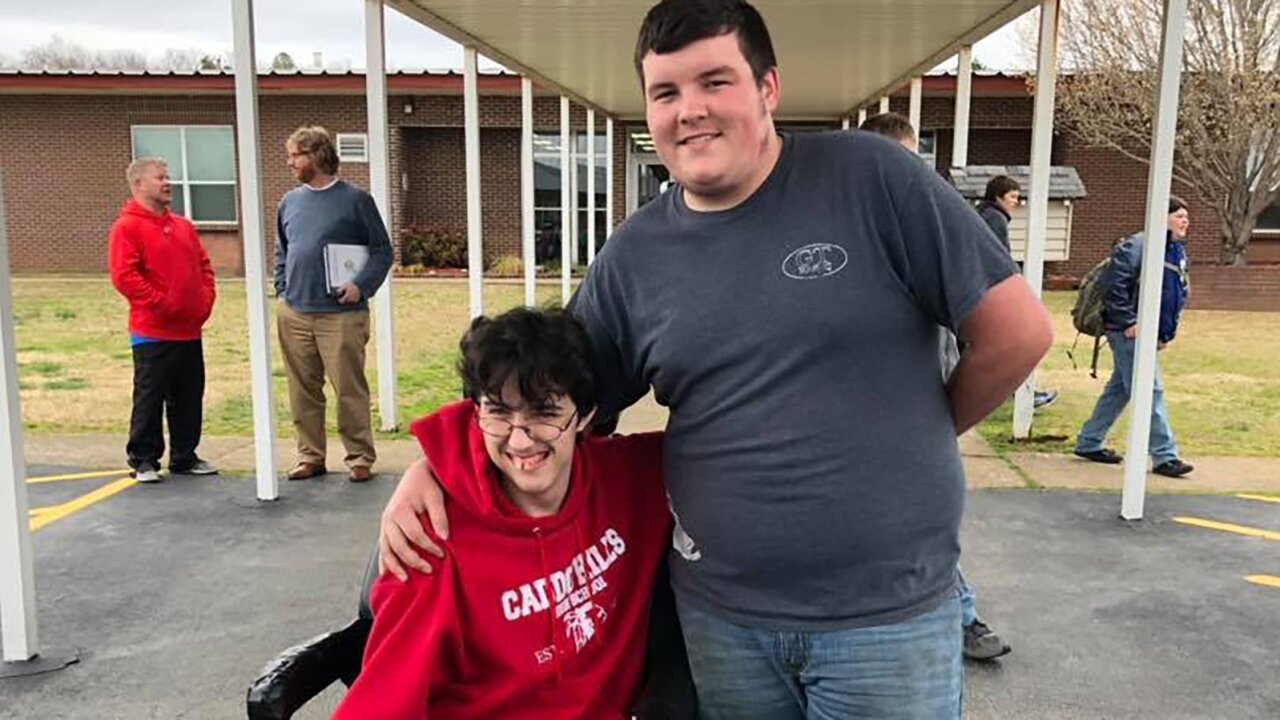 Two high school buds in Norman, Arkansas are reminding the world about the power of friendship and how it can change lives.

The story of friends Tanner Wilson and Brandon Qualls has gained national attention and warmed hearts across social media because of Tanner’s selfless act.

Brandon, who uses a wheelchair to get around, has been using a hand-push model for years.

The chair was becoming kind of a pain for Brandon as he had to push his way down the halls from class to class around Caddo Hills High School.

“My arms would get really tired,” Brandon told News9 TV.

Tanner presented the new wheelchair to Brandon in front of his classmates — which was a complete surprise for Brandon.

“They came in and my face just blew up,” Brandon told News9. “I was just crying everywhere. I was like, ‘Wow I can’t believe he did that for me.’

“It’s been my dream to just have one of these,” Brandon said. “And my dream came true.”

Related: After his best friend died, a 12-year-old Michigan boy raised $2,500 to pay for the headstone

‘He’s just always been there for me’

When you watch Brandon and Tanner fist bump as they walk down the halls of Caddo High, it’s obvious how tight these friends are.

But Tanner’s gift clearly went above and beyond the norm.

“He’s just been a really good friend and I wanted to do him a favor,” Tanner said. “I just felt like I needed to do it. … Brandon, he’s just always been there for me.”

Carmack told CNN that her son Tanner has been uplifted by all the media attention, and smiles when he reads messages people have posted online about his good deed.

“They both deserve the attention because they’re both great and wonderful kids,” Carmack said.

Is she surprised at her son’s behavior? Not at all. “That’s him. He’s always been about everybody else and not himself,” she said. “We let him know, you get nowhere being mean.”

She said Tanner has “had some bad experiences over the last year, so him being able to help somebody else has really brought him out — being able to know that he made a difference. And I can see a difference in him — like wanting to get out and do more.

Tanner and Brandon have been friends for years, Carmack said. “They talk about cars a lot and trucks and that kind of stuff. I’m really proud of both of them.”

Carmack said she has a wish for Brandon: a vehicle that can transport his new wheels. “His parents don’t have a way to get his wheelchair home,” she said. “It is stuck at school right now. Their vehicle is not wheelchair accessible.”

Tricked out with flames

Ginger Wray, one of Brandon’s teachers, told KTHV she collaborated on the good deed by tricking out the chair with orange flames on the fenders and his last name “Qualls” emblazoned on the back.

Teacher Kathy Baker told KARK.com that this sort of behavior isn’t new for Tanner. “He loves to do for others,” Baker said. “He is just a great young man.”

Tanner simply wishes “people would care more about others, than just themselves.”

His selfless act will have longterm benefits.

“It’s awesome,” Brandon told News9, adding that he’s still getting used to driving his new wheels. “I may hit a few doors, but it’s worth it.”

Tanner’s gift has also created a stir among his other classmates.