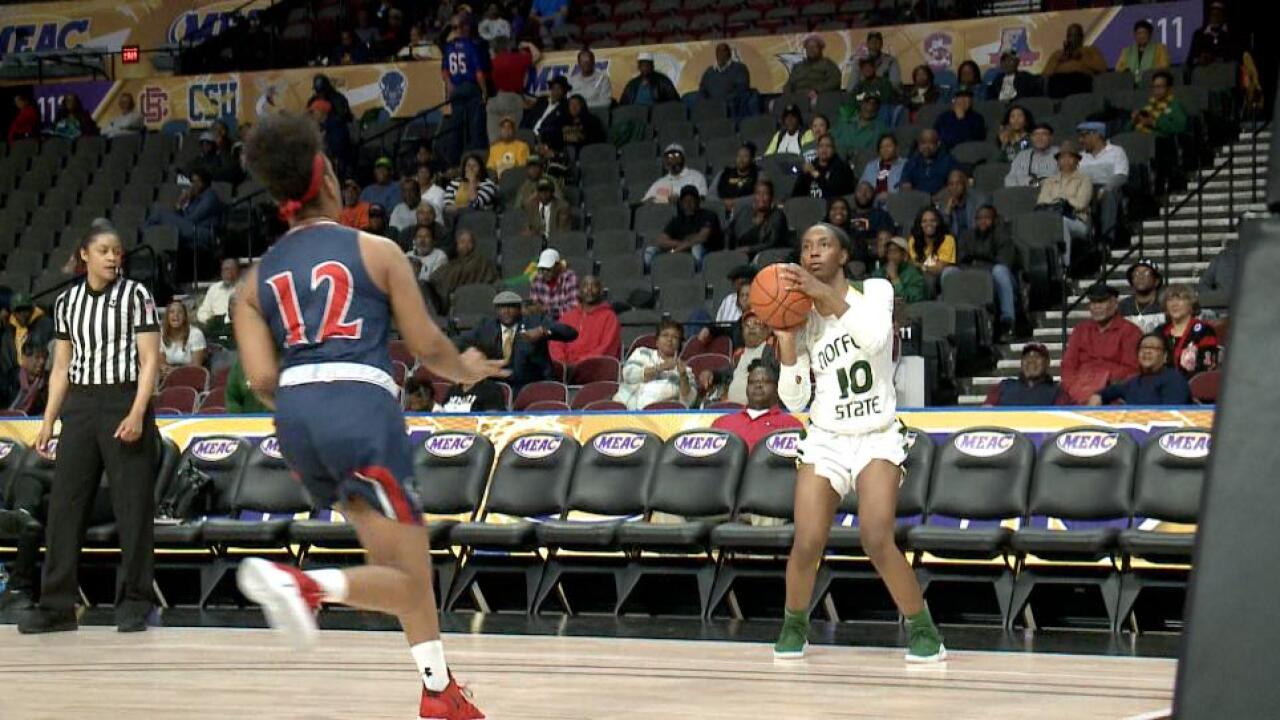 NORFOLK, Va. (NSUSpartans.com) –  A 15-0 run spanning five minutes and 25 seconds of the fourth quarter broke open Norfolk State’s MEAC Tournament quarterfinal matchup against Howard, propelling the Spartans (16-14) into the semifinals by way of a 72-51 victory over the Bison (18-13) on Thursday inside Scope Arena.

Norfolk State led for the final 25:04 of the game but struggled to put HU away before its fourth-quarter run. Leading 54-47 with 8:33 left in the game, the Spartans held the Bison without a point until the 2:52 mark of the fourth. During that time, NSU’s lead ballooned to 69-47, and the Spartans were well on their way to their fifth MEAC semifinal appearance of all time and just their second in the last 14 years.

The final basket of the run encapsulated much of the game as La’Deja James stole the ball from the Bison then found Dana Echols on the break for a layup. For the game, NSU logged 12 steals (three from James), scored 21 points off 19 Bison turnovers and doubled up Howard in the open court, 12-6.

James made the most of her MEAC Tournament debut, scoring a game-high 18 points on 7-of-13 shooting with four rebounds and three steals in 35 minutes of action. Echols was ultra-efficient in Thursday’s game, scoring 10 points on just five shot attempts with a pair of 3-pointers and four rebounds in her first double-digit scoring outing in 18 contests.

Raven Russell joined the double-digit point club for NSU with 11 to go alongside four rebounds, four assists and a game-best four steals.

For the second time in just one week, the Spartans clamped down on the Bison from behind the 3-point arc. NSU held HU to 28.2-percent shooting in its regular season finale last Thursday and one-upped itself in this game – forcing misses on 20 of Howard’s 23 long-range shots for a 3-point shooting percentage of 13.0.

Jayla Thornton was responsible for two of the Bison’s three treys and finished second on her team in scoring with 12 points but needed 12 shots to do so.

Howard’s trio of All-MEAC guards – Thornton, Sarah Edmond and Ayonna Williams – combined for nearly half of the Bison scoring output but shot a combined 9-of-31 (29 percent) from the floor and accounted for 11 turnovers.

A 6-0 run to close out the first quarter saw the Bison lead 15-10 after a slow-developing opening 10 minutes. Both sides combined to shoot 8-of-30 in the first period and did not hit from 3-point range on 12 attempts.

Krislyn Marsh scored four of Howard’s final six points in the quarter and went on to post a team-high 16 points on 5-of-10 shooting with three rebounds. For the game, the freshman forward made 12 trips to the foul line but converted only six of her free throws.

A major piece of Howard’s potent attack, the Bison struggled mightily as a team at the charity stripe, where they went 12-of-21 (57.1 percent). Norfolk State made 32 trips to the line on Thursday and made 24 foul shots.

Norfolk State found its groove in the second quarter, shooting 61.5 percent from the field and outscoring the Bison 24-13 to take a 34-28 lead into the break.

James and Russell were the main drivers of NSU’s success in the second. The duo of guards combined for 15 points and each was 3-for-4 from the field and 1-for-1 from the 3-point arc.

The Spartans opened the period with five unanswered to tie the game, but Thornton had an answer with a 3-pointer to make the score 18-15 with 8:22 to play in the half. Howard scored just three more points, all from Marsh, over the next five minutes as the Spartans built a three-point advantage at 24-21.

Russell and Williams traded baskets before Thornton’s only other trey of the afternoon restored Howard’s lead at 28-26 with 2:07 left to go. The Bison would not score again for the remainder of the half as 3-pointers from Russell and James and two free throws from Danyael Goodhope constituted an 8-0 half-ending run for Norfolk State.

Howard shot below 30 percent in the second half and made just one 3-pointer as the Spartans won the final two periods by a combined 38-23 margin.

Norfolk State shot over 50 percent from the field in the third quarter, but eight turnovers in the period kept HU in the game. The Spartans struck early with an Echols 3-pointer just 20 seconds into the half but did not score again in nearly four minutes. NSU’s defense stepped up in a big way during the prolonged dry spell – holding the Bison to only two points during that span.

A personal 5-0 run from Marsh drew the Bison to within four points, 39-35, with 4:01 remaining in the quarter. After two free throws from De’Janaire Deas, Howard tacked on a 3-pointer and a foul shot to make it a two-point ballgame with 3:20 to play.

Khadedra Croker restored order with a fastbreak layup nine seconds later and was fouled in the act of shooting. While she missed the free throw, the excitement of the play allowed the Spartans to close out the quarter on a 10-4 run.

The bottom fell out of Howard’s offensive attack in the fourth, allowing the Spartans to break away. The Bison shot just 26.7 percent in the period, failed to make a 3-pointer of foul shot and gave the ball away six times. Conversely, NSU saw out the game with 9-of-11 shooting at the foul line and only three fourth-quarter turnovers.

Deas added eight points off the bench and was responsible for both of the Spartans’ two blocked shots.

A short turnaround awaits NSU as it faces top-seeded North Carolina A&T in the semifinals on Friday at noon. The Spartans are vying for their first trip to the tournament championship game since 2005, when they lost to Coppin State, 67-43.