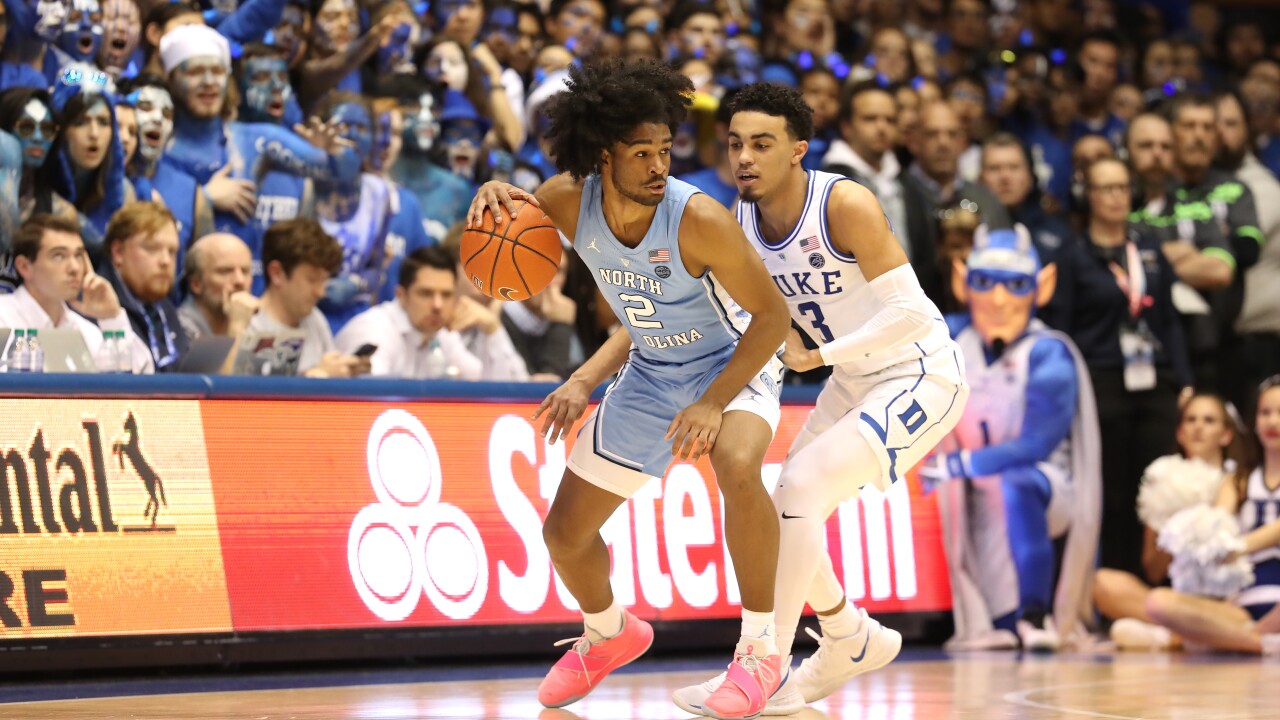 ACC champion Duke (29-5) and regular-season co-champions Virginia (29-3) and North Carolina (27-6) were all awarded No. 1 seeds when the 68-team field was unveiled Sunday evening, marking just the second time one conference has landed three spots atop the regional brackets. The Big East earned three No. 1 seeds in 2009.

North Carolina will be a No. 1 seed for an NCAA-leading 17th time. The No. 1 seed is the 13th for Duke and the seventh for Virginia. The ACC’s 40 all-time No. 1 regional seeds leads all conferences.

This marks the sixth time the ACC has placed at least seven teams in the NCAA Tournament field. Nine from the conference earned bids in both 2017 and 2018. Seven ACC teams made the field in 2007, 2009 and 2016.

As the top overall seed, Duke landed in the East Region and opens play on Friday in Columbia, South Carolina, against the winner of the “first four” matchup between North Dakota State (18-15) and North Carolina Central (18-15). The Blue Devils are playing in the NCAA Tournament for the 24th consecutive season and 43rd year overall. Duke is 111-37 in the tournament with NCAA Championships in 1991, 1992, 2001, 2010 and 2015. Head coach Mike Krzyzewski is the NCAA’s all-time leader in tournament victories, posting a 94-29 record in his 34 previous NCAA appearances with the Blue Devils.

Virginia is the No. 1 seed in the South Region for the second consecutive year and will open play in Columbia on Friday against No. 16 Gardner-Webb (23-11). The Cavaliers will be making their 23rd NCAA Tournament appearance, their school-record sixth straight and their seventh in the last eight years under current head coach Tony Bennett. Virginia is 29-22 all-time in the NCAAs, including Final Four appearances in 1981 and 1984. The No. 1 seed marks the fourth in the past six seasons for the Cavaliers.

ACC Tournament runner-up Florida State (27-7) is back in the NCAA Tournament field for a third consecutive year. The Seminoles are seeded No. 4 in the West will take on No. 13 seed Vermont (27-6) on Friday in Hartford, Connecticut. Florida State is 19-16 in 16 previous NCAA appearances and will be making its seventh trip to tournament under current head coach Leonard Hamilton.

Virginia Tech drew the No. 4 seed in East Region and faces St. Louis (23-12) on Friday in San Jose, California. The Hokies will be making their 11th all-time NCAA Tournament appearance and their third straight under current head coach Buzz Williams. Virginia Tech owns an all-time NCAA mark of 6-10.

Louisville will make its 39th appearance in the NCAA Tournament, facing No. 10 seed Minnesota (21-13) in an East Region first round contest on Thursday, March 21, at Wells Fargo Arena in Des Moines, Iowa.  A No. 7 seed, Louisville has achieved its 20-13 record while facing the nation’s third-toughest schedule.

West Region No. 8 seed Syracuse will be appearing in the NCAA Tournament field for the 40th time and for the 34th under current head coach Jim Boeheim. The Orange will face No. 9 seed Baylor (19-13) on Thursday in Salt Lake City, Utah. Syracuse owns a 68-39 all-time mark in the NCAA Tournament, including the 2003 national title.

The ACC is the winningest conference in NCAA Tournament history with a .657 winning percentage and is the only conference in the nation that has not had a losing record in NCAA Tournament play since 1987. League teams have combined to win a record 59 NCAA Tournament games the past four years while placing four teams among the Final Four and claiming two national titles during that span (Duke in 2015 and North Carolina in 2017).