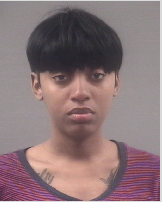 PORTSMOUTH, Va. – Detectives with the Portsmouth Police Department’s Major Crimes Unit (MCU) are looking for a person of interest in connection with a fatal shooting at a Portsmouth bar that left a man dead earlier this month.

Authorities are trying to contact Craiesha King in reference to the shooting at the Cock Island Bar and Grill on March 4.

Police responded to the bar in the 600 block of Airline Boulevard shortly after 1 a.m. that day, arriving to find the victim, 34-year-old Jermaine Marcus Iriarte of Portsmouth, suffering from a gunshot wound to his upper body. Iriarte was pronounced dead at the scene.

Police said the shots were initially fired outside the bar and that Iriarte stumbled inside and collapsed.

On March 7, 20-year-old Nicholas Kyle Moffitt was arrested and charged with first-degree murder and use of a firearm in the commission of a felony.