PORTSMOUTH, Va. - Former Police Chief Tonya Chapman says she was forced out of office by certain members of the Portsmouth Police Department and added that she believes race played a factor.

In a multi-page statement to the media, Chapman laid out what she believed to be a reasoning for why she was ultimately asked to resign, pointing to continuous issues with some in her department that did not want her as chief of police and regularly looked into establishing a "no confidence" vote against her.

Chapman added in her statement that she was caught off guard by City Manager L. Pettis Patton asking her to resign. She added that she also was given two months severance pay and thinks she should get six months and a good recommendation from the Portsmouth Police Department.

"I can assure you that I did not 'quit' on the citizens of Portsmouth. My mother did not raise me to be a quitter. She raised me to be a strong woman. As such, my resignation was not tendered under my own volition. This was a forced resignation and our City Manager was the conduit," said Chapman in part of her statement.

While the 29-year law enforcement veteran did not directly single out one person or a certain group of people for using race as a reason for not wanting her as chief of police, Chapman did bring up that she was told the only other chief on which they have generated a vote of “no confidence” was a former black male chief.

Chapman also said she was told by multiple people within the department that the previous white chief of police for the city came in and "turned this department upside down to include dismantling units and transferring personnel due to various allegations and they did not even attempt a vote of “no confidence” on him."

"Some, quite frankly, did not like taking direction from an African American female," added Chapman, who said that there were officers in the department that did not like her style of leadership and did not want her to hold them accountable for their actions.

Chapman also eluded to incidents that were "so inflammatory" she did not want to make them public due to a "concern of public safety."

Chapman became Virginia’s first African American female chief of a municipal police department when she took on the position in February 2016.

In her statement, Chapman spoke about the things she did to help promote a positive image of the Portsmouth Police Department following what was described to her as external strife that existed between the community and the police department as a result of several officer-involved shootings.

Critics of the former chief said police turnover is too high - along with violence throughout the city - and said morale is low among those in the police department.

News 3 reached out to multiple members of Portsmouth City Council for comment, but they cited city code as a reason why they could not speak on personnel issues.

Monday evening, leaders with the Portsmouth NAACP held a press conference regarding Chapman's resignation, where they had some very serious accusations against some of the city's leadership.

"[A] modern day lynching - that’s what happened here with Tonya Chapman," said James Boyd, Portsmouth NAACP President. "The electric current of systemic racism and oppression has shocked our city once."

Boyd believes black leaders are pushed out of office and said claims there is racism throughout the City of Portsmouth.

The NAACP encouraged citizens to attend Tuesday's city council meeting, which lasted two and a half hours. Several members of the NAACP were there, as well as members from the Delta Sigma Theta sorority.

The only council person who spoke was Shannon Glover, who said he didn't think the situation was handled properly and that he was embarrassed that the city was being put into the limelight once again for something negative.

Packed house in @cityofPortsVA. @NAACP in Portsmouth encouraged public to attend council meeting. They said they want answers from city leaders about the resignation of former police chief. She says she was forced out and thinks race was a factor https://t.co/2oKNhHC8ZO pic.twitter.com/yVQzxmTGWW

News 3 spoke to Senator Louise Lucas moments after the meeting ended. She expressed outrage at the way the situation has been handled and said there is a lot of blame to go around.

"Dr. Patton didn’t come to this decision on her own; she was pushed by people to do it and for her to allow - I expected her to have more integrity than that," Lucas said. "My principles come before anything else. I would not have done it, but she allowed herself to be used because she didn’t have the backbone to do something like that on her own. She was pushed. I believe the mayor was involved in it, I believe other members of the city council were involved in it and I damn sure believe the police department was involved in it."

Tuesday, the Portsmouth Fraternal Order of Police Gosport Lodge #20 said while "at no time" did they call for a vote of "no confidence" against Chapman, they support the city manager's decision to appoint Green at interim chief:

The Portsmouth Fraternal Order of Police Gosport Lodge #20 would like to take this opportunity to correct recent statements and accusations that were made over the past few days. At no time did the Portsmouth FOP call for or attempt to call for a vote of no confidence of Former Chief Chapman.

The Portsmouth FOP was willing and wanted to establish a good working relationship with Chief Chapman for the benefit of the department and will continue on that path with Chief Greene.

The Portsmouth FOP supports the recent decision made by the City Manager to appoint Angela Greene to the position of Interim Chief and we will stand behind her in this endeavor. We have already spoken with Chief Greene and are looking forward to building a positive relationship with her. We will continue to support the goals of the City of Portsmouth and will strive for excellence in the service we provide to the citizens of this city.

Some are asking for an investigation into the situation. As of Tuesday, we have not heard from the city manager. 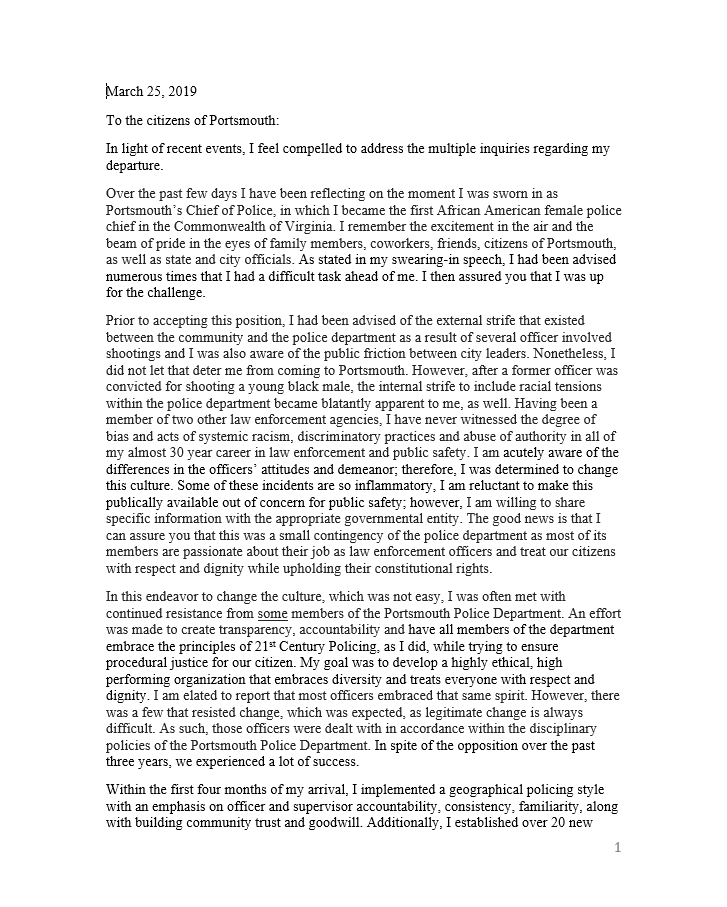