A federal bump stock ban starts today. Here’s what that means for owners 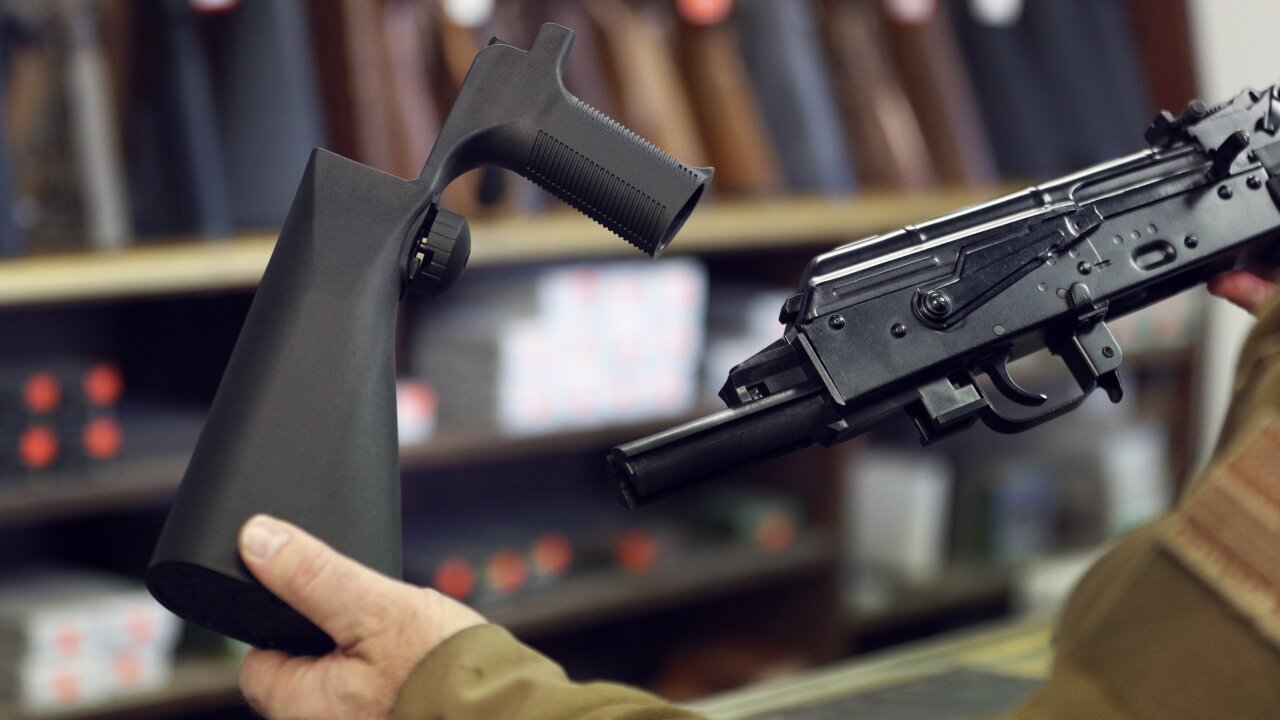 Unless a court intervenes, a federal ban on bump stocks — attachments that essentially allow shooters to fire semiautomatic rifles continuously with one pull of the trigger — will start March 26, 2019.

Unless a court intervenes, a federal ban on bump stocks — attachments that essentially allow shooters to fire semiautomatic rifles continuously with one pull of the trigger — will start Tuesday.

Unless a court intervenes, a federal ban on bump stocks — attachments that essentially allow shooters to fire semiautomatic rifles continuously with one pull of the trigger — will start March 26, 2019.

Owners were given 90 days to turn in or destroy them, and that period ends Tuesday.

Bump stocks came under scrutiny after the October 2017 massacre in Las Vegas. Stephen Paddock opened fire from his hotel suite onto outdoor concertgoers with rifles fitted with bump stocks, killing 58 people and wounding hundreds of others.

The Supreme Court on Monday night received at least two emergency appeals asking the justices to put the bump stock ban on hold. There was no immediate decision.

Here’s what to know about bump stocks, the ban and what owners need to do:

What bump stocks are

With a semiautomatic weapon, one round is fired for each single pull of the trigger, and the weapon reloads itself as long as ammunition remains.

With a fully automatic weapon, once the trigger is pulled and held, the weapon will keep firing until the ammunition is gone or the trigger is released.

Bump stocks are meant to replace the standard stock and grip of a semiautomatic rifle. They attach to a rifle’s receiver, or frame.

The bump stock uses recoil effects to bounce the rifle off the shooter’s shoulder and bump the trigger back into the trigger finger. This speeds up what the rate of fire would have been without the bump stock. It effectively mimics fully automatic gunfire.

As the Justice Department now puts it: Bump stocks allow “the trigger to reset and continue firing without additional physical manipulation of the trigger by the shooter.”

But back in 2010, the federal Bureau of Alcohol, Tobacco, Firearms and Explosives determined that bump stocks were merely accessories, or firearms parts — and therefore not regulated as a firearm.

How the ban came about

But some lawmakers and some gun lobbyists resisted, making new legislation unlikely. That made a regulatory change the only realistic path to accomplishing the President’s goal.

At Trump’s direction, the Justice Department in March 2018 proposed a rule clarifying that bump stocks were not merely parts, but instead were “machine guns” — what the federal government calls fully automatic weapons — as defined by existing law.

Why? Because “such devices allow a shooter of a semiautomatic firearm to initiate a continuous firing cycle with a single pull of the trigger,” similar to automatic rifles, the Justice Department said.

Defining bump stocks as machine guns effectively bans them. Civilian possession of fully automatic weapons was outlawed in 1986 except for those already lawfully in people’s ownership.

After considering public comments about the proposal, the department finalized and published the rule on December 26.

And there is no grandfather clause for bump stocks, the new rule says, because they weren’t manufactured until well after the 1986 law went into effect.

Some gun-owner advocacy groups sued the Justice Department, asking a federal court to prevent the ban. They argued, in part, that the Justice Department violated procedural requirements. They also argued that the official who signed the rule, Matthew Whitaker, who then was the acting US attorney general, did not have authority to do so.

A judge rejected that challenge in February.

In one case out of the District of Columbia called Guedes v. Bureau of Alcohol, Tobacco, Firearms and Explosives, two people who own bump stocks and three groups say the DC Court of Appeals had yet to rule on their appeal. They are asking the justices to put any ruling on hold for 48 hours after it comes down so the groups can file a timely appeal with the Supreme Court.

In another case out of the 6th Circuit, Gun Owners of America and other individuals are asking for a stay, arguing the final rule “reverses well over a decade of consistent ATF classification of bump stocks as unregulated firearm accessories.”

Who the ban affects

Most immediately, people who own, make or sell them.

The Justice Department says as many as seven US bump stock manufacturers have operated since 2010, but only one remained by late 2018. Two businesses stopped making them after the rule was proposed in March 2018, “due to their inability to obtain liability insurance,” the department says.

Slide Fire Solutions, the Texas company that invented bump stocks, said it shut down its online store in June.

The Justice Department says it doesn’t know how many people own bump stocks, but it estimates that up to 520,000 devices were sold.

What owners need to do

The Justice Department says owners should do one of two things by Tuesday: Destroy the devices, or drop them off at an ATF field office.

How do you destroy a bump stock? The ATF suggests cutting, crushing, melting or shredding it — and it offers an online how-to guide.

Washington state offered a buyback alternative for its residents. On Monday, people can surrender up to five bump stocks at Washington State Patrol offices in exchange for $150 per device.