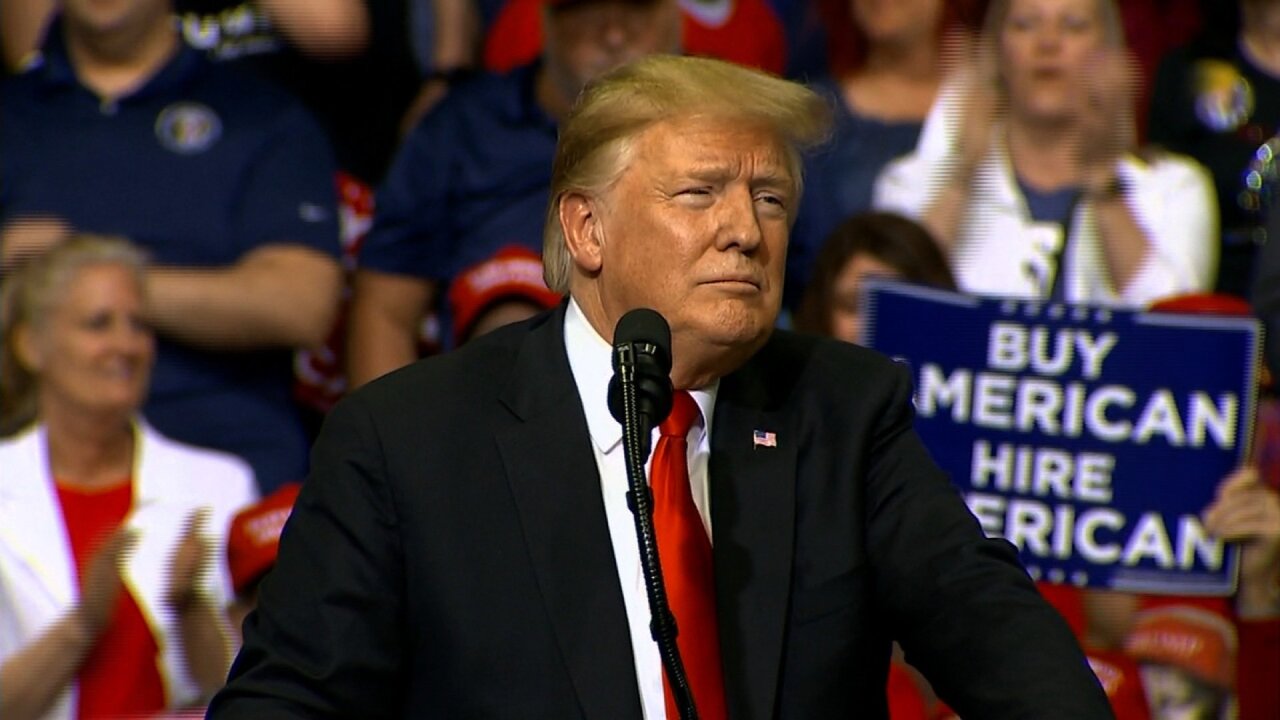 President Donald Trump touted the end of Robert Mueller’s investigation during his first appearance before supporters since its completion during a rally in Grand Rapids, Michigan, on March 28, 2019.

President Donald Trump touted the end of Robert Mueller’s investigation during his about 90-minute long speech, his first appearance before supporters since its completion during a rally in Grand Rapids, Michigan, Thursday night.

The raucous rally follows a chaotic week in Washington, precipitated by Attorney General Bill Barr’s letter to Congress on the special counsel’s report. Trump and the White House have touted Barr’s summary as a political victory, claiming that the report exonerated him entirely.

“The collusion delusion is over. The special counsel completed its report and found no collusion and no obstruction. Coulda told you that two and a half years ago very easily,” Trump said, calling the report’s findings “total exoneration” and “complete vindication.”

Trump is correct that Barr’s letter to Congress said Mueller’s team of investigators “did not establish that members of the Trump campaign conspired or coordinated with the Russian government in its election interference activities.”

President Donald Trump touted the end of Robert Mueller’s investigation during his first appearance before supporters since its completion during a rally in Grand Rapids, Michigan, on March 28, 2019.

However, Trump falsely claimed that the report said there was no obstruction. Barr’s letter, directly quoting the Mueller report, clearly states that “while this report does not conclude that the President committed a crime, it also does not exonerate him” on questions of obstruction.

Mueller said he had thoroughly investigated the obstruction question, though he didn’t interview Trump in person and the written questions he submitted to the President did not address obstruction.

Barr and Deputy Attorney General Rod Rosenstein chose not to prosecute. They decided that they couldn’t press a case against Trump because they determined his actions did not meet the standards for prosecuting such a case.

Trump also lambasted Democrats and the media for the investigation Thursday.

“You know it’s interesting, Robert Mueller was a god to the Democrats, was a god to them until he said there was no collusion. They don’t like him so much right now. The crazy attempt by the Democrat Party and the fake news media right back there and the deep state to overturn the results of the 2016 election have failed,” Trump said, later referring to Democrats as “mega losers.”

He called the special counsel’s investigation into interference in the 2016 election a “sinister effort to undermine our historic election victory and to sabotage the will of the American people.”

Related: Mueller investigation: Trump administration did not conspire with Russia

The President also addressed themes familiar to his rally audiences — the economy, health care and immigration.

He touted jobs several auto companies are bringing to the United States and told rallygoers in the heart of auto country that he speaking with General Motors and the United Automobile Workers union to re-open a plant in Lordstown, Ohio — the closure of which led to a very public spat between the groups.

On Monday night, the Justice Department reversed its approach on court action on the Affordable Care Act, saying in a filing with a federal appeals court that former President Barack Obama’s signature domestic legislation should be entirely struck down.

Though Republicans haven’t presented a clear, viable alternative to Obamacare, Trump has this week touted his administration’s push to make health care the center of the national political debate.

“We’re going to get rid of Obamacare. And I said the other day, the Republican Party will become the party of great health care. It’s good. It’s important,” Trump said at his Grand Rapids rally.

The President also spoke at length on immigration, at one point mocking the legitimacy of the claims of asylum seekers.

“You have people coming, you know they’re all met by the lawyers … And they come out, and they’re met by the lawyers, and they say, ‘Say the following phrase: I am very afraid for my life. I am afraid for my life.’ OK,” Trump said. “And then I look at the guy. He looks like he just got out of the ring. He’s a heavyweight champion of the world. It’s a big fat con job.”

Trump also appeared to reverse course on funding the cleanup of the Great Lakes.

“We have some breaking news. I support the Great Lakes. They are beautiful they are big very deep. Record deepness, right? I am going to get fuller funding of 300 million dollars for the restoration of the Great Lakes, which they’ve been trying to get for over 30 years,” he said.

Two weeks ago Ohio lawmakers complained that the administration was actually gutting federal funding for cleanup of toxic pollutants and removal of invasive species in the Great Lakes region, according to the Toledo Blade.

Trump also said his administration is “very close to getting started on the Soo Locks,” which he said, “people have wanted to build for a very, very long time. ”

The project, which would add a second lock and allow larger ships to access the Great Lakes, is expected to bring much needed construction jobs to the Upper Peninsula region.