NORFOLK, Va. - William & Mary football player Nate Evans was doing a "drug transaction" with Kri'Shawn Beamon on the night Evans was killed, according to a search warrant filed in Chesapeake Circuit Court.

Beamon is now charged with second-degree murder and is accused of shooting and killing Evans last week near 43rd Street and Colley Avenue in Norfolk. No other information about the "drug transaction" is detailed in the search warrant.

Investigators say they obtained video showing a white Ford Fusion leaving the scene of the shooting and traced the car back to Beamon. In addition, Beamon's cell phone was found at the scene, according to the search warrant.

Investigators also found the driver's license of another man and determined that the man and Beamon called each other 10 times in the two days leading up to the shooting. 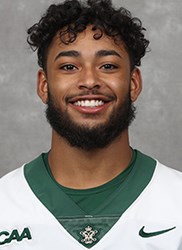 The investigation led detectives to an apartment in Chesapeake, where they thought they would find Beamon. The search warrant says nothing at the apartment was seized.

Beamon was arrested at his house on Coleshill Lane on Monday. In addition to second-degree murder, he is also charged with robbery.

Evans was a sophomore running back and dreamed of one day playing in the NFL. His loved ones have set up a GoFundMe to help with expenses.

Detectives are investigating this as an isolated incident, and have not commented on the search warrant.

Beamon is currently being held in the Norfolk City Jail without bond.

During the course of the investigation, police also arrested another man named Jerry Spady and charged him with concealing a weapon. He has been released from jail on bond and at this time faces no additional charges, according to police.

If you have any information about this incident, call the Norfolk Crime Line at Line 1-888-LOCK-U-UP or submit a tip through the P3Tips mobile app.