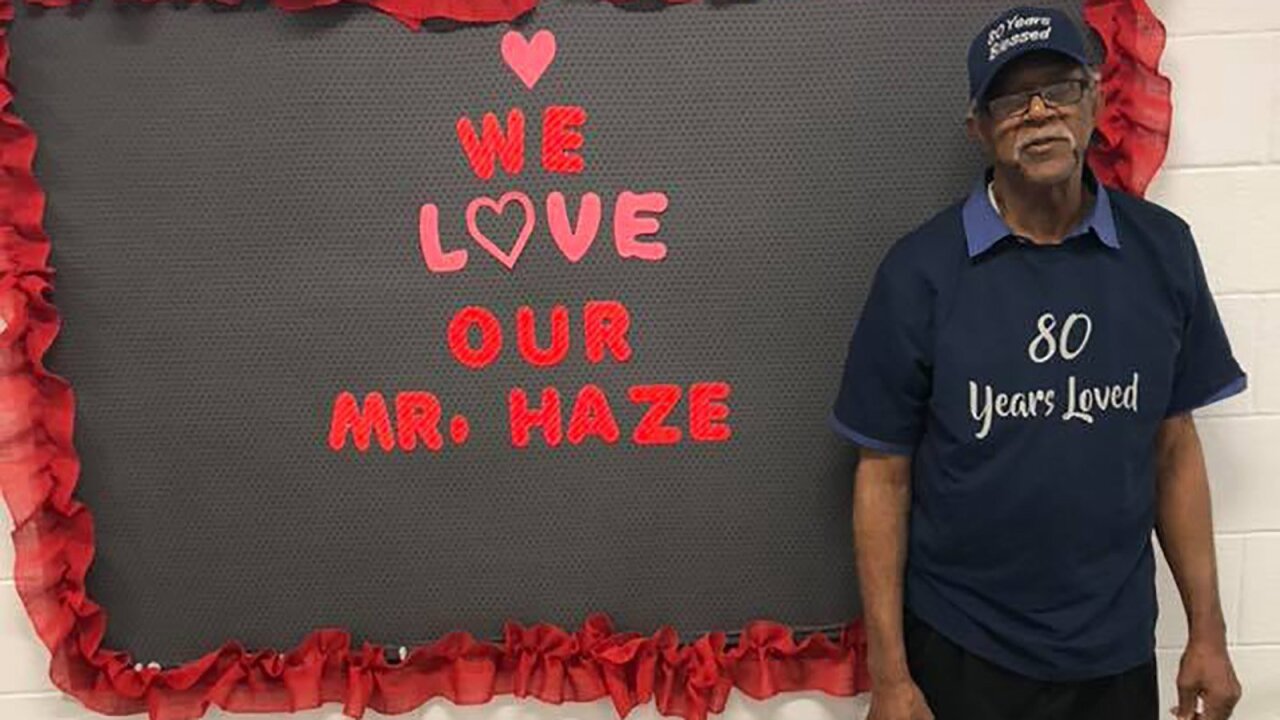 So students and teachers at Pike County Elementary School in Zebulon decided to do something extra special last week to surprise Mabry, or “Mr. Haze” as he’s known at the school, for his 80th birthday.

They led him on a parade through the school and the more than 750 students, teachers and staff members lined the halls chanting “Mr. Haze! Mr. Haze!”

“I feel great. You know, all them little kids they call my name, they’re giving me cards, they’re running up and hugging me. … It’s something else, you know,” Mabry said. “It’s a lifetime experience.”

Reading teacher Lori Gilreath said they worked on the celebration for weeks and that keeping the plans under wraps was a challenge since Mabry works from 6:30 a.m. to 5:30 p.m.

She’s worked with Mabry for 10 years and says he’s like a part of her family.

“He’s just very caring. He’s just so much more than just a staff member,” she said. “He doesn’t know how special he is.”

On the day before the celebration, they turned Gilreath’s classroom into a secret art center to finish the preparations. Mabry likes to poke his head into classrooms to say “hi” to the children, so Gilreath said they set up dividers in the back of the room to hide their work.

Mabry said he noticed her moving some tables around in the lunchroom, but he didn’t give it much thought.

Then, at 5:35 on Tuesday evening, Mabry finally went home.

“I watched his car pull out of the parking lot,” Gilreath said.

Once the coast was clear, volunteers got to work. They made a “birthday throne” for him on the school’s stage and lined the walls with photos of Mabry with the kids and other decorations with the theme “80 years loved, 80 years blessed.”

The students also listed 80 reasons why they love Mr. Haze. Gilreath said he always takes time to talk to the students or give them a hug or pat on the back if they need it.

“A kid knows if they’re loved, and they know that Mr. Haze loves them,” she said.

Mabry was the first person in the building on Wednesday morning and saw all the decorations when he turned on the lights.

Gilreath tried to beat him to the school, but Mabry was already vacuuming away when she got there at 6:45.

“Once the kids started arriving, it was party central,” Gilreath said.

The baskets they’d gotten to hold all the cards were quickly overflowing.

Mabry used a large trash bag to take it all home and he said it was half full. He said teachers and students also brought him cookies and other birthday treats.

They drove everything to his car in the school’s golf cart.

“It will take weeks for him to read them all,” Gilreath said.

Mabry said he could retire, but he doesn’t want to. He said he likes to keep busy and loves the kids.