Hundreds of old Sears stores are empty. Amazon and Whole Foods might move in 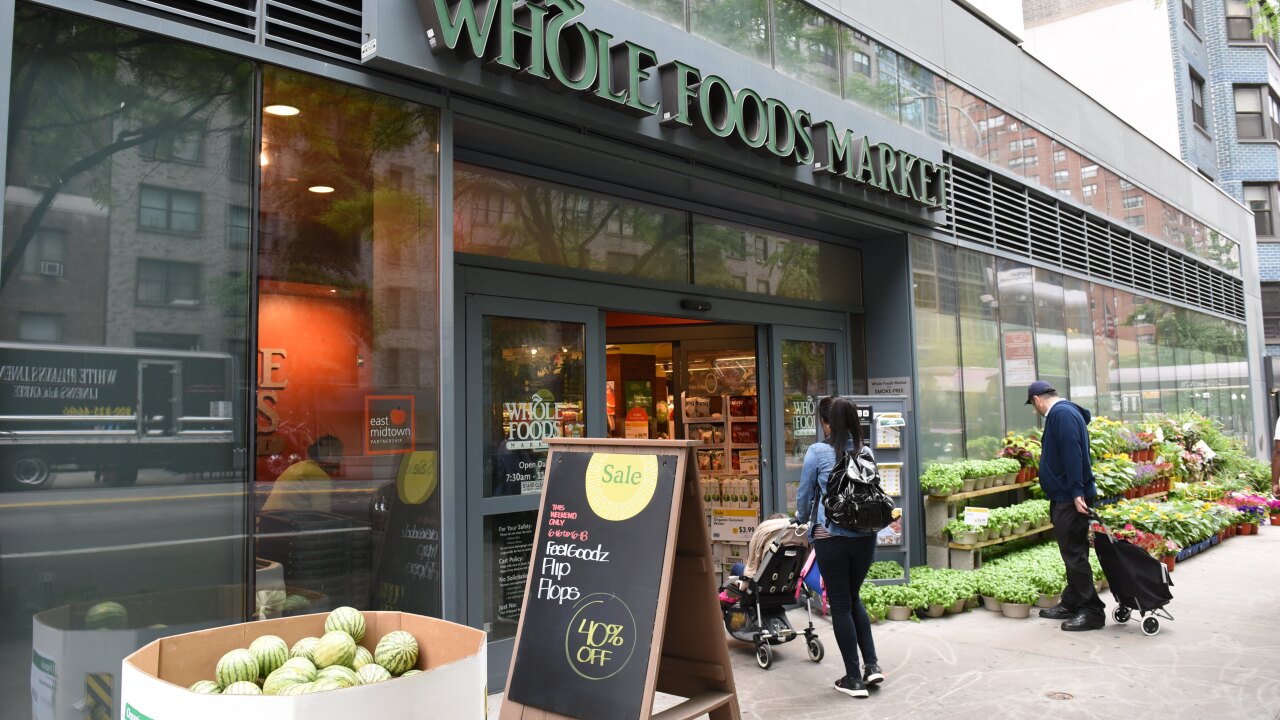 The Whole Foods Market in Midtown New York is seen on June 16, 2017. Amazon is once again shaking up the retail sector, with the announcement Friday it will acquire upscale US grocer Whole Foods Market, known for its pricey organic options, in a deal that underscores the online giant’s growing influence in the economy. / AFP PHOTO / TIMOTHY A. CLARY (Photo credit should read TIMOTHY A. CLARY/AFP/Getty Images)

Don’t be surprised if Whole Foods or another Amazon grocery chain pops up where an old Sears used to be.

Hundreds of former Sears and Kmart locations around the country could be attractive fits for Whole Foods or a potential new Amazon supermarket concept, analysts at BMO Capital Markets said in a research report this week.

Moving into former Sears or Kmart sites may be the quickest and the cheapest way for Whole Foods or a different Amazon concept to grow, the analysts said. Amazon reportedly wants to launch a separate line of lower-priced supermarkets than Whole Foods.

Sears, which bought Kmart in 2004, filed for bankruptcy last year. It has already closed around 170 stores in recent years and plans to close another 260. Sears said in bankruptcy court that it expects to raise at least $650 million from real estate sales in the next three years.

Despite Sears’ struggles, hundreds of its vacant or soon-to-close stores are located in appealing neighborhoods for retailers, according to BMO analysts. Amazon reportedly has been eyeing former Sears and Kmart sites for new Whole Foods’ stores.

The analysts identified 110 Sears and Kmart locations without a Whole Foods within three miles that they believe would fit the upscale chain’s demographic criteria for new stores, particularly in suburban areas.

Whole Foods targets wealthier shoppers in urban areas. Its shoppers have a median income of around $72,000, compared to $55,000 at Walmart, according to BMO Capital Markets.

“There are plenty of Sears/Kmart boxes surrounded by high quality demographics,” BMO analysts said in the report.

The analysts also found more than 320 Sears and Kmart spaces with surrounding demographics that a cheaper grocer, such as a new Amazon concept, might find attractive.

So instead of buying the properties from Sears, Whole Foods or a new Amazon concept would probably sign a lease as an anchor tenant for landlords that want to rebuild the sites and rent out part of the space to healthy retailers, said BMO analyst Brandon Cheatham.

The Whole Foods Market in Midtown New York is seen on June 16, 2017.
Amazon is once again shaking up the retail sector, with the announcement Friday it will acquire upscale US grocer Whole Foods Market, known for its pricey organic options, in a deal that underscores the online giant’s growing influence in the economy. / AFP PHOTO / TIMOTHY A. CLARY (Photo credit should read TIMOTHY A. CLARY/AFP/Getty Images)

Although brick-and-mortar retailers like Sears, Toys “R” Us and others have closed thousands of stores in recent years, grocery stores have bucked the trend. New grocery store openings were up 30% in 2018 from a year prior, according to real estate firm JLL.

“Grocery is one of the strongest retail sectors, with nearly twice as many new stores opening than closing last year,” said James Cook, director of retail research at JLL.

“When Amazon acquired us, they sort of said: ‘You’re on. Start growing again,'” Jim Sud, a Whole Foods executive, said earlier this year.

Meanwhile, Amazon is set to open dozens of its own grocery stores in major US cities separate from Whole Foods, the Wall Street Journal reported last month. Those stores will offer different, cheaper products than Whole Foods, including beauty and health items, according to the Journal.

Lidl wants to grow, too

Empty Sears and Kmart locations might also work for Lidl, a German discount chain, according to analysts.

Lidl opened its first US stores in 2017, but has struggled to gain traction.

Lidl recently adjusted its strategy. The company recently acquired 27 Best Market supermarkets around New York to gain a foothold in that market. Analysts expect Lidl to continue acquiring chains and look for quick ways to grow.

The company did not rule out moving into old Sears or Kmart stores.

“We look forward to continuing to expand across the east coast and are open to exploring all real estate possibilities,” said William Harwood, spokesperson for Lidl.