Some ‘major’ congestion atop leaderboard at The Masters, including Tiger Woods 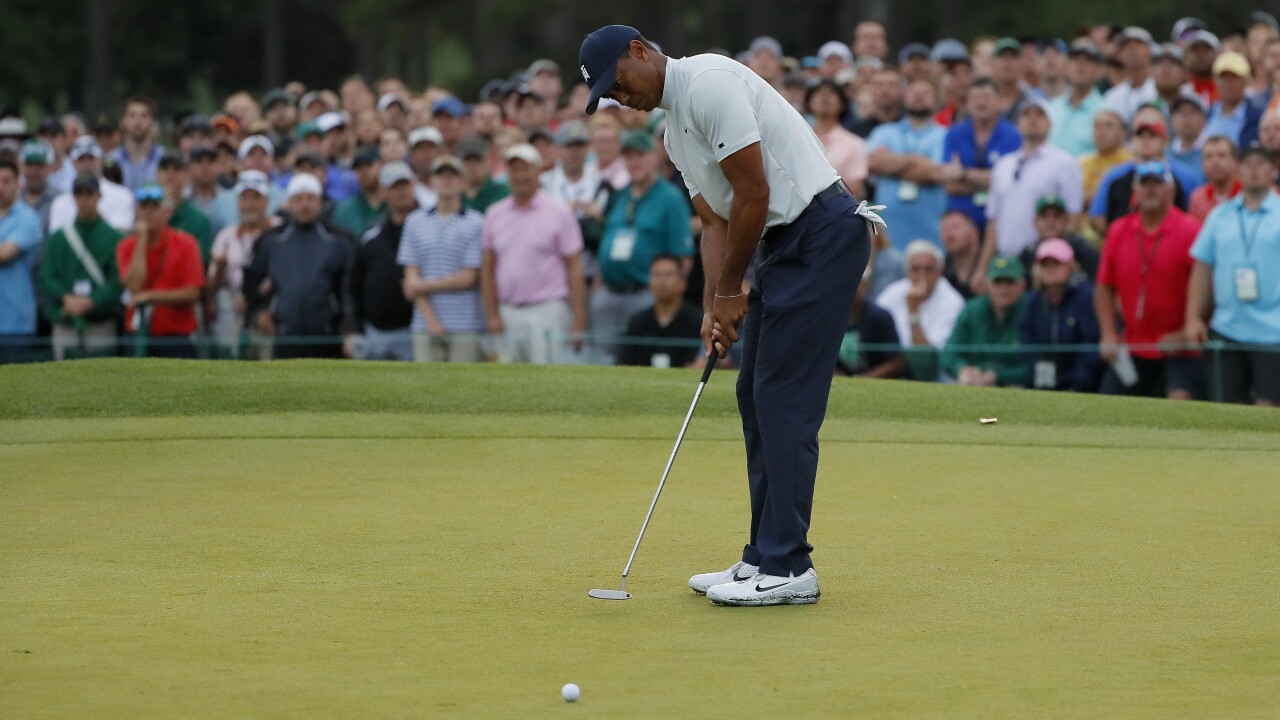 Tiger Woods putts during the second round of the Masters. (Photo by Kevin C. Cox/Getty Images)

Tiger Woods celebrates during the second round of the Masters. (Photo by David Cannon/Getty Images)

AUGUSTA, Ga. (CNN Wire) – They were Sunday roars but on a Friday. Throaty and thunderous. His fist pumps and club twirls said it all.

Tiger Woods was on a charge that not even a trip by an over-zealous security guard could stall.

The four-time Masters champion, only recently written off as a major contender, roared to within one shot of a five-way tie for the lead on an absorbing day two at Augusta.

When Woods’ birdie putt at the last stayed out the sound of deflation was palpable, but the former world No.1 is in prime position as he chases a 15th major title and first since 2008.

All proven in the heat of battle, and in 2013 Masters winner Scott and past runners-up Day and Oosthuizen loaded with serious Augusta credentials.

Still, Woods’ 68 to add to an opening 70 for six under puts him exactly where he wants to be — in contention in majors again after coming through the “dark times” of long-term back injuries.

The 43-year-old, who was second in the US PGA last year and briefly led the Open in his comeback season from spine fusion surgery, played in a manner reminiscent of his pomp, with fierce driving, pin-point iron play, some impressive recovery shots and several key putts.

He kick-started his charge with birdies on nine and 11 and had hit his tee shot to eight feet on the short 12th when the siren went to suspend play because of a threat of thunderstorms.

Tiger Woods putts during the second round of the Masters. (Photo by Kevin C. Cox/Getty Images)

When the all clear came half an hour later, Woods missed the birdie putt, and squandered another gold chance under persistent drizzle on the 13th.

But after an errant drive on the 14th, he weaved a stunning second through the trees to find the green. As Woods moved off, the crowd closed in and that was when a marshal slipped and collided with Woods’ ankle. Woods recoiled and limped off, but was none the worse for it.

Up at the green, he slid in the curving putt to send the patrons into raptures. Another wayward drive on the long 15th meant he had to lay up short of the green, but when Woods drained his birdie putt the uppercut was a vintage from 2005 when he won the last of his Green Jackets.

“It felt good to make some birdies,” he told Sky Sports afterwards.

“I kept hitting good shots and good putts — nothing was really going in. I hit two bad putts all day and they were both on the eighth when I three-putted.”

One of the first of the leaders to reach the clubhouse at seven under was Italy’s Molinari, who went round alongside Woods on his first visit to Augusta in 2006.

Molinari says he was a bundle of nerves as he shared the first tee with the defending champion, but he wasn’t playing, he was dressed in the distinctive white jumpsuit of an Augusta National caddie, lugging the bag for his older brother Edoardo,who had qualified as the US amateur champion.

Fast-forward 13 years, and Francesco, last year’s British Open champion, is in the running for a green jacket instead of a white suit.

The world No.7 hit a hot streak last year and held off a resurgent Woods in the Open at Carnoustie to clinch his maiden major title.

He then became the first European player to win all five of his matches in the Ryder Cup, winning legions more fans in his partnership with Englishman Tommy Fleetwood in Paris — the pair became known as “Moliwood.” Francesco also won the Arnold Palmer Invitational at Bay Hill earlier this season and was third at the recent WGC Match Play.

Molinari’s rise, under the long-time swing tutelage of Denis Pugh, has coincided with his decision three years ago to work with performance mentor Dave Alred, the guru behind England’s World Cup-winning rugby star Jonny Wilkinson and who also helped steer Luke Donald to golf’s world No.1 slot.

“It was pretty solid, not many mistakes, and when I missed greens I missed on the good side. Obviously a very good day,” Molinari said.

He was first joined at the top by former world No.1 Day, and then first-round co-leader Koepka, who has won three of his last six majors.

Jason Day during the second round of the Masters. (Photo by Andrew Redington/Getty Images)

Day, the 2015 US PGA champion, struggled to walk Thursday after suffering a recurrence of a back injury as he kissed his young daughter before the first round. But intensive physio helped him to a round of 67 Friday as looks to improve on second on his debut in 2011 and third two years later.

“Walking this golf course was a little bit tough but it loosened nicely,” Day told Sky Sports after round two.

“I feel good, I may bend down and give my daughter a kiss a bit differently.”

Koepka was the only man in the field without a bogey Thursday but he struggled early on Friday with a double bogey on the second before rallying to regain a share of the lead.

“It helps having three majors under your belt,” said Koepka, who missed last year’s Masters with a wrist injury.

“It gives you confidence. I like showing up on the big stages.”

Also on six under with Woods were world No.2 Dustin Johnson, fellow American Xander Schauffele and South African Justin Harding.

In golf, Saturday is known as Moving Day. The shuffling of this pack will be fascinating.