Virginia Tech focused on fundamentals, not flash in spring practice 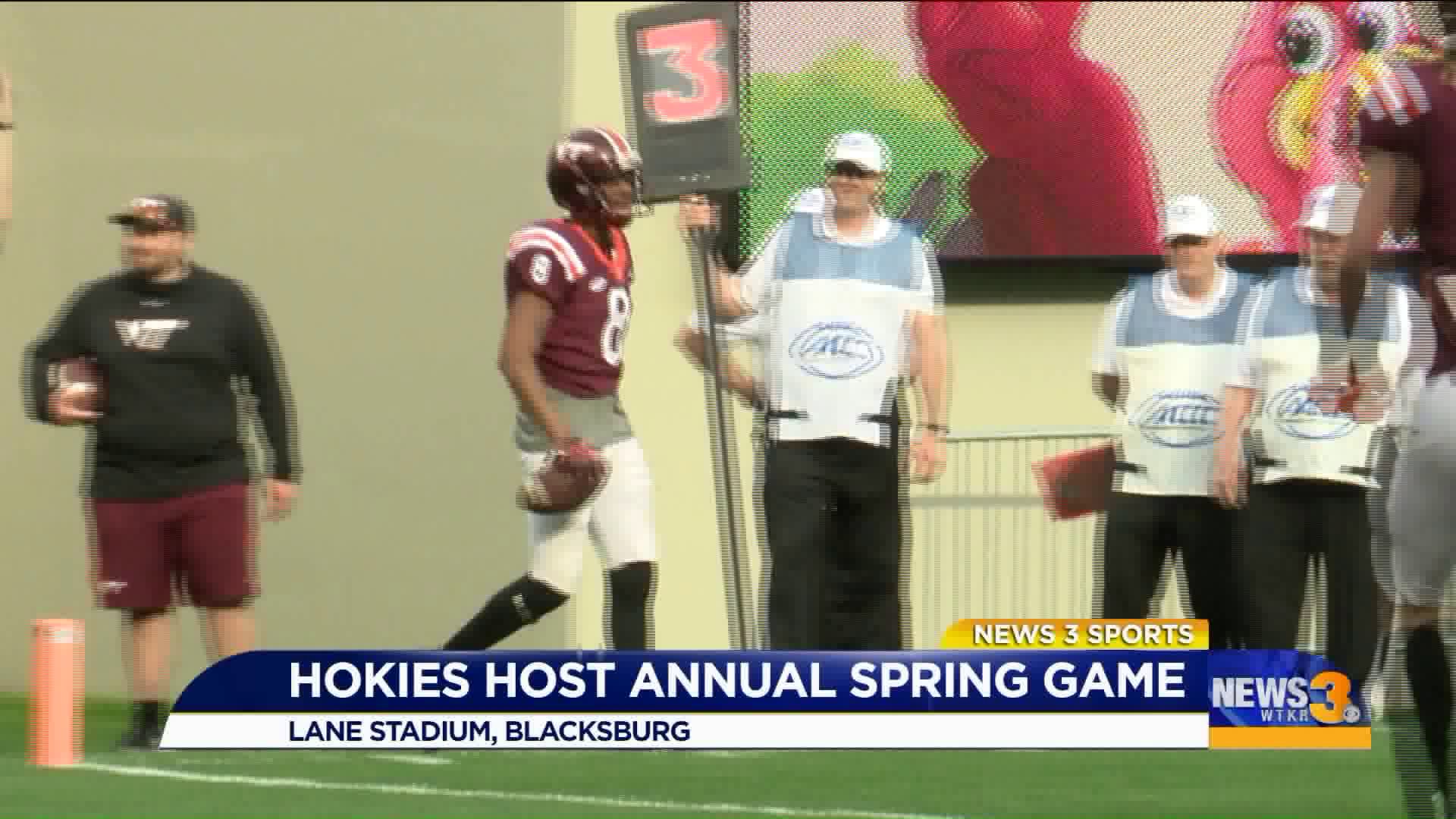 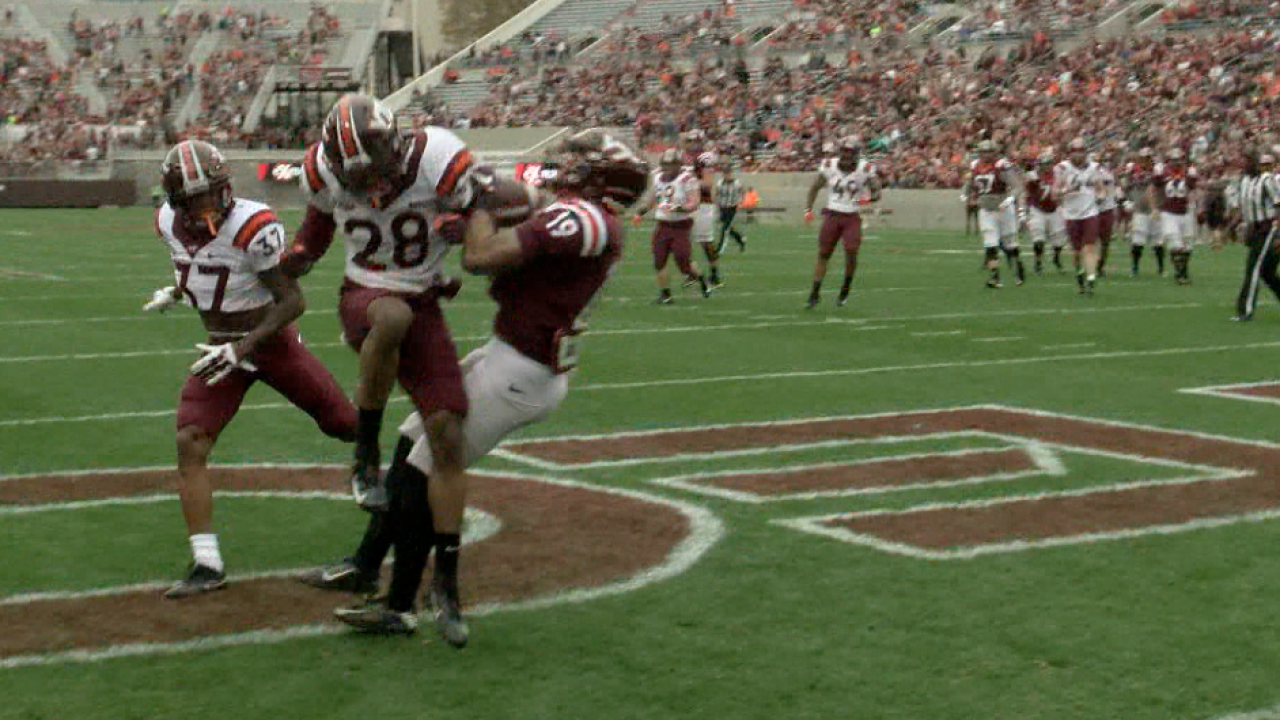 BLACKSBURG, Va. (HokiesSports.com) - The annual Virginia Tech football spring game served as more of a practice this year, as a throng of fans gathered at Lane Stadium on Saturday to watch the Hokies go through an array of scripted game-like situations.

There were also two goal-line periods, two live "coming out" periods where the offense started deep in its own end, and several two-minute situations. The second half of the game consisted of multiple periods of open-field scrimmage work.

No official stats were kept for the practice, so rather than go into a true game recap, here are some observations from the day:

WILLIS PLAYS WELL
As expected of a fifth-year senior, Ryan Willis looked really comfortable and probably is ahead in the race to land the starting quarterback job. He threw three touchdown passes – a beautiful 29-yard post pattern to tight end James Mitchell, a 62-yard post bomb to receiver Tré Turner, who beat Bryce Watts on the play, and a 3-yard pass to receiver Phil Patterson over Caleb Farley.

Willis did not go live during the practice, but only because head coach Justin Fuente said he had seen Willis play live all of last fall.

"I feel like we could have done more on the field today," Willis said after the game. "I feel like our second scrimmage a week ago was our best scrimmage. We're just scraping the surface of what this offense can be. I think we have the potential to do great things this year. We just need to continue to stay on track and do everything that we can do."

MITCHELL CONTINUES TO RECEIVE PRAISE
With Dalton Keene out this spring because of an injury, Mitchell has received plenty of reps, and the sophomore continues to impress. Despite playing with a broken finger that required surgery a couple of weeks ago, he caught several passes and even carried the ball once. Tech's staff plans to use all the tight ends – Keene, Mitchell and Drake Delulius – in multiple roles, but Mitchell, for sure, is winning the staff's trust and carving a major role for himself this fall.

"He's incredibly smart," Fuente said of Mitchell. "He's a great worker. He comes from a great family. He's very talented. He knows what he needs to work on to continue to become a better player. He's not a finished product by any means, but he can do so many things. He's very valuable.

"There are some guys that have the talent to do a bunch of different things, but they can't handle it all. But James can handle all of it. I'm really anxious to get through this spring, get that finger healed up, have a great summer and enter fall camp and see how many different places we can put him."

RECEIVERS A STRONG POINT
Tech's batch of receivers may very well be the strong point of this team. Everyone knows about Turner and Damon Hazelton, but Hezekiah Grimsley, Patterson, Darryle Simmons, DeJuan Ellis and Kaleb Smith all have shown flashes of greatness this spring. For example, Patterson's 3-yard touchdown reception was an incredible one-handed snag with Farley draped all over him.

The situation marks a stark contrast to what Fuente inherited when he took over. During his first season, he used Isaiah Ford, Bucky Hodges and Cam Phillips in a multitudes of ways, but had no depth behind them.

"I'm excited about what it can be," Fuente said of this year's group. "We have three more freshmen coming in in the summer that I think are extremely talented. We're getting there. I like it."

FLASHES FROM PATTERSON AND HOOKER
All eyes were on Quincy Patterson and Hendon Hooker during the practice, with fans wanting to see about the progress of those two. The highly touted Patterson threw a 3-yard touchdown to Hazelton and scored on a 1-yard run – both coming in goal-line situations – but Hooker probably played more consistently even though he did not throw a touchdown pass or run for a touchdown. On one drive when the offense started at its 1, Hooker led the unit on an impressive 88-yard march that ended with a Brian Johnson field goal.

Both need to continue to progress, especially Patterson, who played in a run-oriented offense in high school and needs to become more accurate as a passer.

"I definitely think I have a lot of improvement to make," Patterson admitted. "I think anyone who has been in a system that was [even] pass dominant would have a lot of work to do, but I definitely have a lot of work to do. I've been training. I've been here for a while, so they've been pushing me in that direction knowing that my high school wasn't that type of school [a passing offense]. I definitely can't use that as an excuse as to why I'm only running the ball here. It's my job to make sure that I take that next step and be that person that can really do everything."

KICKING GAME A WORK IN PROGRESS
Johnson served as the Hokies' kicker a year ago, making 12 of 18 attempts, but he struggled in the spring game, hitting just one of four attempts. In contrast, Jordan Stout made both of his attempts, connecting from 43 and 36 yards

"I like that Jordan came through there and knocked them in," Fuente said. "I still feel good about Brian. I pulled Brian to the side there, and I said, 'What's wrong?' He said, 'I feel great, Coach.' I said, 'Well, starting making some then.'

"I really like that whole room, our specialists room – from Oscar [Bradburn] to Brian and Jordan — has played a good role for us. It'll be interesting to see that [the kicking battle], as it continues to move forward."

BELMAR'S BIG DAY
Tech's staff has been seeking playmakers from the defensive end spots, and line coach Charley Wiles appears to have found a guy with that potential in Emmanuel Belmar, who recorded two sacks on the day. Granted, Patterson was the only quarterback who was live – and that was for only a few series – but Belmar appeared to be quite active.

The 250-pound redshirt junior played well at times last fall, but this spring, he and TyJuan Garbutt have been in the backfield consistently. Those two, along with a recovering Houshun Gaines (knee), leave the staff feeling more optimistic about getting pressure on the quarterback this fall. A year ago, Tech finished with just 24 sacks.

"Our d-line is getting better every single day," Belmar said. "We didn't have may sacks last year, and that's a spot that we need to improve on. We work every single day. We've got four or five more people coming in the summer, so that should help out. But yeah, sacks is what we need. Turnovers, strip sacks … all that."

NEXT WEEK
The Hokies wrap up spring practice with three practices this upcoming week. Tech will practice Tuesday, Thursday and Friday.