Tiger by numbers: A major victory nearly 4,000 days after his last

It was never meant to happen. And yet, it did. It was the major victory many had long since accepted would never happen again — 3,955 days after his last major triumph.

Since Tiger Woods won the 2008 US Open at Torrey Pines, 31 different players have claimed golf’s big four. And as he holed the putt that brought to an unlikely end a drought that few had foreseen and even fewer foresaw being broken, the 15-time major winner crept one step closer to Jack Nicklaus’ unrivaled 18 titles. Fourteen years after his last Masters win, it represented the longest ever gap between victories at Augusta. At 43, Woods became the oldest champion since Nicklaus himself.

It has been a most curious battle for golf’s ultimate statistical supremacy; when Woods won his 14th major as a 32-year-old — all of which had been collected within a 11-year golden streak — there seemed little doubt that Woods would not just surpass Nicklaus — The Golden Bear — but fly past his personal record in such a way that there would be no possible debate around the sport’s greatest player.

As it is, though, Nicklaus remains the man in possession. Nobody has claimed more major wins and, until Francesco Molinari located the treacherous water on Augusta’s famed Golden Bell 12th hole, it seemed that his tally would remain unchallenged. 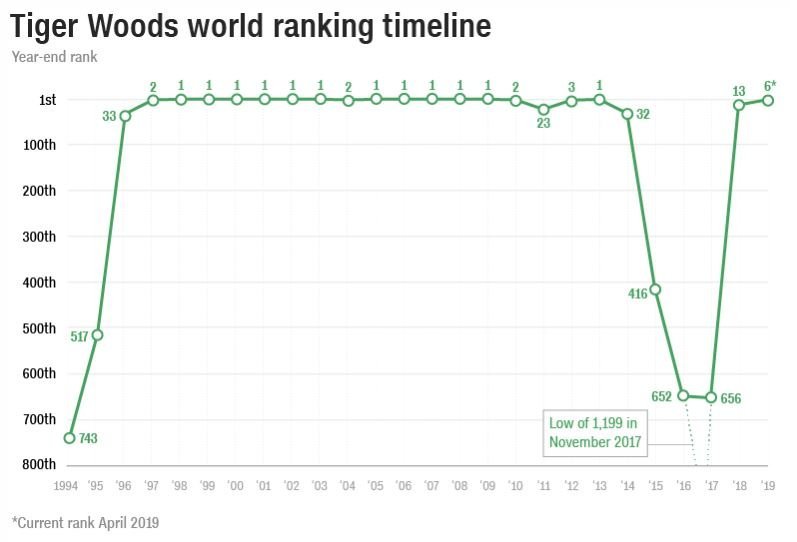 But now, who knows? Golf’s young stars have long stated of their desire for a battle with the ‘old Tiger,’ the man who dominated his sport with a stranglehold like few have ever held until personal problems and career-threatening back injuries took their toll. The winner of the Silver Medal, the award for the tournament’s top amateur, went to Viktor Hovland. The Norwegian was not even born when Woods first won at Augusta.

Woods’ eyes will now surely turn to the PGA Championship — brought forward this year to May — at Bethpage and to June’s US Open at Pebble Beach. Woods has won at both courses.

The bookmakers certainly think there’s a chance; Woods has been positioned as favorite for the year’s three remaining majors.

If it feels like a far-fetched thought, then so did a fifth green jacket. Indeed, after the 2017 Masters, Woods — arguably the greatest player of all time — was the world’s 780th-ranked golfer.

It was a staggering statistic at a difficult time for one of sport’s most significant icons. Even talk of this victory as one of sport’s finest ever comebacks feels somewhat out of place, given Woods’ place as, perhaps, golf’s ultimate player.

But, in November 2017, Woods was ranked 1,199 in the golfing world — a low amid a period of lows. It was assumed, with some justification, that his powers had not just waned, but fallen away for good.

His win at the 2018 Tour Championship was his first in any PGA Tour event since 2013. Rather than a sign of how far he had fallen, that win would prove a springboard. Woods entered the Masters as the world No.12 — the highest-ranked green jacket-holder in the entire draw.

None of those above him had tasted success at one of golf’s most feted venues. A week later, the same is still true; Woods has risen to No.6 in the world — the first time he has entered the top 10 since 2014.

A story that defies logic both emotionally and statistically: Tiger Woods, the 2019 Masters champion.