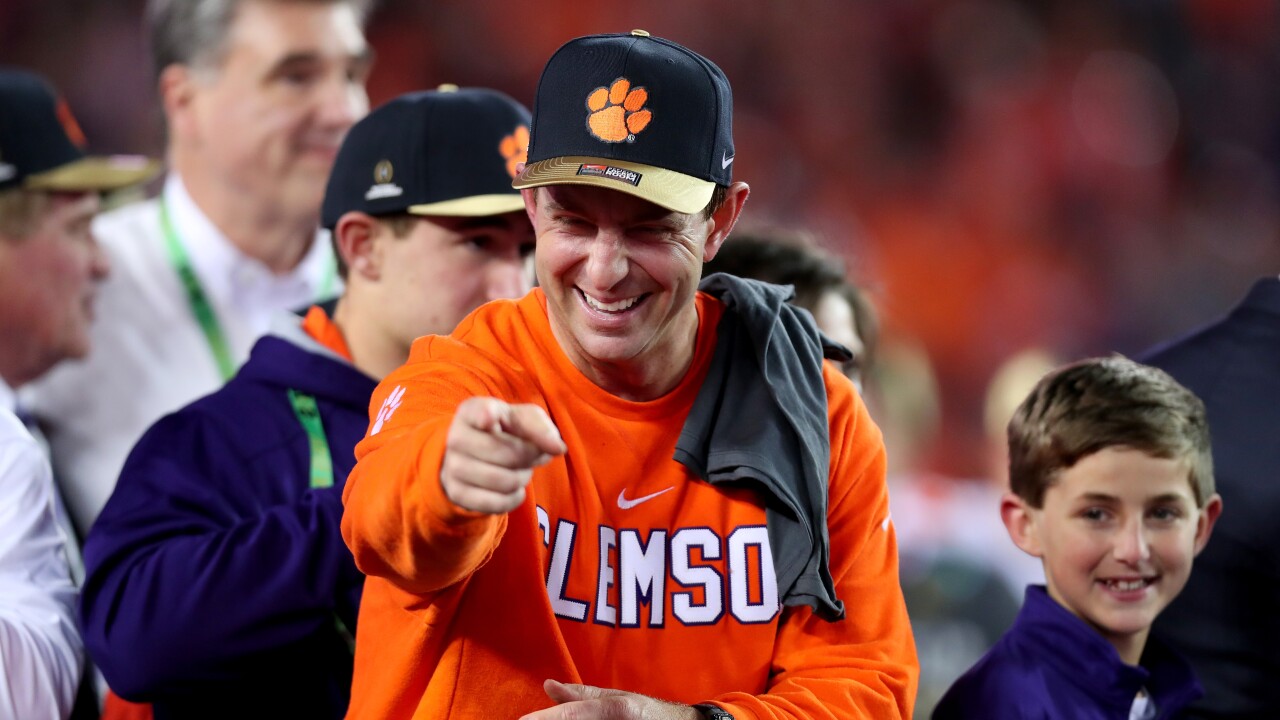 Clemson Head Football Coach Dabo Swinney and the University have agreed to a new ten-year contract through 2028, it was announced today by Director of Athletics Dan Radakovich. Terms of the contract were approved earlier today by the Clemson University Board of Trustees’ Compensation Committee.

According to CBSSports.com, the deal is worth $93 million. Swinney will earn $8.25 million in 2019, and his salary will increase incrementally up to $10 million in 2027 and 2028. It is the richest coaching contract in college football history.

Swinney guided the Tigers to two of the last three national championships, including a 44-16 victory over Alabama in the most recent College Football Playoff National Championship played in January. The 2018 team was the first program in the modern era to finish a season 15-0, and Swinney stands as one of only two active coaches in the country with multiple FBS national championships to his credit.

“I am grateful and humbled by the incredible commitment Clemson has made to me, my family and our football program,” Swinney said. “For more than a decade, we have given our all to provide this world-class university and our incredible fans the championship football program they deserve – to live up to Best is the Standard. With this contract, we make a collective statement that we intend to continue pursuing championships and developing total student-athletes for years to come. Our sustained continuity in vision, people and culture has been a key ingredient to our success, on- and off-the field. I am thankful for the leadership we have at Clemson and appreciate all they do for Clemson Football. I am truly blessed to be your Head Football Coach.”

In addition to earning the 2018 ACC Coach of the Year and the Woody Hayes Award as national coach of the year from the Touchdown Club of Columbus, Swinney captured the Paul “Bear” Bryant Award for the third time, becoming the first three-time honoree in the award’s history. During the last four seasons of the program’s active eight-year streak of ten-win seasons, Swinney’s Tigers have captured four consecutive outright ACC titles (the first program ever to do so) and four consecutive College Football Playoff berths, while tying for the national lead with 55 wins in that four-year span.During Swinney’s tenure, the success of Clemson football student-athletes transcends the titles on the field. Twenty-six players on the 2018 National Championship game roster competed having already earned a degree. Over his ten full seasons as head coach, over 97% of senior lettermen earned a degree and his 2018 squad set program records for cumulative team GPA and for the number of student-athletes who earned a GPA of 3.0 or above. Their efforts in the classroom earned the program the American Football Coaches Association Academic Achievement Award for the first time in school history.

Swinney is entering his 17th overall season at Clemson, having completed five full seasons as an assistant coach from 2003-07, serving as the interim head coach in 2008 and ten full seasons as head coach from 2009-18. His 116 head coaching wins at Clemson rank second all-time and place him as one of only two football coaches in school history, along with College Football Hall-of-Famer Frank Howard, to reach the century mark in the category.