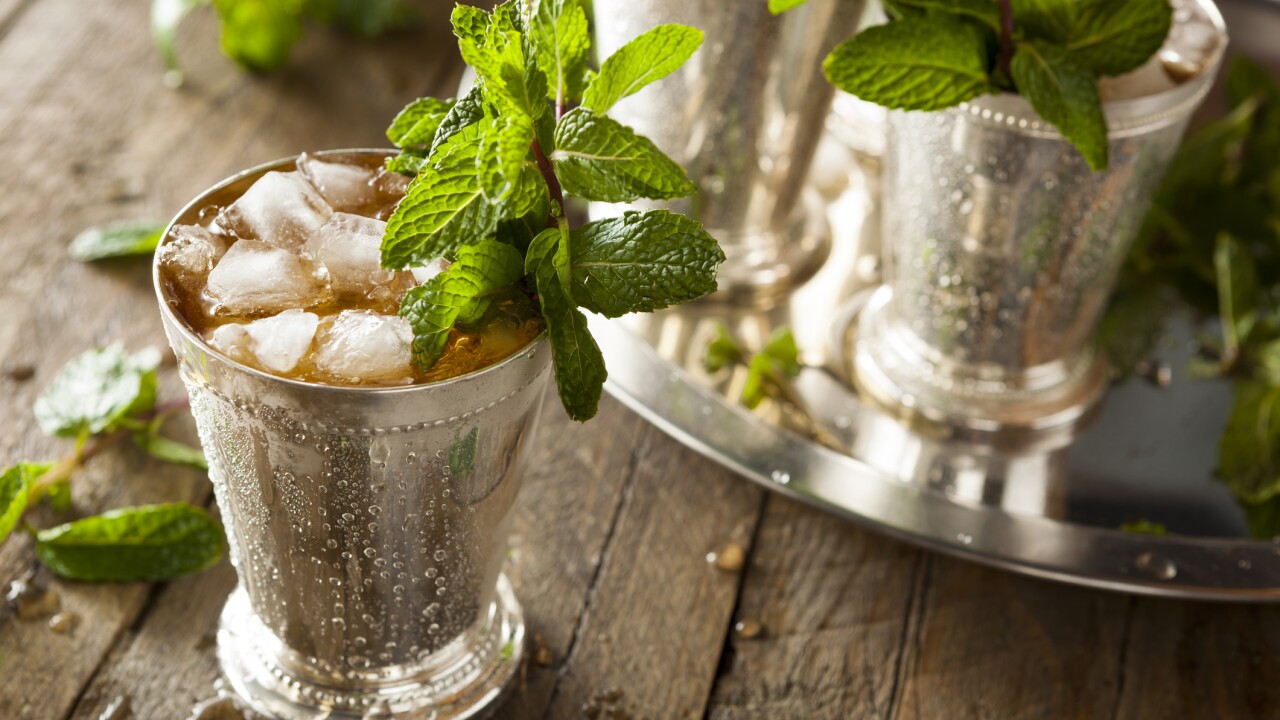 The refreshing mint julep has been the traditional drink of the Kentucky Derby since the 1930s, but prices have galloped upwards since then.

It is estimated that about 127,000 of the popular bourbon-based cocktails are served over the two days of the Kentucky Oaks and Kentucky Derby festival at Churchill Downs each year.

That calls for about 10,000 bottles of ready-to-serve Old Forester Mint Julep, while about 475,000 pounds of crushed ice and 2,250 pounds of fresh mint will go into making the crowds’ favorite tipple.

Or, to put that into perspective, the amount of mint used is heavier than a grand piano.

The standard mint julep costs $15 on Derby Day and comes with a souvenir glass, but punters with deep pockets can splash out up to $2,500 on a deluxe version in a fancy cup etched with the twin spires motif of Churchill Downs.

Made with Woodford Reserve bourbon, 125 silver cups handcrafted by a Louisville jeweler will be available for $1000 with another 20 available in gold cups with a silver sipping straw for $2,500 — proceeds of which go to a different charity each year.

Due to its soaring popularity, almost all cups have been sold already this year, except for a small number of silver cups which are held back for purchase at the track.

“It’s become its own tradition. People clamor to buy these cups, there is always an interesting narrative about the cups and it’s such a fun way to raise money for charity,” Chris Poynter, from Woodford Reserve, told CNN Sport.

Punters who splash out on one of the premium cups are also treated to a VIP experience at the track.

Before being presented with their purchase, they walk a red carpet and watch as the cup is made live in front of them with etchings from the narrative of the day.

Honoring the best of Kentucky

Woodford Reserve have been making the drink for the last 14 editions of the iconic race and each year they think of adventurous ways to make it more exciting.

For the last 145 days, they have been aging honey for the recipe in one of the famous twin spires at Churchill Downs.

“We have done some crazy things over the years. We’ve flown in ice from the Antarctic, for example,” revealed Poynter.

This year, everything has been kept local in order to “honor the best of Kentucky”. The bourbon, honey, ice have all been sourced from within the state and the mint has been grown at Churchill Downs itself.

Want to make your own version of the classic mint julep?

Follow the instructions in our video and all you’ll need are the ingredients below to get you started.