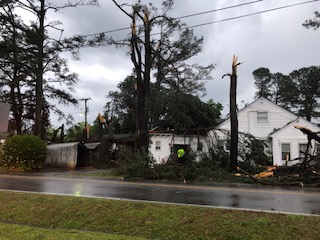 SUFFOLK, Va. – The National Weather Service confirmed Sunday that a tornado touched down in Suffolk Saturday night as storms rolled through the area.

Emergency Communications was first contacted at 6:53 p.m. when a citizen called to report a tree down in front of a business in the 500 block of Constance Road.

Damages to six businesses include blown windows and issues with HVAC units on roofs, officials say.

No injuries have been reported at this time.

Only MacArthur Drive remains closed to through traffic at Wilroy Road due to low-hanging utility lines and debris removal.

Officials were contacted at 7:03 p.m., regarding a residential structure fire in the 1800 block of Nansemond Parkway. The first units arrived on scene at 7:12 p.m.

Once officials arrived they found heavy fire in the attic area of the brick ranch. The residents had evacuated prior to the arrival of firefighters. Crews were able to rescue a dog from the residence and there were no injuries reported.

Four occupants have been displaced and will be assisted by the American Red Cross. The fire was called under control at 7:53 p.m. The Fire Marshal’s Office will be handling the investigation as to the cause of the fire.

This information is preliminary in nature and further information will be provided when crews are able to further assess damages in the area in the morning.

If anyone has experienced any damages related to this weather system, please contact Non-Emergency Dispatch at (757)-923-2350.